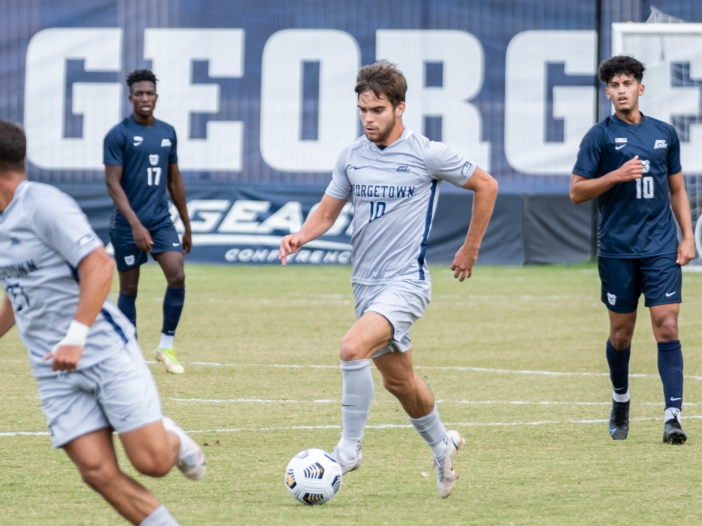 On Saturday, Oct. 23, the No. 2 Georgetown men’s soccer team frustrated an explosive Xavier University squad in a decisive 3-1 road victory in Cincinnati. Despite skillful play from the Musketeers, the Hoyas dominated the scoreboard in a poised effort led by a breakout performance from junior forward Will Sands.

Xavier (8-7, 2-6 Big East) found the back of the net for the first and only time 14 minutes into the match. The goal was successful thanks to a well-placed header from forward Karsen Henderlong, assisted by midfielder Paul Bogarin. Despite the Hoyas (13-1, 7-1 Big East) controlling possession, the Musketeers’ second dangerous attempt came soon after, as a shot from defender Pol Hernandez forced a difficult save from graduate goalkeeper Ethan Koehler.

While the Musketeers scored first, they struggled to compete with Georgetown’s dominance of the pitch. The frustration from Xavier was evident as rising tensions between the Xavier coaching staff and the referee resulted in a stoppage of play and shared words between Xavier head coach Andy Fleming and the referee.

Throughout the first half, the Hoyas displayed controlled aggression, created consistent opportunities and chose to take the extra pass. Georgetown’s discipline finally paid off in the 42nd minute with Sands’s first goal of the night, assisted by a long ball from sophomore forward Marlon Tabora. The strike gave the Hoyas much needed momentum as an exciting first half came to a close.

To start the second half, Georgetown came out aggressive, recording a corner kick just two minutes into play and maintaining possession in Xavier’s half of the pitch. The Hoyas earned their first lead of the game ten minutes into the second half when Sands recorded his second goal of the night and third of the season. Sands’ heads-up strike came off a deflected shot from the powerful boot of senior forward Zach Riviere, putting Georgetown up 2-1.

“It’s nice to have different players step up each night and tonight was Will Sands’ turn with a career performance,” Wiese said in a post-game interview with The Hoya.

The final point was delivered by Georgetown’s graduate midfielder Chris Le, who scored a rebound goal from a ricocheted shot from Sands. The Hoyas then brought the match to an undramatic close in a second half shutout of the Musketeers.

Another bright spot for the team was the leadership and play of junior midfielder Dante Polvara, last year’s team MVP. Recording two shots and one on goal, Polvara made his presence known in center field with direction of traffic and physical play.

Despite their loss, Xavier showed explosiveness and managed to put the Hoyas on their heels with a strong performance throughout the match, according to Wiese.

“You need to give a lot of credit to Xavier, they have some of the better attacking players in the league that we really needed to manage,” Wiese said. “To go down at Xavier and find a way back is a huge result for our guys.”

While Xavier’s big play potential showed on tape, Georgetown led in almost every major category: They recorded six more shots, five more shots on goal, and twice the corner kicks. Moreover, all of the Musketeers’ shots on goal came in the first half and their defense began to crack under the strain of consistent Hoya pressure.

Xavier will look to bounce back on the road against the University of Connecticut (6-5-2, 2-4-2 Big East) next week to salvage their disappointing season. As recognized by Coach Wiese, the Musketeers have plenty to be excited about in the play of their attacking front and will be sure to rely on it in the coming weeks.

The Hoyas hope to extend their three-game win streak on the road against Marquette University (6-8-1, 3-5-1 Big East) on Oct. 30 before returning home to face UConn the following week. Neither team should prove much of a headache for the formidable Georgetown squad, but the disciplined team will be sure to play hard and poised.