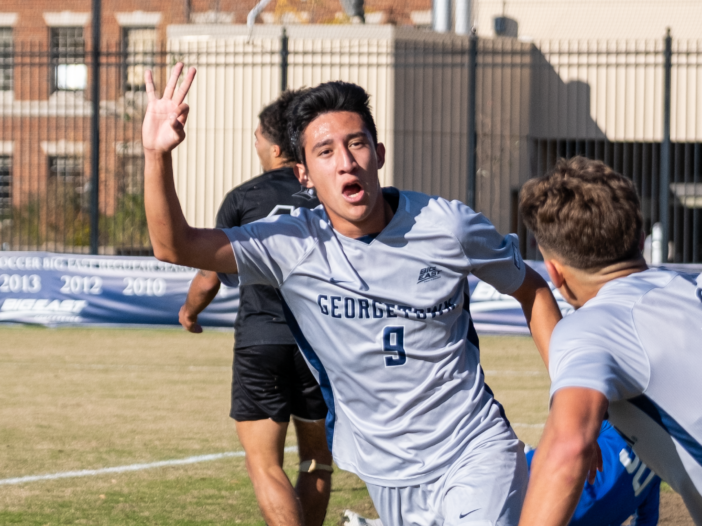 On Nov. 28, sophomore forward Marlon Tabora led the Georgetown men’s soccer team with three goals and an assist, propelling the Hoyas to a dominant 4-1 victory over the Providence Friars and into the quarterfinals of the NCAA tournament.

Though most Georgetown University students were still away on Thanksgiving break, fans still poured in for the 12 p.m. kickoff to witness a rematch of the 2021 Big East tournament championship thriller in which Georgetown came out on top 2-1. Providence fans were also out in full force; by kickoff, there was not an empty seat in the stadium.

The Friars dominated the possession battle early, holding the ball at midfield and looking to pick the Hoyas apart down the wings. Junior forward Will Sands managed to cause problems for the Friars down the left side of the field, whipping some dangerous balls into the box. Sands is fresh off his first selection to the All-Big East First Team.

Neither team mustered a shot for the first 30 minutes of game action until the Hoyas struck first with 10:43 remaining in the first half. The Friars fouled senior forward Zach Riviere, setting the Hoyas up with a free kick deep in Providence territory. Tabora, a recent substitute, stepped up to take the kick. His left-footed strike bounced off the chest of the Friar goalkeeper and onto the foot of junior midfielder Dante Polvara, who slotted it home to put the Hoyas up 1-0.

Providence continued to challenge through the end of the period, holding possession in the Georgetown half, but was unable to capitalize on a few decent chances. The Hoyas went into halftime still up 1-0.

Head Coach Brian Wiese commented on Providence’s strong effort in the first half. “I thought Providence came out in the first half and outworked us,” he said in an interview with The Hoya after the game. “1-0 at halftime was a really happy scoreline but not one [we] really earned.”

The second half opened with some controversy as Georgetown senior goalkeeper Giannis Nikopolidis rose up to handle a Providence long ball and made contact with the Friars’ striker. Nikopolidis wanted a yellow card but was forced to settle for a foul call, setting the tone for a chippy 45 minutes of play.

In the 53rd minute, Tabora made his presence felt again, blasting a flying volley into the back of the net to give the Hoyas a commanding 2-0 lead.

Providence responded by earning a corner, but the Friars’ attempt on goal rose up over the net. On the other end, Hoya sophomore midfielder Chris Hegardt sent a scorpion kick into the box for Riviere, who chipped the ball over the Friar goalkeeper and off the crossbar. Tabora was positioned to guide the rebound into the back of the net, putting the Hoyas on top 3-0.

Shaw Field erupted as Tabora rejoiced with Hoya fans behind the Providence goal.

The Hoyas fired on all cylinders with a high-motor press that won them the ball in the Friar half. With 26 minutes left to play, junior midfielder Aidan Rocha gathered an overlap right outside of the Friar 15-yard box. Rocha sent a cross to the near post for Tabora, who poked the ball past the Providence keeper for the hat trick. The Hoyas led 4-0 and never looked back.

Providence denied the Hoyas a clean 4-0 win, scoring off a header in the 87th minute and the game ended as a 4-1 win for Georgetown. Tabora turned in a historic performance, scoring three of the Georgetown goals and assisting a fourth. Tabora is a homegrown talent who played high school soccer in nearby Bethesda, Maryland, and his family saw his hat trick in person, making it that much more special.

“My whole family that lives here were in the stands,” Tabora said in an interview with the Hoya. “It feels so good having them come watch me and be able to see that today.”

The Hoyas look to keep the ball rolling against West Virginia in an NCAA quarterfinal matchup Saturday, Dec. 4 at 12 p.m. The game, which will take place at Shaw Field, will be broadcasted on ESPN+.