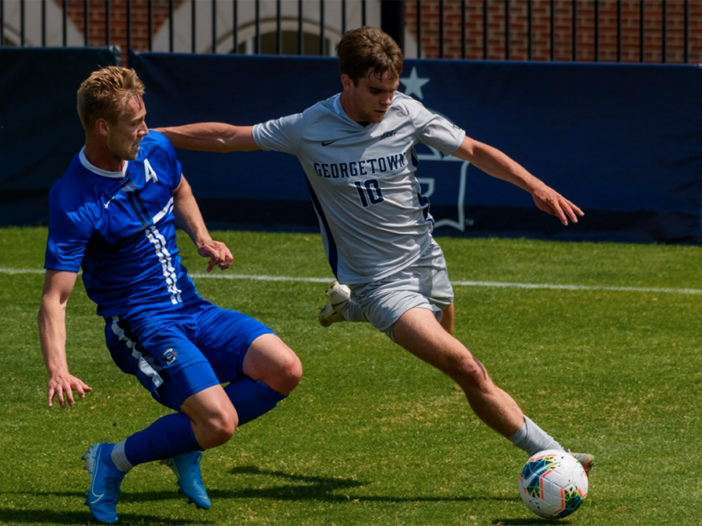 After 80 minutes of play during Georgetown men’s soccer semifinal matchup against the Creighton Bluejays, neither team had been able to finish on the offensive end. Both teams looked for an elusive goal to book their ticket to the Big East tournament championship but failed to find the back of the net. Then, a powerful shot from the corner of the penalty box from junior midfielder Joe DaLuz in the 84th minute powered the Hoyas to a narrow victory over the Bluejays.

The No. 2 Hoyas (8-0-2, 7-0-2 Big East) earned their fourth consecutive trip to the tournament championship game thanks to DaLuz’s first career goal. Despite a poor offensive first-half showing in which the Bluejays (6-6-0, 5-3-0 Big East) outshot the Hoyas. Creighton finished second in the Big East’s Midwest division, while Georgetown came out on top. The temporary divisional structure this season, implemented to minimize travel risks because of COVID-19-pandemic concerns, meant that the Hoyas had not faced off against the Bluejays since a draw in 2019.

The matchup between two of the highest-scoring teams in the Big East this season, in terms of goals per game, was expected to feature lots of offensive firepower. Instead, strong play from both Creighton goalkeeper Paul Kruse and Georgetown junior goalkeeper Giannis Nikopolidis, who was named the Big East Goalkeeper of the Year earlier this week, controlled the score of this matchup.

Georgetown struggled in the first half. The Hoyas were outshot by the Bluejays 4-1 and unable to create enough space to see valuable looks in the offensive end. Despite the Hoyas ranking 15th in the nation in shots per game this season, they entered the locker room at halftime having logged just one shot.

Creighton’s best offensive chance came in the 22nd minute of the first half when Big East Offensive Player of the Year forward Diego Gutierrez broke through Georgetown’s defense and made his way into the penalty area off a long throw-in by midfielder Callum Watson. Gutierrez dribbled into the box, where first-year Georgetown defender Kenny Nielsen stopped him in a questionable no-foul call that left both Gutierrez and the entire Creighton bench up in arms about the lack of a call from the referees. Neither team was able to open up the scoring in the first half, and the game remained goalless at halftime.

The Hoyas attacked much more efficiently in the second half, logging seven shots, but also allowed the Bluejays to shoot eight shots. Georgetown managed to create more high-quality opportunities in the second half, forcing Kruse to record three shots to keep Creighton in the game.

After the 75th minute, Georgetown seemed to find its rhythm on offense. After taking three shots within five minutes, the Hoyas were unable to find the back of the net and open up a lead. With just seven minutes remaining, the game seemed likely to enter golden-goal overtime at a stalemate.

But in the 84th minute, senior midfielder Paul Rothrock won the ball off a challenge at midfield and began dribbling towards the Creighton goal with his eyes set on earning a Georgetown victory in regulation. With a pass to his left, he found a wide-open DaLuz, who launched a rocket from just inside the penalty box to score his first career goal, giving the Hoyas a lead with just five minutes left in the game.

The Bluejays managed to create pressure toward the end of the game with three shots in the last five minutes, but strong defensive and goalkeeper play for the Hoyas iced the victory. Georgetown extended its undefeated streak to 27 games and looked to continue this winning momentum and earn a second consecutive national championship.

Although the Hoyas were outshot for the first time all season, DaLuz’s goal proved to be the difference in this matchup. Nikopolidis proved once again why he earned the title of Big East Goalkeeper of the Year; without his dominant shutout performance in goal, the Hoyas would not have eked out such a narrow victory.

The win set up a matchup between the Hoyas and No. 11 Seton Hall (8-1-3, 5-1-2 Big East) on April 17 to determine the Big East’s automatic qualifier spot in the NCAA tournament. Regardless of the game’s result, the two top-15 teams seem destined to earn a spot in the tournament and look to make late runs for a national championship.