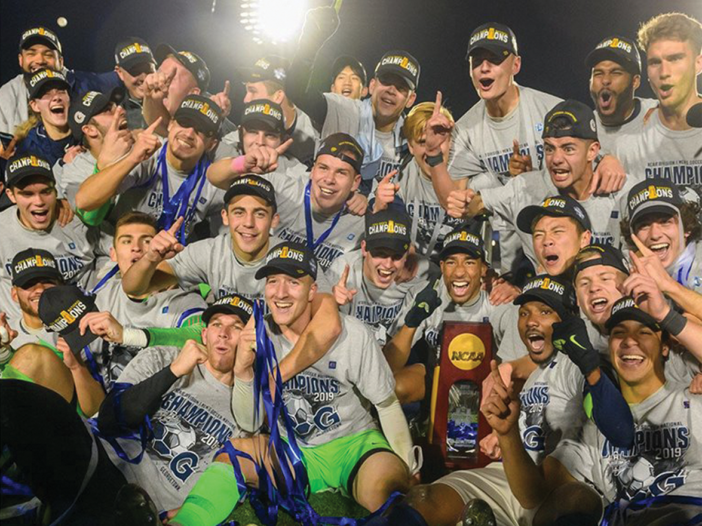 Fourteen months after the Georgetown men’s soccer team captured its first national championship, it is hoping to earn the title for a second time as it kicks off its season.

Back in September, the NCAA announced the men’s soccer national championship would be postponed until the spring, and regular season competition was to be played from February through April. The Big East announced its altered schedule Jan. 19, in which conference play is limited to intradivision competition only. The Hoyas have been placed in the east division, where they are set to compete against St. John’s and Providence, both of whom made it to the third round of the NCAA Division I Men’s Soccer Tournament last season, as well as rivals UConn, Villanova and Seton Hall.

The NCAA Tournament, limiting its field to 36 as opposed to the traditional 48 teams, is set to take place in May, with the College Cup semifinals and finals happening from May 13 to 17 in Cary, N.C. If the Hoyas are able to repeat as champions, they will be lifting the trophy May 17 in Cary, 17 months after they won their first title in the same location.

The Hoyas are set to preview their season with two exhibition games Feb. 10 and Feb. 13, against Virginia Commonwealth University and the University of Pittsburgh. The Panthers are looking to redeem their 5-0 loss to the Hoyas in the first round of the 2019 NCAA Tournament.

The Hoyas then have three non conference matchups with local teams before starting conference play in late February. Georgetown will begin its season on the road playing George Washington University, having not played the crosstown rival in 14 years. This game is set to kick off at 1 p.m. on Feb. 16.

Next, the Hoyas will play their first home game Feb. 19 against James Madison University, who is looking to reach the tournament after losing in the first round in 2019. Georgetown’s final non conference matchup has the Hoyas taking on the George Mason Patriots at Shaw Field on Feb. 23.

The Hoyas will then turn to their conference opponents, looking to repeat as conference champions for the fourth consecutive season. The Hoyas seem poised to do so and were selected to finish atop the East Division standings in the Big East Preseason Polls. The pandemic-afflicted lineup has the Hoyas playing each divisional opponent at home and on the road.

Georgetown opens its season on the road against Villanova on Feb. 27. The Hoyas’ conference home opener, although sadly without the atmosphere of fans cheering on the defending champions, will take place March 3 as the Hoyas clash with Seton Hall. The Hoyas will close out their regular season against St. John’s on April 10. The Big East tournament will then take place from April 14 to 17, hosted by the team with the highest overall record in the Big East season. With strong gameplay from the Hoyas, who are hoping to mirror their undefeated conference mark from the 2019 season, Shaw Field could play host to this tournament come April. The Hoyas’ full schedule is on the GUHoyas website, along with game times and viewing information.