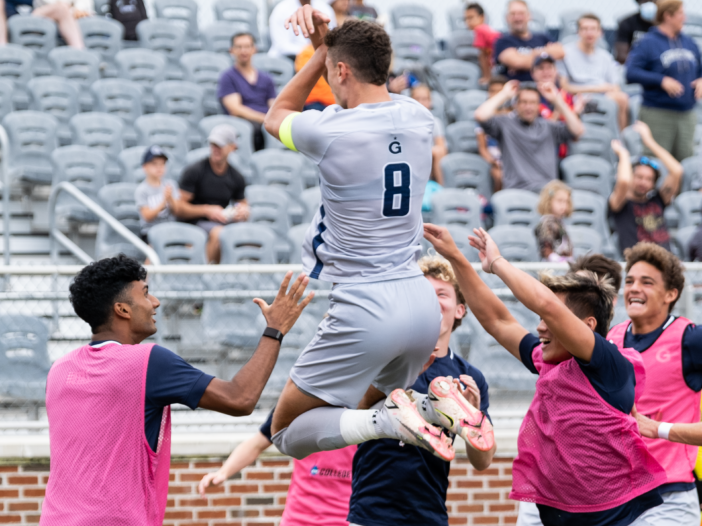 On Saturday, Oct. 9, the No. 1 Georgetown men’s soccer team upheld their unblemished record with a victory over Big East competitor Butler University at Shaw Field. A second-half strike by junior midfielder Dante Polvara clinched the only goal of the game, lifting the Hoyas over the Bulldogs in a 1-0 victory.

In the first half, both Georgetown (10-0-0, 4-0-0 Big East) and Butler (3-6-1, 1-2-0 Big East) encountered difficulties capitalizing on goal-scoring opportunities. Though the Hoyas went on to outshoot the Bulldogs 14-7, neither squad was able to find the back of the net in the first 45 minutes of play.

In a dominant display of possession throughout the first half, Georgetown recorded 11 corner kicks to Butler’s one. However, the Hoyas did not convert a single one of these into a goal.

Georgetown finally found its shining opportunity in the 59th minute when Butler midfielder Quint Breitkreuz fouled Polvara on the edge of the box. Officials issued Breitkreuz the lone yellow card of the match and Polvara hammered the resulting free kick into the top corner to grab the goal for Georgetown. The Hoyas held on to the 1-0 lead, despite a challenge from Butler in the final minute of play.

Head Coach Brian Wiese said that the Hoyas have room for improvement in their offensive gameplay.

“The serves weren’t quite as good as they could be; we had some really good chances that didn’t miss by much,” Wiese said in a postgame interview with The Hoya. “It was just that little bit of crispness we were missing.”

Although neither the Hoyas nor the Bulldogs had their best offensive performance, their defensive units put on a commendable show. For Georgetown, junior defender Daniel Wu and sophomore defender Kenny Nielsen anchored the back line, playing for the full 90 minutes of regulation. Junior forward Will Sands, acting in a defensive capacity, and junior midfielder Aidan Rocha also played the entire game. For his efforts, Sands was crowned the Big East Defensive Player of the Week.

Despite the performances of the squad’s regular rotation, Wiese was quick to note that the team’s success often hinges on the capabilities of substitutes and having depth in the roster.

“You see our reserves are doing a good job getting us the quality we need,” Wiese said. “These guys all come on and maintain the standard, if not lift it.”

The Hoyas’ defensive master class included another strong performance from graduate student goalkeeper Ethan Koehler, who recorded the win with a clean sheet and two saves. Across four games played this season, Koehler has conceded only one goal and completed 12 saves.

Wiese said that although his defense is consistently reliable, a busy game schedule can also take a toll on his athletes’ performance.

“What you saw today was a feeling of some tired legs from the Seton Hall game. Seton Hall felt great, but with only two days in between games and getting back late, it was really predictable that we weren’t going to be as sharp,” Wiese said. “Three days between games from here to Providence is going to feel like a summer vacation.”

The Providence matchup will be a challenging one for the Hoyas, according to Wiese.

“I think Providence is the team to beat in the league, based on what I’ve seen so far. They’re really talented,” Wiese said. “They’re really good on set pieces, too. They check all the boxes for what you have to worry about and we’re at their place, so we’re going to have to be really sharp to get the result.”

Following the trip to Rhode Island, the Hoyas will return to Shaw Field on Saturday, Oct.16 to square up against another Big East opponent, Villanova (8-3-0, 4-1-0 Big East).