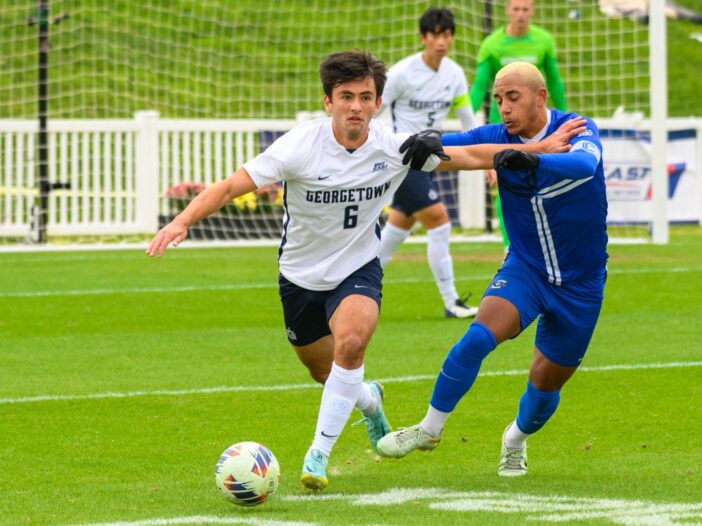 In the blink of an eye, Georgetown University found itself in a 0-3 hole against Creighton University that it ultimately failed to overcome. After conceding two goals in the first minutes of the second half, the Hoyas had no answer for Creighton and settled for the second-place finish in the Big East tournament.

The No. 1 Georgetown men’s soccer team (11-5-3, 8-1-1 Big East) fell short of a sixth Big East championship in a 0-3 defeat to the No. 6 Creighton Bluejays (9-4-6, 3-3-4 Big East) on Nov. 13. This historic match marks the first time that a sixth-seed has won the Big East tournament, guaranteeing the Bluejays a berth in the NCAA tournament. Big East Offensive Player of the Year Duncan McGuire was once again on the score sheet after netting four goals in Creighton’s semifinal win over Butler University, tying the record for most goals ever scored in the tournament with six and rightfully earning the Most Outstanding Offensive Player honor.

The Hoyas came out of the gates strong, enjoying most of the possession in the first ten minutes and seemingly setting themselves up for another strong performance. However, Creighton midfielder Alejandro Maillet rifled a shot into the roof of the net past the helpless gloves of Georgetown junior goalkeeper Ryan Schewe. Though a tussle in the box raised the question of a potential foul on Georgetown midfielder Aidan Rocha, no foul was given, and Creighton took a 1-0 lead.

This early blow energized the Creighton squad, leading to a more balanced first half with both sides desperately searching for the key to break the opposition down. Roughly 15 minutes into the match, Rocha kicked in a beautiful cross with pinpoint accuracy to the head of first-year striker Jacob Murrell, who nestled it nicely into the far corner before the referees called the play offsides.

Just 15 minutes later, the wing’s strong service again found Murrell at the back post, but a stupendous leap from Creighton keeper Paul Kruse denied the Hoyas from finding their equalizer. On an otherwise fairly comfortable night for Kruse, this spectacular save was instrumental in keeping Creighton’s narrow advantage heading into half time and was enough for him to claim the Most Outstanding Defensive Player honor.

Throughout the rest of the half, Creighton dominated possession of the ball, whereas the Hoyas made a number of offensive substitutions to attempt to find some cohesion as an attacking unit. A poorly placed cross by Creighton substitute Luke Waters almost punished the Hoyas, who were relieved to see the ball dink off the crossbar. Despite their struggles in the first half, the Hoyas were still in the game, one good chance away from an equalizer.

However, in the 47th minute, a long ball from defender Jake Ashford found striker Duncan McGuire, who took the ball in his stride superbly and slotted it neatly into the far corner. This was his 19th goal of the season, making him the top scorer in Division I. Seconds later, Georgetown was caught on the break once again when Creighton midfielder Giorgio Probo scored after his own rebounded shot dropped kindly at his feet. This was the nail in the coffin for the Hoyas, who failed to pose a serious goal threat for the rest of the match.

After the match, Georgetown Head Coach Brian Wiese said he was happy with the effort from the team despite the loss.

“The effort was great,” Wiese said in an interview with The Hoya. “The wind conditions were a factor today, which made it harder for probably both teams to do some things, but we actually dictated, I think, a lot of the terms of the game.”

Though the Hoyas may have fallen short in the Big East tournament, they still look forward to another major tournament looming on the horizon. Their stellar season, in which they finished as the top team in the Big East conference and No. 14 in the nation, earned them an at-large bid in the NCAA tournament.

Wiese said that he was not worried about the result leading up to the tournament.

“I’m actually not too worried about where we are, how we’re playing,” Wiese said. “We have to move forward really quickly into a game this weekend in the NCAA tournament.”