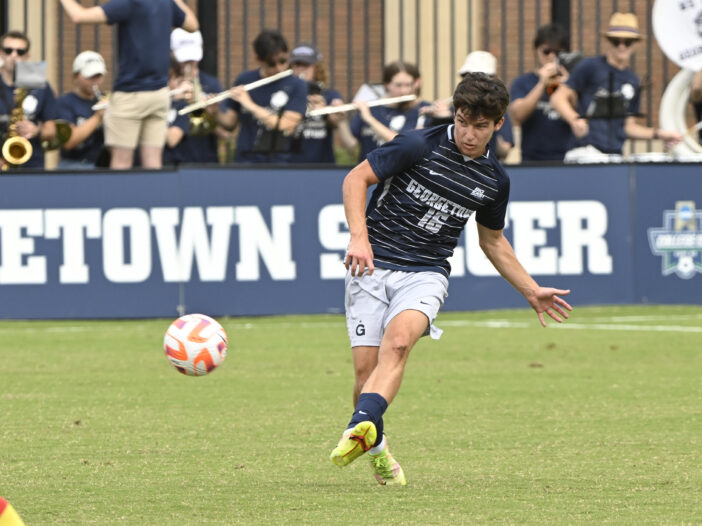 Georgetown men’s soccer lost 2-0 after conceding two second-half goals against James Madison University on Sept. 20. The Hoyas are now on a three-game losing streak and mired in one of the most disappointing starts in recent years.

The Georgetown men’s soccer team (1-4-2, 0-1 Big East) has been one of the top college programs in the country for the past several years, winning four out of the last five Big East Tournament Championships and the NCAA Division I National Championship in 2019.

Last season, the Hoyas finished 18-3-1, spent time ranked No. 1 in the country, won the Big East regular season and tournament titles and advanced to the national semifinals at the College Cup.

This year’s Georgetown squad came into the season with the pieces to compete nationally once again. They returned important starters from last season, including captains senior defender Aidan Rocha, senior defender Daniel Wu and graduate goalkeeper Ethan Koehler. Head Coach Brian Wiese, one of the top coaches in the country, continues to lead the team and brought in a top recruiting class, including first-year forward Jacob Murrell, the 2021-22 Gatorade Men’s Soccer Player of the Year.

The Hoyas’ lofty expectations were reflected in preseason rankings: they came in at No. 2 in the United Soccer Coaches poll and at No. 4 in the TopDrawerSoccer poll.

But when Georgetown opened its season Aug. 25 against the University of Pittsburgh Panthers, who were ranked No. 7 in the the United Soccer Coaches preseason poll, they conceded twice to lose 1-2.

Georgetown followed its first loss with a disappointing 1-1 draw against the unranked High Point University Panthers on Aug. 28 before earning a convincing 5-2 win over the Temple University Owls Sept. 2.

Since defeating Temple, though, the Hoyas have not won a game. They tied the then-No. 20 University of Denver Pioneers 1-1 and lost to then-No. 14 University of Maryland Terrapins 1-2. The season took a turn for the worse after the Maryland game, as Georgetown stumbled to two straight losses against unranked teams St. John’s and James Madison.

With Georgetown’s national ranking a distant memory, the question is now what has gone wrong and what the Hoyas must do to improve. There are a few key changes to the squad this year that come to mind.

First, Georgetown is a much more inexperienced team than they were a year ago. They lost five starters to professional contracts, including junior midfielder Dante Polvara who won the 2021 MAC Hermann Trophy for the best collegiate men’s soccer player in the country. Those players were comfortable competing against top teams — four of the five played for the national championship squad in 2019 — and that experience has been sorely missed this year.

Beyond actual game experience, the Hoyas are a very young team. They have multiple first-years playing significant minutes despite the serious adjustment from high school to college level play. There is a difference between playing against other 18-year-olds and trying to win headers against 25-year-old graduate students who are essentially grown men with over four years of college soccer experience.

Moreover, the Hoyas lost three of their top scorers from last season — Polvara, junior forward Stefan Stojanovic and senior midfielder/forward Zach Riviere. No player on this year’s team has yet shown the ability necessary to fill those roles and return the Hoyas to their former glory.

The situation isn’t all bad, however. If you look beyond the wins and losses, Georgetown has earned more corners in every game they’ve played and taken more shots than every opponent except for Pittsburgh. The way out for the Hoyas seems to be helping their young squad become more comfortable in big moments and finding a way to capitalize on opportunities from set pieces and shots.

Only time will tell if the Georgetown University Hoyas will be able to turn their season around and return to the familiar dominance of past teams. If they can find a way to implement these changes, they can get back on track.