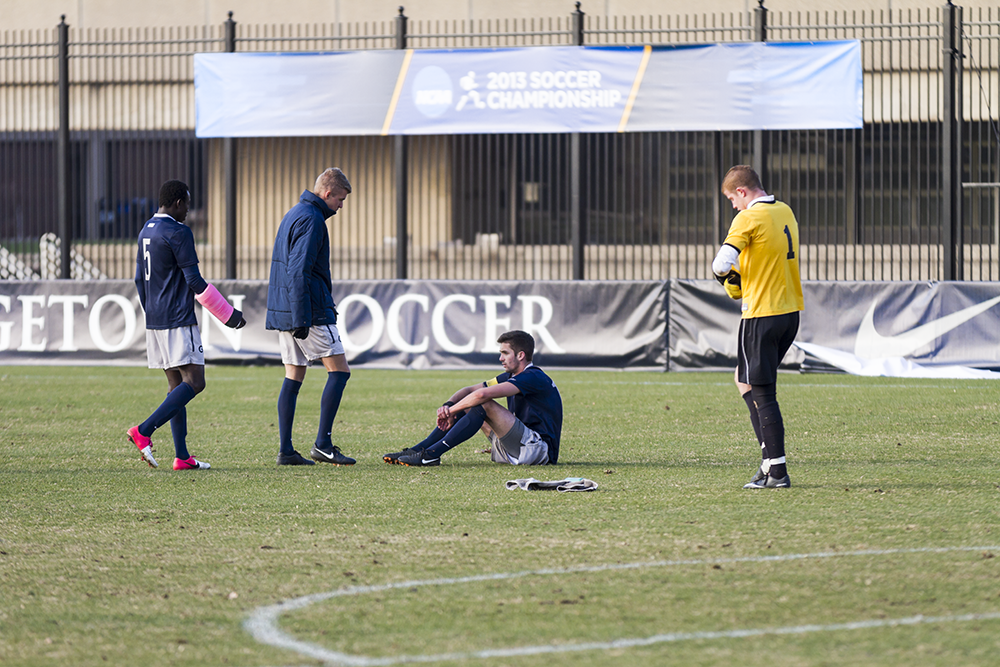 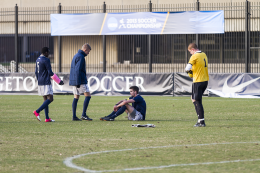 As the final seconds ticked off the clock on Shaw Field on Sunday afternoon, a stunned silence settled over the crowd. After 90 minutes of closely-contested chances, the Georgetown men’s soccer team (14-5-2, 6-2-1 Big East) watched No. 11 seed Michigan State stream onto the field to celebrate its 1-0 upset victory in the third round of the NCAA tournament.
“I’m sick for [the team] that this is it,” Head Coach Brian Wiese said after the game. “We were saying, you know, ‘Can we buy another week?’ But we just ran out of money.”
The sixth-seeded Hoyas controlled possession for much of the game and created several promising chances in the opening minutes. Sophomore forward Brandon Allen took a pair of shots early on, but Spartan sophomore goalkeeper Zach Bennett came up with two big stops to keep the Blue and Gray off the scoreboard.
“Brandon had a couple very, very good chances that he didn’t put into spots to beat the goalkeeper and, you know, that’s the difference,” Wiese said.
Despite a number of dangerous-looking balls from sophomore defender Keegan Rosenberry, the Hoyas couldn’t convert. It looked like only a matter of time before the Hoyas finally broke through, but the Spartans were the first to get on the board.
“It would’ve been great to get one in those first 10, 15 minutes,” senior forward and captain Steve Neumann said. “A team like that, the longer it stays 0-0, they get more and more confidence that they can counter and get a goal, and that’s exactly what they did.”
In the 28th minute, freshman defender Joshua Yaro cleared a shot in the box, but the ball fell square to the feet of Spartan junior forward Adam Montague, who launched a rocket from the top of the box for the 1-0 lead.
“Credit to the kid who scored. [Montague] put it in the upper 90, and Gomez didn’t really have a chance on that one. Credit him for jumping on that opportunity,” Neumann said.
Georgetown kept up the pressure for the remainder of the half, but the Michigan State backline held strong to keep the 1-0 lead.
The second half was more of the same for Georgetown, who struggled to beat Michigan State and finish chances.
“I think we knew it was going to be a hard team to break down … and that they were going to minimize the chances they conceded,” Wiese said. “Just a little bit more crispness, a little bit more patience in some spots, too. I think when we were in the attacking third it was almost too forced or a little too cute.”
As the clock wound down, the Hoyas stepped up the pressure, recording five of their eight second-half shots in the game’s final 12 minutes, but the Spartans’ defense could not be broken. The loss was only the fourth shutout recorded against Georgetown this year.
By the numbers, Georgetown was the better team, outshooting Michigan State 16-9 and taking six corner kicks to Spartan’s three. But in the end, only one number mattered.
For the team, the loss marked the end of the season, but for the six seniors, it was the last game of their college careers.
“It definitely hurts to go out of the tournament this early,” Neumann said postgame.
Of the seniors, Neumann and midfielder Joey Dillon, the Big East Midfielder of the Year, played nearly every minute of every game this season, and both are projected to continue their careers in the MLS, according to topdrawersoccer.com. Neumann is expected to be one of the draft’s top picks.
“You could argue he’s maybe the best player ever to play here,” Wiese said of Neumann, who was named Big East Offensive Player of the Year. “He’s a gifted player with the ball, [and] he sees things that other people don’t see. I’m obviously biased, but he’s going to have a very long professional career.”
Neumann acknowledged his plans to take his career to the next level, but with the loss still fresh in his mind, the future took a back seat to the past.
“Right now, this one really hurts, and I’m just kind of reminiscing on the years I’ve had here,” he said. 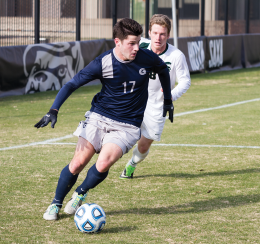