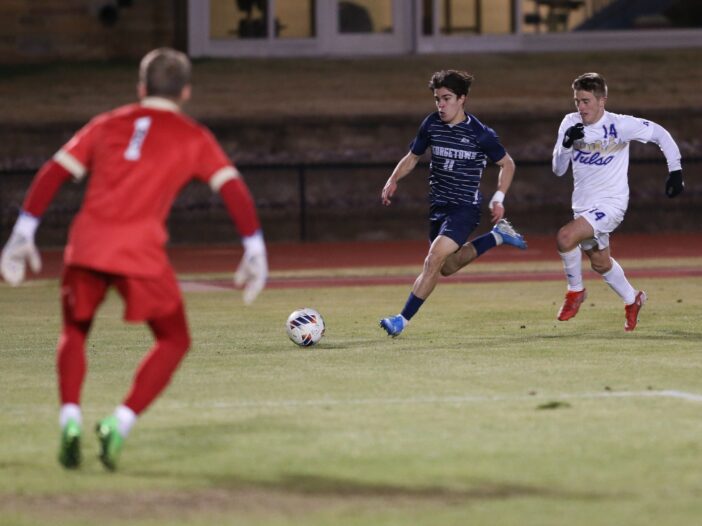 The Georgetown men’s soccer team showed some impressive resilience and growth this season. It turned around an early losing streak in remarkable fashion, but was unable to improve on its success from last season, falling to the University of Tulsa Hurricanes in the second round of the NCAA tournament.

On Nov. 20, the Hoyas (12-6-3, 8-1-1 Big East) fell 1-0 to the Hurricanes (10-5-2, 5-3-1 American Athletic Conference), capping off their tumultuous season. The Hoyas came into the year with high expectations, struggled to get their bearings over the first few weeks of the season, but finished with some impressive wins to earn the Big East regular season title and an at-large NCAA tournament bid.

The Hoyas entered the season ranked No. 2 nationally in the United Soccer Coaches poll after advancing to the national semifinals at the College Cup a year ago. They returned captains senior midfielder Aidan Rocha, senior defender Daniel Wu and graduate goalkeeper Ethan Koehler. Head Coach Brian Wiese, one of the top coaches in the country, also brought in a very strong recruiting class, including first-year forward Jacob Murrell, the 2021-22 Gatorade Men’s Soccer Player of the Year.

The pieces were there for the Hoyas to compete for the national title once again, so it was disappointing when they managed only a single win in their first seven games. After a 2-0 loss to James Madison University on Sept. 20, the Hoyas’ record had dropped to 1-4-2 with a tough Big East slate ahead.

Wiese saw this game as the worst of the Hoyas’ early struggles.

“That JMU loss was really the low point of the season,” Wiese said in a late-season interview with The Hoya.

At this critical juncture, Georgetown found a way to turn its season around. The senior leaders stepped up, the talented first-years found their groove and the Hoyas ripped off three straight wins against Creighton University, Bowling Green State University and Butler University.

After the James Madison loss, the Hoyas would not lose for another 11 games.

Rocha said the culture that Wiese has built for Georgetown men’s soccer kept the team energized and motivated even after a weak start to the season.

“When you’re being compassionate and personable and you really care about each other, it really quickly becomes a winning mentality,” Rocha told The Hoya.

Georgetown entered the Big East tournament as the top seed, squeaking by Butler University 2-1 in overtime Nov. 10 off of two emphatic goals from first-year midfielder Jack Panayotou to advance to the finals. In the Big East championship game, the Hoyas never quite got things rolling and were blanked 3-0 by Creighton.

The Hoyas’ efforts were enough to earn them an at-large bid to the NCAA tournament, though. In the first round, Georgetown met the Navy Midshipmen, champions of the Patriot League. After a scrappy first half, Murell stepped up, firing two second half goals past the Navy goalkeeper to send the Hoyas through to a second round matchup with Tulsa.

The Hoyas’ season ended in heartbreaking fashion at Tulsa. The two teams looked evenly matched over 90 minutes of regulation play, but a 93rd-minute goal from the Hurricanes ultimately proved to be the difference.

Despite the disappointing end to the season, many encouraging takeaways define this season. Murrell and Panayotou had breakout performances as first-years, tying for lead scorer with seven goals apiece. Junior goalkeeper Ryan Schewe earned the starting spot for the Hoyas early in the year and managed seven shutouts in 15 appearances.

The future looks incredibly bright for the Hoyas, as they will return nine of 11 starters from their second round matchup with Tulsa next season. They will also bring back their three leading goal scorers in Murrell, Panayotou and junior forward Marlon Tabora, their assist leader in Tabora and their starting goalkeeper, Schewe.

Georgetown will likely enter next year nationally ranked and will look to produce another outstanding season. With the success of Wiese and the men’s program as well as Head Coach Dave Nolan on the women’s side, Georgetown is without a doubt now a soccer school.