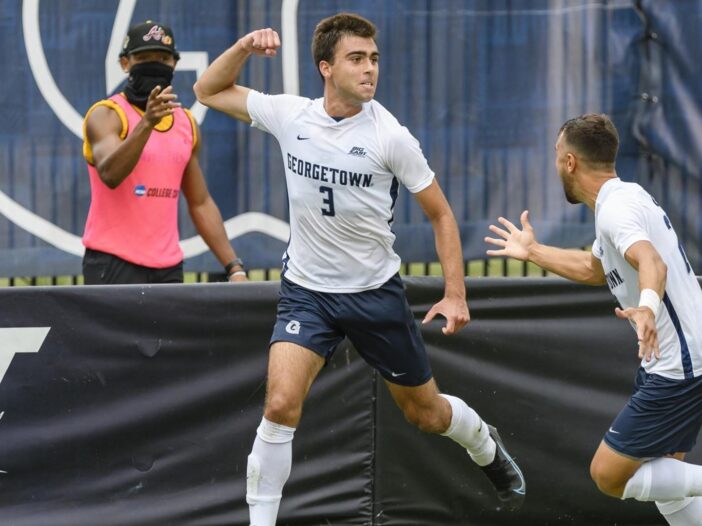 Georgetown men’s soccer continued its strong start to the season on Sunday, thrashing the Fordham Rams 4-0 in a display that saw much of the roster earn playing time. The Hoyas easily dispatched their first then-ranked opponent of the season, scoring all four goals in the first half of the game.

From the whistle, No. 2 Georgetown (2-0-0, 0-0-0 Big East) controlled possession as Fordham (0-2-0, 0-0-0 Atlantic 10) struggled to organize around the dynamic Hoya offense. Gaps in the Rams’ defense allowed junior forward Stefan Stojanovic, who joined the Hoyas as a transfer from Saint Louis University this summer, to find the back of the net in the 10th minute off a joint assist from sophomore midfielders Chris Hegardt and Kyle Linhares.

Junior midfielder Dante Polvara notched the next goal of the match, sinking a penalty kick awarded to the Hoyas in the 23rd minute. Polvara, who also recorded an assist on Georgetown’s fourth goal, was recently named to the Big East Weekly Honor Roll, as well as the 2021 MAC Hermann Trophy Watch List alongside senior goalkeeper Giannis Nikopolidis.

The Hoyas’ third goal came from the foot of first-year defender Kieran Sargeant in the 36th minute. Sophomore midfielder Marlon Tabora and senior defender and midfielder Joe DaLuz received credit for the assist. For his efforts on the other side of the pitch, Sargeant was named Big East Defensive Player of the Week.

To close out a dramatic first half, first-year forward Ronan Dillow capitalized on an assist from Tabora and Polvara in the 39th minute to score Georgetown’s fourth goal. The Rams showed signs of a threatening offense before the half but had no luck capitalizing with a goal.

The goals by Dillow, Sargeant and Stojanovic were each player’s first in a Georgetown uniform.

When asked about the transition of new players to the squad in postgame correspondence, Head Coach Brian Wiese noted the adaptability of the athletes, particularly the underclassmen.

“The entire freshman class has done a great job with integrating into college life and the team,” Wiese said in a statement to The Hoya. “It’s great to see young guys getting on the score sheet early.”

Throughout the second half of play, the Hoyas continued to maintain possession while rotating in several young players. Much to Fordham’s chagrin, Georgetown, despite not scoring after halftime, went on to outshoot the Rams 11-4 in the second half.

Wiese attributed his team’s attacking ability to a commitment to fitness.

“We had two games in a three-day period which is a really tight turnaround, and the fact that our performance was as sharp as it was against Fordham came from our fitness base,” Wiese said.

Next on the Hoyas’ agenda is a road trip to Syracuse this weekend. The Orange (1-1-0, 0-0-0 ACC) split their opening weekend, triumphing over Drexel before falling to Penn State 3-0. Wiese complimented Syracuse’s program, noting a challenging contest awaits Georgetown.

“Winning on the road is one of the hardest things you can do,” Wiese said. “I think the guys know this is a different kind of challenge than we’ve seen so far this year. We’re going to have to show up and be very good to get a result.”

Georgetown will next take the field on Friday, Sept. 3 at 7:00 p.m. EDT in an away game against Syracuse.