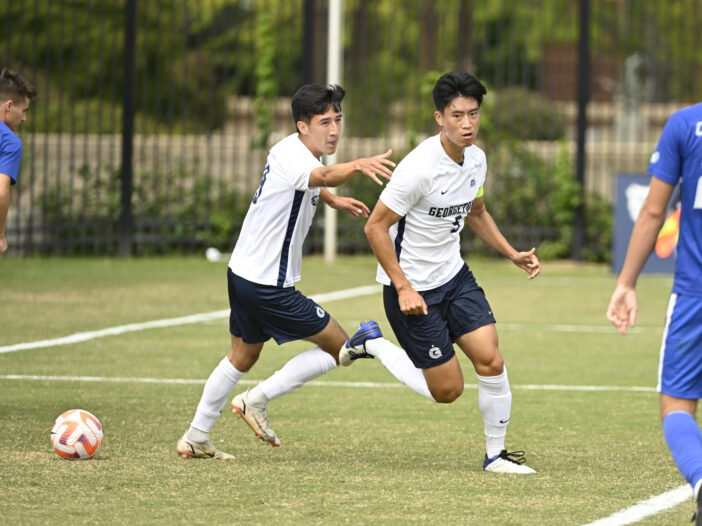 A strong defensive performance from Georgetown’s back four and junior goalkeeper Ryan Schewe secured Georgetown’s first shutout of the season and another win at home.

In a back-and-forth, rainy day match at Shaw Field, the Georgetown men’s soccer team (3-4-2, 1-1-0 Big East) clinched a 1-0 victory over the Bowling Green State University Falcons (2-4-3) in the final minutes of the Oct. 1 matchup. This victory was much needed as the Hoyas fight to remain on top after a rocky start to the season.

To begin the first half, Georgetown and Bowling Green played stifling high defensive presses, limiting overall attacking chances from either side. Junior forward Marlon Tabora made 2 shots in the 21st and 24th minutes, finally giving the Hoyas a chance to score. Yet, despite an accurate cross from Tabora that hit first-year forward Jacob Murrell almost perfectly in the box, Murrell slipped as the ball landed right in the goalkeeper’s gloves.

As the torrential rain continued to worsen throughout the half, Georgetown maintained crisp passing but could not fully capitalize on its attacks.

After a barrage of attacking runs and crosses during the first 45 minutes by Bowling Green captain and midfielder Kale Nichols, the Falcons finally had a clear-cut chance to take the lead right before halftime. However, Bowling Green forward Trace Terry’s volley clanked off the right post because of pressure from Georgetown’s back four, allowing the Hoyas to breathe a sigh of relief.

Both teams remained scoreless at the half.

For much of the second half, the flow of the game remained the same with neither team able to capitalize on its chances. In a counterattack after intercepting a sloppy pass from the Falcons, Murrell skillfully dribbled into the box and faked a shot before passing it off to first-year midfielder Jack Panayotou, who slotted the ball out of play. Georgetown had another opportunity to score, but sophomore midfielder Joe Buck’s shot from just outside the box landed in the keeper’s hands.

As the half progressed, Bowling Green began to institute an aggressive pressing scheme that the young, inexperienced Hoyas could not handle. Georgetown’s passing became inaccurate, and Bowling Green often intercepted or slotted passes out of bounds. The Falcons took advantage of the Hoyas’ mistakes, playing much of the second half on Georgetown’s side of the field. Despite the Falcons’ strength, the Hoyas managed to maintain an effective defense.

Finally — and seemingly out of nowhere — Georgetown regained composure with seven minutes to go.

Tabora, dribbling with his favored left foot, blasted the ball at the keeper, who was unable to gain control of it. With the ball deflecting off the goalie’s body, Panayotou received the rebound, shot and scored, putting Georgetown up 1-0 and increasing his season goal tally to 3.

With a Bowling Green free kick from outside the box sailing over the crossbar right before the final whistle, the Hoyas avoided a last-minute equalizer and secured their victory.

Tabora emphasized the reasons for the Hoyas getting this important team win.

“Bowling Green was definitely a quality opponent that posed a lot of danger during the game,” Tabora said in an interview with the Hoya. “As a team, we are always focused on trying to get the details right. By doing that, it allowed us to fight out a gritty win against a good team despite bad conditions.”

While the defense had an outstanding performance in preventing a quality Bowling Green side from scoring, Schewe achieved his first clean sheet of the season. Panayotou was able to increase his goal tally on the season to 3 off of a Tabora assist.

“I love seeing these guys play and carry on the great legacy of Georgetown soccer,” Iaropoli told The Hoya. “I’m looking forward to the rest of the home games and hope we can make it to the postseason.”