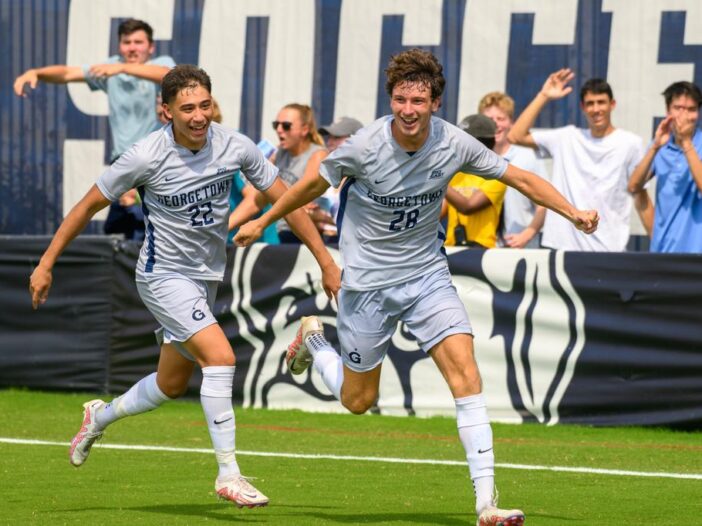 First-year forward Jacob Murrell put a header past the Panther goalkeeper for the first goal of his Hoya career. His efforts, however, were not enough to secure a win for the Georgetown men’s soccer team against the High Point Panthers on Aug. 28. The Hoyas struggled to capitalize on their opportunities at the net and drew 1-1.

The Hoyas (0-1-1) were clearly the better team from start to finish, but it was still a disappointing result for Georgetown at its home opener. On the heels of a tough 2-1 loss to the Pittsburgh Panthers (1-0-0) on Aug. 25, the Hoyas are still looking for their first win of the season.

Head Coach Brian Wiese highlighted some positives to be taken from the draw following the game.

“There’s a lot to be happy with,” Wiese told The Hoya. “We generated a ton of chances. The only disappointment is we left the game too tight.”

Georgetown came out attacking, slicing up the Panthers (1-0-1) in the midfield and trying to reach sophomore forward Ronan Dillow. In the fourth minute, junior midfielder John Franks sent a pass across to sophomore defender Kieran Sargeant, who hit a low, powerful shot that forced High Point goalkeeper Holden Trent to make a save. A few minutes later, junior midfielder Kyle Linhares blasted a set piece on goal from just inside the corner flag, challenging the Panthers once again.

The chances kept coming for the Hoyas as the half progressed. Franks had a look on goal after a series of passes and a deft flick from Dillow but wasn’t able to finish. Murrell came on in the 24th minute and had an immediate impact, hitting a shot on target and earning Georgetown a corner kick.

First-year midfielder Julian Barrios Cristales maneuvered through three defenders in the box, setting up fellow first-year midfielder Max Viera with a chance that was blocked by a High Point defender. The ball almost never left the Panthers’ half for the last twenty minutes of the period, but Georgetown went into halftime with nothing to show for its efforts, tied 0-0.

The Hoyas were always a step ahead in the first half but couldn’t manage a goal because of unpolished play in the final third of the field. They put together several strings of passes on the way to 12 first half shots but never managed to get particularly dangerous attempts on target.

The momentum briefly flipped in favor of High Point after the break when the Panthers nearly scored on a breakaway, seconds after the second half kickoff. Sophomore midfielder Joe Buck responded well, dispossessing a High Point attacker with a sliding tackle and hitting Linhares streaking towards the goal. His cross was dangerous but skidded through the penalty box untouched. The Hoyas got right back to challenging, and Dillow pounded a low ball into the post with a sliding effort.

In the 59th minute, Georgetown finally broke through. First-year midfielder Jack Panayotou hit an inswinging left-footed corner past the far post to senior defender Aidan Rocha, who gathered and floated a second cross into the box. Murrell headed the ball over the goal line to put Georgetown ahead 1-0.

The Hoyas’ celebration was short-lived, however, as the Panthers responded five minutes later with their only real chance of the day. A speedy counterattack down the wing and a curling shot that looped over the outstretched hand of Georgetown sophomore goalkeeper Luca Ulrich tied the game 1-1.

The Hoyas went back to dominating possession after the equalizer. Franks managed to stay onside and gather a well-placed through ball for an open break on net, but a High Point defender saved the game for the Panthers with a bold challenge from behind. Franks’ run would prove to be the best chance for a Georgetown winner, as the Hoyas didn’t manage any shots on goal for the last few minutes of the afternoon.

Georgetown will look for its first win of the season against the Temple University Owls (1-0-1) at Shaw Field on Sept. 2. The game will kick off at 4 p.m. and will be broadcasted on FloSports.