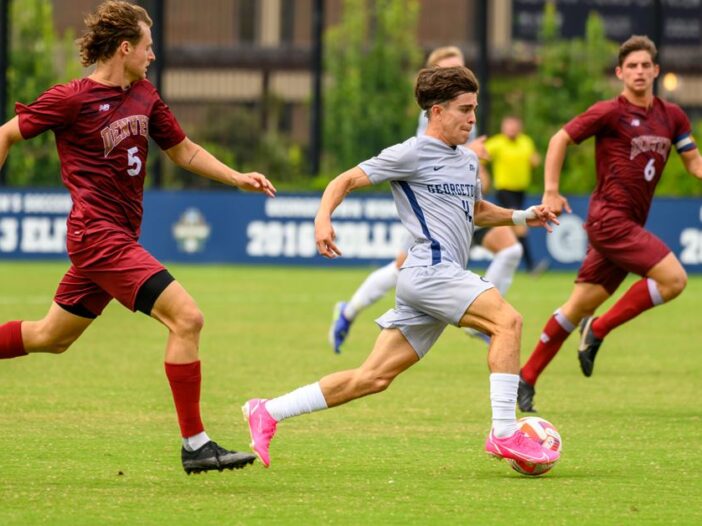 Junior forward Marlon Tabora blasted a highlight-reel goal from outside of the box to help the Georgetown University men’s soccer team earn a 1-1 draw against the University of Denver Pioneers on Sept. 5. Tabora’s 29th-minute strike was the fifth goal of his Georgetown career.

Head Coach Brian Wiese was proud of his team’s effort against the nationally-ranked Pioneers.

“We were creating against a team that’s really hard to create chances against,” Wiese said in a postgame interview with The Hoya. “I was really pleased with that.”

In the early minutes of the game, the teams jockeyed for control of the midfield and neither Georgetown nor Denver was able to earn much of an advantage. As the game progressed, the field opened up and the Hoyas put together a few chances to score. On a restart in the sixth minute, senior midfielder Aidan Rocha sent a quick pass to junior midfielder Kyle Linhares. Linhares then hit a low cross into the box for first-year forward Jacob Murrell, who missed just right. Murrell challenged again a few minutes later, this time heading the ball just over the crossbar.

Denver had its own scoring opportunity on a dangerous cross in the 21st minute, but their striker could not keep his header under the bar. Georgetown responded with another string of chances on goal, all of which failed to connect. The Pioneers blocked back-to-back shots from sophomore midfielder Joe Buck and junior midfielder John Franks.

In the 29th minute, Rocha dribbled down the right side of the field and gave the ball off to Tabora a few yards outside of the box. Tabora let the pass come across his body, took three dribbles to his left and fired a shot that clanged off the top left corner of the crossbar and into the goal to give Georgetown the 1-0 lead.

However, the Pioneers were resilient, as they earned a free kick in the Hoyas’ half in the 40th minute. A Denver forward floated a ball into the box that bounced up in front of the Georgetown goal and a Denver defender headed it past Georgetown’s graduate goalkeeper Ethan Koehler from point-blank range to tie the game. The two teams went into halftime tied.

Georgetown came close to starting the second half with a quick goal. First-year midfielder Jack Panayotou gathered the ball in the Pioneers’ box and had a great chance to settle and shoot but missed to the left. The game got a little chippy as the second half continued, and the Denver bench was given a yellow card for getting too vocal with the referee.

Wiese was impressed by the Hoyas’ resolve in focusing on the match and ignoring the external arguments.

Denver settled in by the middle of the second half and began to control possession around the halfway line and managed to work the ball down the sides of the field. They could not capitalize, however, because Georgetown center backs senior Daniel Wu and junior Kenny Nielsen cut off most of the Denver attacks before they could deliver any goals.

Wiese was happy with his defenders’ calmness against the Pioneers attack.

“Under the kind of pressure that Denver gives you, I thought we did a really good job managing that without conceding a lot of bad turnovers,” Wiese said.

Georgetown regained the momentum in the closing moments, and Linhares sent some well-placed crosses into the penalty area, but his teammates were unable to connect and the game ended in a 1-1 draw.

The Hoyas will look to improve on their efforts when they take on rival University of Maryland (1-1-1) at Shaw Field on Sept. 10. The game will kick off at 1 p.m.