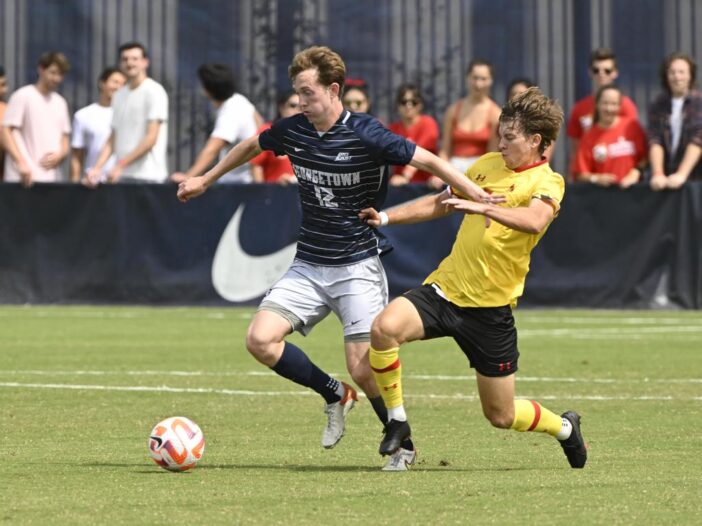 The Georgetown men’s soccer team couldn’t come back from an early deficit against the University of Maryland Terrapins on Sept. 10, falling 1-2. First-year midfielder Jack Panayotou scored Georgetown’s only goal with a left-footed shot from just inside the box.

The No. 21 Hoyas (1-2-2) came into Saturday’s matchup playing well but having won only one of their first three games. No. 14 Maryland arrived in Washington, D.C. fresh off a 6-1 drubbing of the University of Virginia on Sept. 5.

The two teams looked evenly matched for the first few minutes. Quickly, though, things started to fall apart for the Hoyas. In the 6th minute, a Terrapin striker beat sophomore midfielder Diego Letayf on the edge of the box then sprinted for the touchline. Letayf lunged in for the ball but took out the player’s legs, granting the Terrapins an early penalty kick. A Maryland midfielder stepped up, sent sophomore goalkeeper Luca Ulrich in the wrong direction, and calmly slotted the place kick into the bottom right corner of the net to put his team ahead 1-0.

From there, the chances kept coming for Maryland. The Terrapins looked quicker to the ball, rattling off 5 shots in the first 15 minutes. Still, Ulrich made some great saves to keep the Hoyas alive, and Georgetown managed to challenge on the other end with dangerous runs from junior Kyle Linhares and a close offsides call on Hoyas first-year forward Jacob Murrell.

Another Georgetown mistake in the 29th minute gave Maryland a second goal. Ulrich couldn’t control a difficult pass from sophomore midfielder Joe Buck and sent the ball straight into a charging Terrapin striker, who poked the ball into the open net to give Maryland a 2-0 lead.

Although the Hoyas managed some decent efforts in the last few minutes of the half, they went into the break down 0-2.

Head Coach Brian Wiese said he should have come in with a better game plan for his team.

“The first half was one of the more disappointing halves we’ve had,” Wiese said in a postgame interview with The Hoya. “It was a combination of Maryland being really good in that 45 minutes and me needing to rejigger a couple things.”

The Hoyas came out firing early in the second period. Junior forward Marlon Tabora led the way, blasting a shot over the goal before forcing the Maryland goalkeeper to make a save with a low driving effort.

In the 66th minute, Panayotou stepped into a long-range attempt from outside the box and the Maryland goalkeeper barely managed to poke the ball up off the crossbar. Two minutes later, first-year midfielder Zach Zengue dribbled into the penalty area and passed to Tabora. Tabora’s shot ricocheted off a Terrapin defender and fell to senior defender Aidan Rocha, who blasted a second effort from close range. The Maryland defender made a fantastic save to his right to knock away the shot, but it was clear that the Georgetown attack was back. With 14:41 to play, a deflected volley from first-year midfielder Julian Barrios Cristales fell to Zengue, but his shot was denied by another impressive save from the Terrapin goalkeeper.

The Hoyas finally broke through with 77:47 gone in the game. First-year forward Jacob Murrell found a streaking Panayotou right outside of the box and he launched a left-footed strike into the near corner to cut the Maryland lead to 2-1.

Wiese said he was proud of the way his squad performed in the second half.

“I thought the second half was great,” Wiese said. “We played some of our best soccer of the year in a lot of ways.”

Still, the effort would prove to be too little too late for the Hoyas. The ball rarely left the Maryland half for the last 10 minutes of the game as Georgetown tried shot after shot but nothing broke through. Eventually, the Hoyas fell 1-2.

Panayotou impressed once again after earning Big East Freshman of the Week honors for his goal and assist against Temple University on Sept. 2. He and the Hoyas will look to build on their late momentum when they take on the St. John’s University Red Storm (1-4-1) at 8:30 p.m. on Sept. 16.