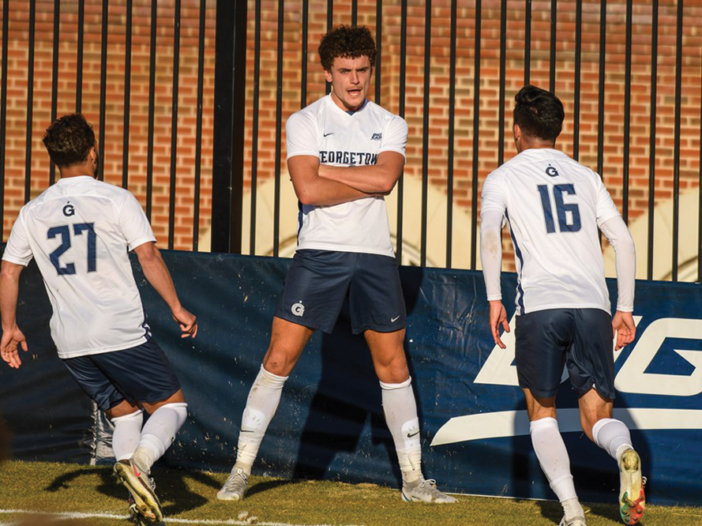 It was a sophomore show Feb. 27 as the Georgetown men’s soccer team dominated its season opener and downed the Villanova Wildcats 3-0. The No. 1 Hoyas recovered from a slow start at the beginning of the match to deliver a dynamic performance and triumph in their first contest of the 2021 season.

From kickoff, Georgetown (1-0-0, 1-0-0 Big East) maintained solid ball possession and easily outmaneuvered Villanova (0-3-0, 0-1-0 Big East) in the midfield. The Hoyas lacked a collective spark, however, and did not find the back of the net until the 43rd minute.

Despite a high level of organization from Villanova in the first half, first-year midfielder Chris Hegardt was able to sneak behind the Wildcats’ defense and connect with a pass from sophomore forward Will Sands to put Georgetown on the board.

Hegardt’s goal, the first of his Georgetown career, catalyzed a powerful second half for the Hoyas. Sands remained instrumental in moving the ball through the midfield while sophomore midfielders Aidan Rocha and Dante Polvara orchestrated a corner kick conversion to elevate the score to 2-0.

Polvara snagged his second goal of the match off a penalty kick in the 67th minute, adding a final brace for Georgetown and cementing a clean sheet for senior goalkeeper Ethan Koehler. Four of the Wildcats’ starting defenders picked up yellow cards in the loss.

Head Coach Brian Wiese praised the performance and potential of his sophomore players after the game.

“In the natural cycle, they’d almost be juniors. In some ways they’re old, but in some ways they’re still young,” Wiese said in a phone interview with The Hoya. “It’s a mix of them coming into their own and getting comfortable with new and bigger roles. They know they’re going to have to be leaders for the group. They let their playing do the talking for them.”

This win over Villanova will certainly help keep the Hoyas’ momentum going. However, Wiese was apt in noting his players still have plenty of room to grow.

“I think today we had a lot of opportunities where we got ourselves in good spots and we didn’t get a serve off at all or it didn’t connect where we were hoping,” said Wiese.

In the run-up to the next match, the statuses of senior forward Derek Dodson and senior midfielder Chris Le are uncertain, as both sustained minor training injuries and did not appear on Saturday. However, Wiese said he is optimistic both players could return to action this week.

Hoya fans may also expect an appearance from junior goalkeeper Giannis Nikopolidis who was named to the MAC Hermann Trophy Watch List along with senior midfielder Jacob Montes during the preseason.

Though the Hoyas will not return to Shaw Field until March 13 against St. John’s, Georgetown will certainly be excited at the opportunity to return to campus. Though fans are not permitted to attend at this time because of COVID-19 restrictions, Wiese has acknowledged the value the team places on playing at home.

“We rely very heavily on our home-field advantage, and no small part is our student base and fan base,” Wiese said. “It’s going to be a little funny without crowd support, but that’s part of this season and creating our own atmosphere.”

The Hoyas will next return to the pitch March 6 when they visit the Providence Friars for more Big East conference action.