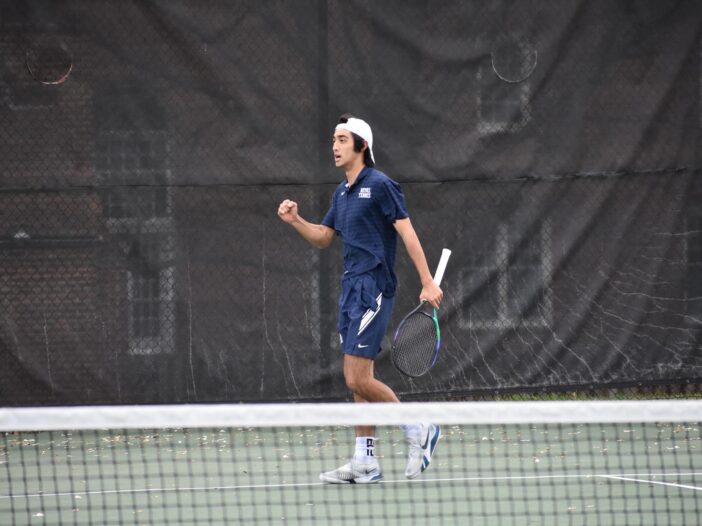 The Terriers (1-14, 0-1 Patriot League) were looking to take their second win of the season and the Hoyas (6-10, 1-2 Big East) looked to redeem themselves from a painful 4-3 loss to Butler in their third Big East match of the season.

Beginning with the doubles matches, Georgetown started off with a strong performance from first-year Jake Fellows and junior Kieran Foster for an impressive 6-1 win over Boston’s Johann Sajonz and Adrian Pawlowski.

Fellows, who is in the middle of a stellar first year on the Hilltop, commented how the athletes’ fierce mentality helped them earn wins in an interview with The Hoya.

“We just did well adapting to the conditions, keeping our heads down and focusing on the match and the players in front of us,” Fellows said.

Even with the losses, the Hoyas were still able to take momentum from doubles and convert it into four singles wins. Fellows was able to continue his winning streak in a nail-biting match, going 2-0 against Boston’s Loutas for the first win in singles.

Foster kept the energy high for the Hoyas in his 2-0 win against Terrier Jonah Dickson. Sharma lifted his personal singles record to 4-1 after he won his match against Pawlowski by dominating two sets 6-3, 6-3.

Finally, Bickel triumphed over Boston’s Gabe Brown 2-0. Georgetown’s Morgenstern and first-year Charlie Suh also made appearances in the singles matches but, unfortunately, the matches were called off early.

Morgenstern reflected on how the team’s perseverance throughout the day was reflective of the Hoyas’ toughness on the court.

“It was our first home match, and we came back from adversity with being down, plus the awful weather,” Morgenstern said. “It was very telling of how gritty we are.”

After the bout with Boston, the Hoyas took on the University of Pennsylvania (13-4, 0-0 Ivy League) on March 27 in Philadelphia. UPenn bested Georgetown 6-1, denying the Hoyas, with just three matches left, an opportunity to break even on the season.

Despite the loss to the Quakers, Fellows remains optimistic about the future for the men’s tennis team.

“Context is important. We’re a young team starting four freshmen. We’re learning how to play against the good teams,” Fellows said. “We have good recruits coming in next year, and so we clearly have an upward trend. I’m pretty positive about the next four years here.”

The Hoyas are in good shape for the rest of the season as they continue to hunt for their first Big East Championship since 1989.