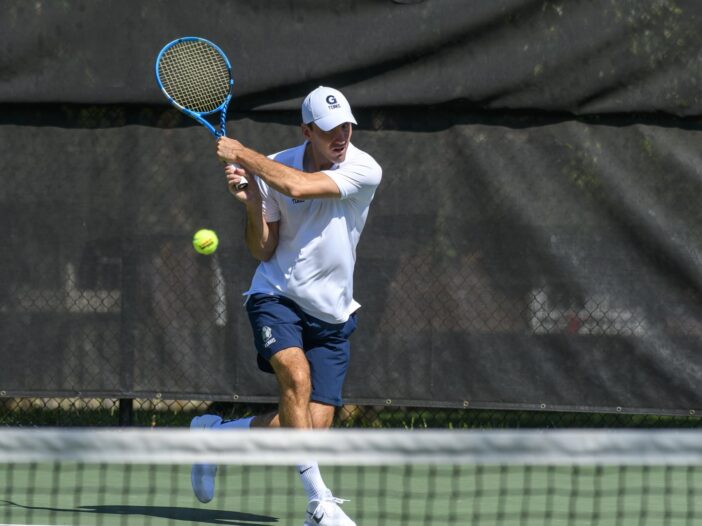 While many students celebrated the beginning of spring and St. Patrick’s Day last weekend, the Georgetown men’s tennis team traveled to Youngstown, Ohio to play a series of matches against the Youngstown State Penguins and the Butler Bulldogs.

The weekend started Friday afternoon with a match against Youngstown State. Georgetown won the doubles point by defeating Youngstown in two out of three matches. For the Hoyas, the combination of first-year Jake Fellows and junior Kieran Foster won 6-2, while the first-year duo of Akira Morgenstern and Adhvyte Sharma won 6-4.

Head Coach Freddy Mesmer praised the team for their performance in doubles over the weekend during an interview with The Hoya. He emphasized that success in doubles matches will be critical for the team moving forward into the final stretch of the season.

“Doubles has been a big focus and we were able to execute well over this past weekend,” Mesmer said. “I am hoping we can continue our doubles success and try to roll that momentum into the Big East tournament.”

With momentum from the team’s top two players, the remainder of the Hoya team battled hard. While Youngstown secured close victories in the No. 3 and No. 5 matches, No. 4 graduate Scott Bickel dominated his competition 6-3, 6-2.

In the final and most exhilarating singles match of the afternoon, sophomore Derek Raskopf won the third set tie-breaker over Youngstown’s Will Everett 10-6, securing the 5-2 victory for Georgetown.

With the March 18 victory, the Hoyas had a quick turnaround to go up against a stronger opponent in conference foe Butler (7-7, 1-1 Big East) the next day. The Bulldogs came into the clash well rested, having not competed in six days. The morning meeting proved to be a gritty Big East grudge match.

The Hoyas continued their dominance in the doubles matchups, with both Fellows/Foster and Morgenstern/Sharma defeating their Butler opponents 6-4.

Georgetown’s third doubles team of Bickel and Raskopf were leading 5-4, but their match was called short when first and second doubles secured the doubles point.

The singles battles proved to be equally competitive. While Foster fell 6-4, 7-6(8) in the No. 1 matchup to Butler’s Thomas Brennan, Fellows overcame the Bulldogs’ Michael Dickinson after dropping the first set, winning 2-6, 7-5, 7-5 in a resilient comeback effort.

The No. 3 and No. 4 singles matchups were also split between Georgetown and Butler. Whereas the Bulldogs’ No. 3 Alvaro Huete Vadillo defeated Sharma 6-4, 6-2, Bickel continued his strong play, winning 6-3, 7-5 in an undefeated weekend.

With the singles contest tied 2-2 and Georgetown leading the overall match 3-2, the No. 5 and No. 6 matches grew tremendously important for the overall outcome of the series. The Hoyas were in a position to secure the team victory with just one more win.

However, the Bulldogs rose to the occasion, sweeping the matchups 7-6(5), 6-3 and 6-0, 6-2, respectively. With these two victories, Butler secured a 4-3 team victory while the Hoyas let one slip through their fingers.

Despite a grueling second match, Coach Mesmer was proud of the team’s overall fitness levels, which allowed them to keep up with strong competitors.

“It’s tough going back-to-back, but our team’s fitness has been a top priority this year, and we are used to these longer matches and back-to-backs,” Mesmer said. “Our fitness level has shown against these other teams.”

Looking ahead, the Hoyas will be back in action in another back-to-back series. Georgetown will take on Boston University (1-12) at home March 26 before traveling to Philadelphia to compete against the University of Pennsylvania (12-4) the next day.