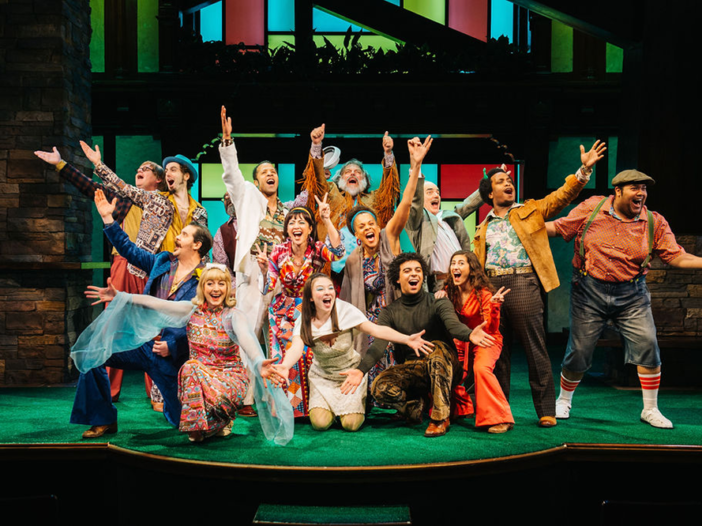 Director Aaron Posner’s modern rendition of William Shakespeare’s “The Merry Wives of Windsor” is a crowd-pleasing comedy with just as much relevance to modern audiences as to 16th-century ones. Even those uninterested in Shakespeare will enjoy this humorous — and occasionally musical — performance, if only because it is set in 1970s England and features hilariously archetypical hippie costumes.

Featuring two women in the main roles, “Merry Wives” at the Folger Theatre is a playful and entertaining commentary on female political and domestic power that has less to do with love and more to do with gender relations, appropriate both to Shakespeare’s time and this rendition’s era of women’s liberation.

In “Merry Wives,” Sir Falstaff (Brian Mani) — referred to as Falstaff — is fully developed into a grossly obese, repulsive man with eyes for two married women, Mistress Page (Regina Aquino) and Mistress Ford (Ami Brabson). His interest is largely driven by his desire to take their husbands’ wealth. When the women discover Falstaff’s plans, they conspire to make a fool of him. What ensues is a hilarious demonstration of just how far they will go to uphold their honor and unhinge their pursuer, exemplifying women’s independence and cleverness as they seek revenge.

The husbands play a lesser, albeit still important role upon learning of Falstaff’s intentions. Mr. Page (Tyee Tilghman) does not doubt his spouse’s loyalty, but Mr. Ford (Eric Hissom) is consumed by jealousy. At the same time, a subplot follows the love life of Page’s daughter, Anne (Linda Bard), who has enraptured three different men. These threads ensure a fast-paced play that ties everything into a neat bow by the final act.

Despite the risks of recontextualizing 16th-century references, this 1970s rendition is ideal for placing the characters in the era of second wave feminism, a time rife with political debate and misbehaving men. As a result, Shakespeare’s strong female leads standing up to the egotistical Falstaff fits right in with the 20th century. Setting the play in more modern times makes it appealing to a wider range of people, some of whom may not otherwise have been interested in watching 16th-century material. Posner’s reimaging is both exceptionally creative as well as relevant to modern audiences, drawing on more salient historical and political references than the original.

The impressive acting in “Merry Wives” gives depth and timelessness to the comical and contentious relations between characters, bringing to light the disparities in gender relations and the underestimation of women. Mani’s interpretation of the wide-waisted Falstaff is refreshingly energetic and well executed. Mani is joined in the spotlight by Aquino as Mistress Page and Brabson as Mistress Ford, both talented actresses. Mr. Ford is very successfully brought to life by Hissom, a seasoned Shakespeare actor. Equally impressive is Tilghman as Page. He is better known for his work in film and television, although the theater seems to agree with him as well. Kate Eastwood Norris makes a hilarious Mistress Quickly and Cody Nickell is brilliantly charismatic as Dr. Caius.

Given the play’s emphasis on female autonomy and wit, it is disappointing and ironic that the performances of some of the actresses do not stand out as compared to their male counterparts. Aquino and Brabson make their marks, but Bard and Danielle Gallo, who played Pistol, fall short of expectations. Neither seem to have the dramatic gusto or emphatic body language of some of their male colleagues. Dante Robert Rossi as Fenton and Derrick Truby as Simple are truly excellent actors who outshine the women they play opposite.

Even so, an overall exceptionally talented cast and amusing plotline make this a play worth watching. The wittiness and snide references to 1970s culture will evoke laughs even from those who dislike classroom Shakespeare.