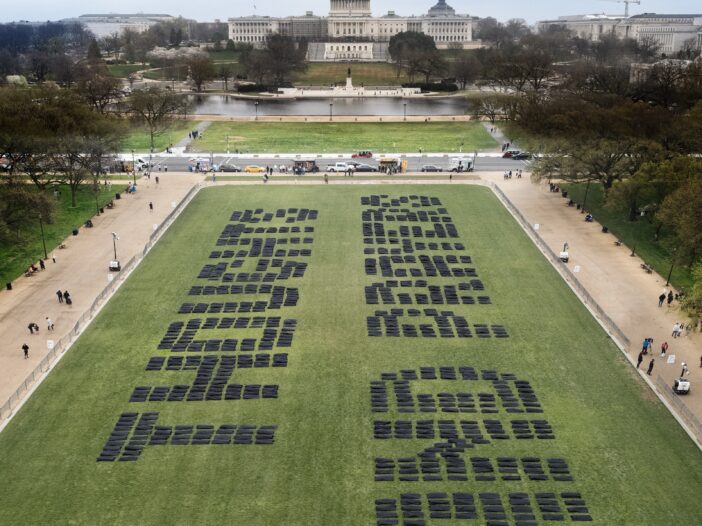 Over 1,100 body bags stuffed with inflatable balloons spelling out “Thoughts and Prayers” appeared on the National Mall in front of the United States Capitol building on March 24.

The display, organized by March for Our Lives (MFOL), a student-led gun violence prevention advocacy group, aimed to honor the victims of gun violence four years after protests broke out when a gunman killed 17 individuals at Marjory Stoneman Douglas High School in Parkland, Fla. Each body bag represented more than 150 deaths from gun violence since the Parkland shooting, as gun violence has killed over 170,000 people in the U.S. since then.

MFOL organizers arranged the body bags to spell out “Thoughts and Prayers” to reference the mantra often cited by officials after mass tragedies. Gun control advocates frequently criticize the phrase, arguing that offering thoughts and prayers in place of preventative action is insufficient.

Display organizers also started a petition urging the U.S. Senate to bring legislation regarding universal background checks to a vote.

“There’s nothing that is more visually striking than a body bag,” Kane told The Hoya. “Obviously, it’s something that makes us viscerally react, it makes us think of death. And so seeing ‘Thoughts and Prayers’ portrayed in that way, I think was something that really grabbed me and made me catch my breath.”

While the installation was only up for a few hours, images quickly circulated on social media to draw attention to MFOL’s demands and petition.

Georgetown’s MFOL chapter tabled in Leavey Center with a QR code linking to the petition to encourage support and signatures, Kane said.

While graphic, the display was necessary to draw attention to MFOL’s cause, according to Melissa Altschiller, a movement organizer for MFOL in Washington, D.C.

“You think about it deeper as a movement organizer and someone who needs to catch the attention of politicians,” Altschiller said. “And you’re like, ‘Wait, this is exactly what we need to be doing. This is what will grab the headlines.’ We’ve been out there with banners and flyers for the past three years and nothing has really stuck.”

The installation’s location in front of the U.S. Capitol building aimed to remind politicians of their inaction and push them toward legislative solutions that will prevent future instances of gun violence.

Kane said she hopes the installation and petition lead to long-awaited change from politicians to prevent gun violence in the future.

“I hope they just realize that not taking a stance on gun violence has consequences,” Kane said. “We need concrete action steps, like passing universal background checks, to actually stop people from dying. I hope people realize that a politician saying ‘thoughts and prayers’ doesn’t actually do anything, and we can’t let that stand instead of actual action.”

The installation serves as an important call to action, Altschiller said.

“I wish that people still cared about the movement as much as we did, because the movement feels like it’s dying out because there hasn’t been a mass shooting in a while,” Altschiller said. “But there’s been over 70,000 people who have died since Biden even took office, so I just think that it’s important for people to be uplifted again and wanting to help and wanting to call their politicians and to make change.”