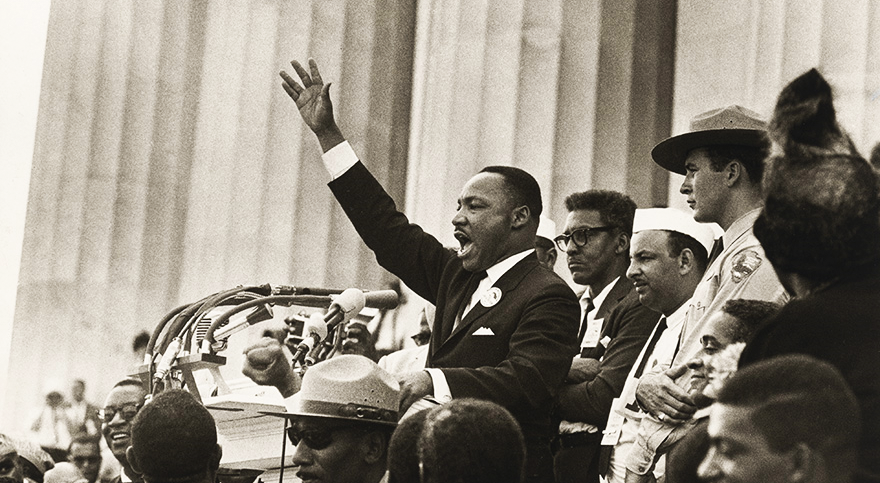 A series of black and white photographs capturing some of the nation’s most pivotal historical moments have been congregated in one exhibit of the National Portrait Gallery. “In Mid-Sentence” cleverly explores how words shape a nation’s political, racial and cultural climate by displaying photos that capture political icons and important thinkers in the physical act of speaking.

The Portrait Gallery is best known for housing paintings of each U.S. president, and while “In Mid-Sentence” does feature several presidents in its catalog, other subjects including activists and community leaders demonstrate how photographs of people can illuminate a tale of the country’s history and culture.

Though the exhibit space is barely more than a long closet with vaulted ceilings, the well-chosen photographs distract from any sense of claustrophobia. Each image is accompanied by an informative placard detailing the context in which it was taken, along with information on the subject. The deep blue walls are dominated by famous, powerful American icons such as Angela Davis and Lyndon B. Johnson whose parted lips are caught in the middle of giving culture-changing speeches. More often than not, their words were caught by photojournalists or members of the press rather than professional artists. The emphasis therefore falls more on each photo’s historical significance rather than artistic prowess.

Even so, these photographs are anything but unprofessional and showcase the highlights of photojournalism during the tumultuous years of the second half of the 20th century. Sharp lines and stark contrasts in lighting dominate the scenes, and the lack of color in each photo only makes these features more prominent. The few shaky images seem intentionally out of focus, as if the photographer intended to encapsulate dualities; it is an exhibit highlighting photojournalism, but the best photos manage to blur the line between art and history through their composition, framing and impeccable timing.

One example of historical moments being rendered artfully in the exhibit is Garry Winogrand’s image of President  John F. Kennedy during his acceptance of the Democratic Party’s presidential nomination in 1960. Harsh spotlights diffuse the atmosphere, giving the entire image a sense of surrealism. Light bounces off Kennedy’s face to create an ethereal halo, alluding to his status as an American icon at the time of nomination and his further beatification that would occur after his assassination.

Rather than seeing Kennedy head-on, the viewer gazes simultaneously at the candidate’s back in real life and at his face broadcast on a small television. The effect suggests looking towards the future and the past, both of which Kennedy spoke to during his acceptance speech. This photograph, like many of its neighbors, merits appreciation for both its aesthetic value and its historicity.

The Kennedy print stands alone at one end of the gallery, but the other photos fit under one of four categories: “Public/Private,” “Just Between Us,” “Teaching and Learning” and “In the Public Eye.”  Such groupings can serve as helpful framing devices, but, in this case, there is too much overlap to make them effective. For example, “Private” or “Just Between Us” classifications are undermined by the photographer’s invisible presence. An image of Martin Luther King Jr. taken by Robert Adelman on the steps of the Lincoln Memorial during his “I Have a Dream” speech is technically categorized as “In the Public Eye.”

Yet the moment could easily be classified as a teaching moment for America in which formerly private conversations on integration and civil rights became public on some of the most symbolically hallowed steps in the country. King’s stance and posture in the center of the photograph along with his outstretched arm direct each viewer’s eye towards him; his open mouth suggests his passionate voice, even within the paradoxical bounds of a still photograph. The exhibit’s titles attempt to frame the photographs in a helpful manner, but they could just as easily and more effectively be taken together in a holistic view of an America in flux.

Despite these unclear categories, the small exhibit is gratifyingly manageable; strolling through the exhibit leaves enough impact to be memorable but does not inundate you with artifacts so as to become overwhelming on a casual visit. Visitors will be treated to up-close encounters with some of the United States’ most iconic photographs that have defined the 20th century and the broadening of the public sphere that came with it.

“In Mid-Sentence,” on view until March 8, 2020, is a captivating testament to the power of public and private speech in U. S. history. Its high-quality images have clearly been chosen with care, and even though the exhibit is small, each photo echoes the powerful words that its subjects once boomed into microphones or whispered to the person next to them.