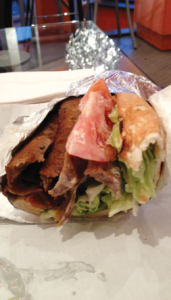 There is nothing quite like the shared looks of anticipation among friends that quickly turn to deep satisfaction or the mumbled attempts at describing the pleasure of great food.Mourayo allowed me this rare and distinct experience. The table quickly descended into silence as meals were laid before eager diners. We had been relatively social through the appetizers, but our conversation proved no match for the entrees.

The steak, a perfect medium rare with just a dash of wine and truffle essence sauce with porcini mushroom garnish, was an unqualified delight. The potato puree and blend of traditional Greek vegetables were of almost equal quality.

The desserts were as divine as the ancient figures who the restaurant claimed as inspiration —  Eros had an unassuming description (yogurt, strawberries and thyme honey in a phyllo nest) but turned out to be a pleasantly light complement to the heavy entrees.

This restaurant — with courteous staff in tow — deserves better than the slightly disconcerting “Grill Kabob” sign outside of it. RedFire Grill Kabob, like the food it serves, is surprisingly satisfying. I ordered a gyro and two samosas.

For those who’ve missed the samosas at the fall farmers market, I would advise heading down to this place now. Packed full of flavor and served piping hot, these samosas are the real deal. My gyro didn’t disappoint either; full of fresh ingredients and well wrapped, it makes for an easy lunch. Anyone looking for a new lunch spot should not be fooled by the sign and give RedFire Grill Kabob a try — it won’t disappoint.