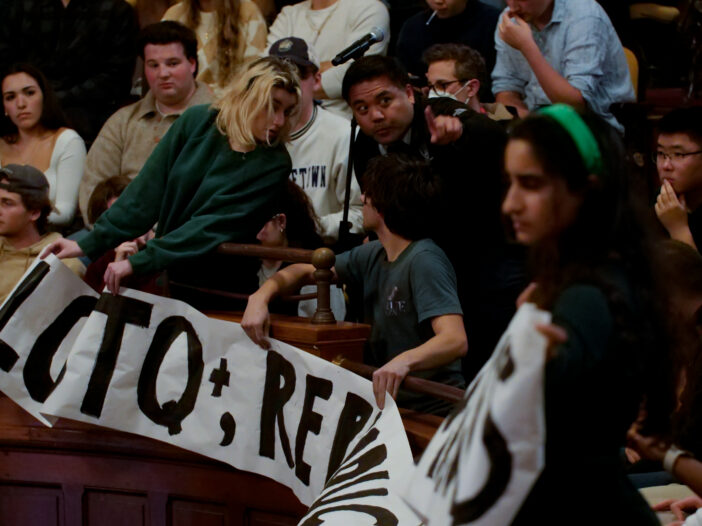 Former Vice President Mike Pence took center stage to discuss the Biden-Harris administration’s performance, the role of youth in politics and the upcoming midterm elections amid a student walkout and protest at an event in Gaston Hall.

A few days after GU Politics announced the event, students organized a meeting Oct. 15 to discuss ways to protest Pence’s visit. Led by Sanchi Rohira (SFS ’24) and Carrie McDonald (COL ’24), the group decided to organize a walkout in the middle of Pence’s speech and a subsequent protest outside of Healy Hall.

Full Disclosure: Rohira previously served as a staff writer, while McDonald currently serves as Deputy Sports Editor for The Hoya.

At the event, Pence praised Generation Z and said the students in the audience should work to uphold the foundations of freedom in the United States outlined in the Constitution.

“The truth is, what we need is a debate and a government as good as our people,” Pence said at the event. “I am confident that we will soon, and very soon, because I have confidence in your generation. I know you’ll be the ones to stand on the ramparts of freedom, you’ll be the ones who stand proudly on the legacy of liberty enshrined in our founding documents.”

Rohira said she and other protesters were angered by the university’s decision to invite Pence to speak because of his outspoken opposition to various identity groups, namely LGBTQ+ people.

“Our problem was that they invited someone who fundamentally believed that so many Georgetown students have invalid identities and therefore should not exist,” Rohira told The Hoya.

On his 2000 congressional campaign website, Pence signaled his support for conversion therapy, a debunked form of therapy that aims to change a person’s sexual orientation or gender identity. Various medical organizations such as the American Medical Association (AMA) and the American Psychological Association (APA) have rejected the practice for its harmful effects on mental and physical health.

Marc Lotter, a spokesperson for Pence, told The New York Times in 2016 that the former vice president never supported the practice.

Rohira gave the cue for the walkout — two successive claps — about 10 minutes into the event, after which Pence began speaking on the existence of a “woke” agenda that threatens American freedoms. Approximately 50 students stood up and walked out of the room, waving pride flags as students participating in the demonstration unfurled a banner reading “LGBTQ+, Reproductive Rights Are Human Rights” across the second-floor balcony.

As students made their exit, Pence quipped about the walkout in his speech, which was met with applause from a number of audience members.

“It seems to me that leaders in this nation’s capital have never been more out of touch or more intent on imposing their agenda or walking out on people who might have a different point of view,” Pence said.

Mike Pence did not respond to The Hoya’s request for comment in time for publication.

Students participating in the walkout handed out over 800 flyers detailing Pence’s policies that have harmed LGBTQ+ people, BIPOC people and other marginalized communities, such as his support for anti-abortion bills and legislation that attacks LGBTQ+ rights, to remind attendees of Pence’s history, according to Rohira.

“We anticipated that he would use this event to try to sanitize his image and escape his record, which is exactly what he did,” Rohira said.

After walking out of the event, protestors gathered on the steps of Healy Hall, holding signs, banners and LGBTQ+ pride flags. While on the steps, the protestors chanted messages like “hate has no home” and “this is what America looks like,” while Georgetown community members walked past, many of whom stopped to watch the protests.

Kayla Barnes (SFS ’26), who attended the event and participated in the walkout, said she wanted to respectfully protest Pence’s speech.

“I went to the scheming session, and I decided to participate because I felt like this was the best way to make people see my feelings on this issue,” Barnes told The Hoya. “Based on the previous administration’s actions, I just don’t feel like I can support this man at all.”

Other students like Meghan Shah (NHS ’26) do not support Pence, but chose not to participate in the walkout in order to listen to what he had to say at the event.

“I personally am not doing it because I just want to hear what he has to say,” Shah told The Hoya. “He’s not exactly someone I agree with at all, but the topic of the talk — the future of conservatism — is interesting. I want to know how he’s gonna present that, just because they’re such controversial opinions.”

Elleithee, who has spent over two decades working in the Democratic Party as a communications strategist for the Democratic National Committee and several elected officials, said he thinks it is necessary to engage with conservatives like Pence to create the open dialogue that drives democracy.

“One of the biggest challenges facing our democracy today is hyperpolarization,” Elleithee said at the event. “​​We want to put people from different perspectives together to have the hard conversations, sometimes to find common ground and oftentimes not, but to see if we can at least find common motivation.”

Rohira said she and other protesters hope to continue the momentum from the walkout by crafting a statement with demands for the university, from hiring an assistant director for the LGBTQ Resource Center and better funding for Counseling and Psychiatric Service (CAPS).

“In order to channel all the momentum that we gathered last night into tangible change for the queer community on this campus, in the next day or two, we will be sending an official statement to the university with a bunch of actionable rules that they can follow in order to attempt to make up for the damage that they did to our community last night,” Rohira told The Hoya. “The statement is basically going to say, ‘Hey, who messed up last night by making us feel unsafe?’”