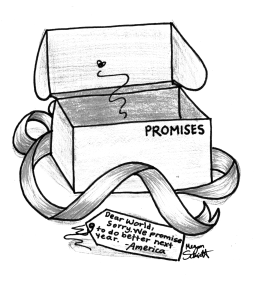 When Barack Obama entered the 2008 presidential race, Americans had lost faith in their government’s ability to reflect the ideals that had made the nation strong for over two centuries. Nowhere was this more evident than in the way the government conducted itself in its War on Terror. Slowly but surely, we saw our civil liberties shot down at the same time that our country’s leaders began to ignore international treaties regarding human rights. We looked on in disgust as the sordid details of the prison at Guantanamo Bay were brought forward. In our national consciousness, we knew that the Bush administration’s use of the term “enhanced interrogation techniques” covered up a far darker truth regarding its means of obtaining intelligence. The election of President Obama, therefore, seemed to herald a significant moment in the history of our country’s approach to international relations. In Obama, we saw the answer to the problems of the Bush years. Here was a man unafraid to stand up to the conventions of the bureaucracies and industries that pulled the strings behind our overseas conflicts.

Four years and one Nobel Peace Prize later, President Obama has significantly altered his positions on national security. Nowhere is this more evident than in the president’s willingness to expand our predator drone program. Details released in a recent Department of Justice memo shed more light on the administration’s legal justifications for its use of drones to kill Americans living abroad who could be linked with terrorists. According to the memo, high-ranking officials hold the power to order a drone strike on any overseas target deemed to be an “imminent threat” to U.S. security. The wording is vague, and the idea of an imminent threat carries little legal weight. All the president and his closest national security advisers must do before they can assassinate an individual is agree that their target is a member of a terrorist organization.

Campaign promises are practically made to be broken, and we are naive to place faith in words alone. To give credit where it is due, President Obama has done his best to work toward fulfilling many of his most politically volatile promises.

It is also important to remember that, when Obama took office in 2009, the United States was faced with the harsh economic reality of the times. Obama was thus forced to drastically change the tone and focus of his presidency. Likewise, we as a nation switched our focus from foreign matters to domestic policy. Perhaps we trusted that the formerly objectionable practices of the Bush administration had at last been abandoned simply because Obama was now in office.

Last year, the final presidential debate, which focused exclusively on foreign policy, drew the lowest number of viewers out of the three televised debates. Only 5 percent of respondents count foreign policy as the most pressing issue facing the United States in the years to come.

There are few presidents remembered first and foremost for their accomplishments overseas. Nixon opened up China. Reagan ended the Cold War. Barack Obama could be remembered as the president who ended the War on Terror, but history could tell a different story.

Barack Obama could also go down as the president who accepted a dubious legal justification for drone strikes against American citizens. While most Americans can find some semblance of reason in the use of drones to kill terrorists, the principles revealed in the Department of Justice memo set a frightening precedent for any future expansion of the drone program. Drone strikes remain wildly inefficient. While no definitive study has been released, estimates suggest that for every one terrorist assassinated by a drone, between 10 and 50 civilians are killed. These people cannot become mere statistics or collateral damage. In a 2008 interview shortly after his election, President Obama said that he was committed to reforming our war and intelligence tactics as part of “an effort to regain America’s moral stature in the world.” It is time for him to truly live up to the promise of his words.

Matthew Grisier is a freshman in the College.