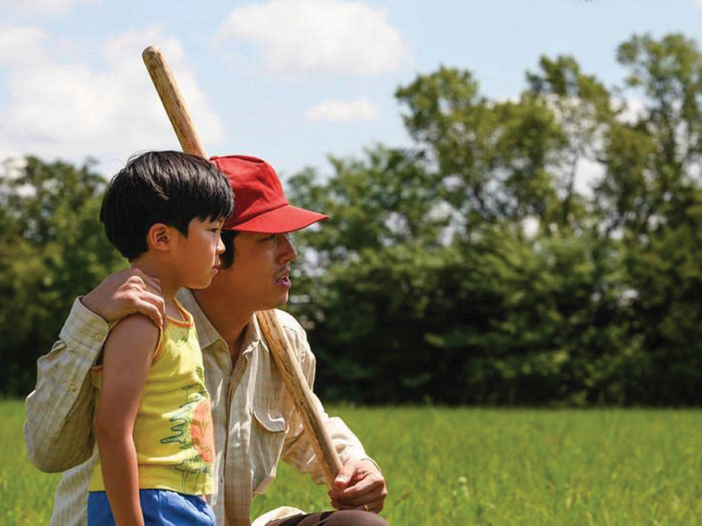 The little girl asks her father, “Why don’t we grow American vegetables?” “We grow Korean vegetables for all the new immigrants who miss the taste of home,” he responds.

Just like the vegetables on the Yi family farm, the film “Minari” does not seek to make Asian America palatable to white America. Instead, “Minari” tells the intimate story of one family’s journey, capturing the subtlety of the Asian American experience while simultaneously tracking the Yis’ pursuit of the quintessential American dream.

“Minari,” a semi-autobiographical film written and directed by Lee Isaac Chung, follows the Yi family as the patriarch Jacob (Steven Yeun) uproots his family from California to start a farm in Arkansas. Monica (Ye-ri Han) resents her husband’s decision, especially when she finds their new house rests on wheels and could literally be blown away by a tornado.

Instead of returning to California as Monica wanted, the Yis compromise and decide to bring grandma Soonja (Yuh-Jung Yoon) over from Korea. What ensues is a story of frustration, joy and love as this family puts down new roots.

Like any other Asian immigrant story, “Minari” would not be complete without acknowledging the racism the characters face. However, the film’s portrayal of racism subverts mainstream expectations. Chung is not trying to explain his story to white people; we do not see the characters desperately flaunting their pain, as if to say, “Look at my wounds and how good a person I am. I do not deserve this, so racism is bad.”

When the Yi family goes to church in Arkansas for the first time, they are asked to stand and be recognized as newcomers. The room falls silent, as though at any moment someone might go off on a racist tirade. No one does; it is only at the lunch after the service that the children face racism. David (Alan S. Kim) is questioned by another little boy as to why his face is so flat, to which he simply replies, “It’s not.” A girl walks up to Anne (Noel Kate Cho) and starts reciting gibberish, telling Anne to stop her when she says something in “her language,” and Anne obliges.

Chung’s choice to use children to portray the only overtly racist incidents in the movie shows a dimension of the immigrant experience that is rarely — if ever — portrayed in mainstream stories of immigration. The white children ask questions more out of curiosity than malice, and the Yi children don’t seem to experience these microaggressions as such. The white childrens’ comments are undoubtedly racist, but the children themselves are not hateful or vile. These scenes, while uncomfortable, introduce necessary nuance into our discussions of race today.

Just like with his directive portrayal of racism, Chung effectively uses small details to construct an authentic immigrant perspective. For example, grandma Soonja speaks Korean but learns a few English phrases from her grandchildren, and the parents navigate the world in Korean-accented English. Meanwhile, the children switch back and forth seamlessly, their English sounding just like that of the white kids. The rice cooker occupies prime real estate on the counter. The kids wear American clothes that were obviously picked out by their Korean parents. In making the story realistic down to the minute details, Chung successfully invites the audience into the Yis’ world instead of merely sprinkling in some facts about “how the Koreans live.”

While the film is a Korean immigrant story, it is interwoven with universal emotions that the cast portrays amazingly. Yeun’s Jacob is in a constant state of frustration. He wants to succeed at something and better support his family but is thwarted by life’s circumstances. Jacob rarely yells, yet as he bids goodbye to his farmhand, Yeun effectively conveys Jacob’s desire to scream beneath the suppression of his own emotions. Han, as Monica, always puts on a smile for her mother and children, but her exhaustion and stress caused by Jacob’s risky farming endeavor are always evident in her eyes.

The rest of the cast’s performance is similarly layered and subtle, showing the audience not only how the characters present themselves to the world but also how they truly feel. Emotions are rarely publicly displayed, but the undercurrents constantly pluck at the heartstrings of the audience.

What struck me throughout the film was David running around in his cowboy boots, yet stopping to remove them when he enters the house without fail. Such a small gesture feels emblematic of the second-generation immigrant experience; We may often dress and even sound like white America, but there are always traditions we won’t ever break. I watched this movie with a white friend of mine, and I’m not sure she caught this detail.

There’s a universal story in “Minari” everyone can enjoy, but there are also subtle love letters to diaspora communities that not everyone can understand, and that’s the beauty of the film.