As The Hoya arrives on newsstands today, Americans across the country will go to the polls to decide the leadership of their states and, ultimately, the composition of the 114th Congress.

Of course, when we say millions of Americans, we mean several million fewer Americans than those who voted in the 2012 presidential election. And who can blame them? Although the D.C. political machinery has geared up and anticipated for this election for months, Americans by and large have tuned out.

Perhaps this is because they sense that however the Senate swings, there will be no significant effect except in the jockeying for the 2016 campaigns. With opposing parties in control of Congress and the White House, Americans will have to wait for a new president for new policies.

After a brief and failed window for legislative activity in 2013, by the time a new president takes office in January 2017, it will have been six years since the American government produced meaningful policy responses to the issues facing the country.

Everybody has their favorite scapegoat — our “Intro to Political Science” professor from Spain likes to blame James Madison — and often, the allegation reveals more about the accuser than the defendant (for example, that professor hates Virginians).

The two of us, however, have our own favorite people to blame for the failure of the bicameral system: modern conservatism and national disillusionment.

First, the GOP (Grandpas-Only Party, as we lovingly call it): the party of Reagan that seems to have discovered they can accomplish their oft-repeated electoral purpose — to eliminate their own usefulness — even without someone as devilishly handsome as Reagan in the Oval Office.

But if federal dismantlement is your aim, all you need is a Boehner, a McConnell and a few radio personalities to whip people up into a frenzy of, well, nothing. Admittedly, this is a remarkable achievement: Republicans have achieved their fundamental goal with only a minority control of government.

Americans are not tuned into the events by which we ought to judge our leaders, and they certainly are not writing them down. Instead, what the eight to 10 tossup Senate races around the country show is that modern governance in America is largely decided by a deeply ambivalent coin flip, based on the last two months’events and the influence of those who even bother showing up.

For some of us, this is great news. Power dissipates back to the states, to localities or to citizens, who presumably understand more accurately than Michele Bachmann what actually makes people happy (if you were wondering, her answer is children who vote Republican).

Perhaps less commendably, however, power will also shift to the private sector. Now before Hoyas for Liberty sets Tucker’s N Street home on fire, we are not referring to the private sector of (most of) our youths: white picket fences, community organizations, churches, small businesses. Instead, we mean the private sector of the McDonough School of Business Class of 2015’s future: Wall Street, corporations retaining expensive lobbying firms staffed by disillusioned government majors, and consulting firms much better at taking from consumers (and more willing to do so) than consumers will ever be at taking from business.

For America’s institutional structure to work, every piece needs to participate. And by participate, we mean fight tooth and nail for every last scrap of power that it can appropriate unto itself. Not because voters can get more funding, more goodies or more glory that way, but because in this adversarial system, we need an actual fight to express our beliefs, regardless of who might win.

The important thing is that someone wins, rather than continue the victory-less, changeless purgatory of do-nothing Congresses and continuing resolutions in which we’ve been stuck. 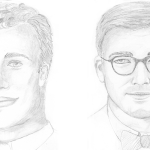 Tucker Cholvin and Thomas Christiansen are seniors in the School of Foreign Service. Culture Clash appears every other Tuesday.