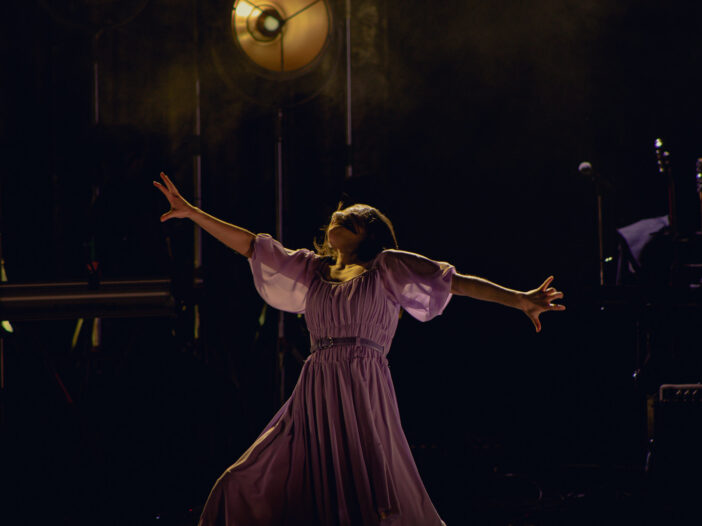 Fresh off of claims of retirement and a few days late due to a crew member catching COVID-19, Mitski strolled out in front of a glowing white door at The Anthem to a crowd of young adults.

Rocketing to fame after her songs “Washing Machine Heart” and “Nobody” went viral on TikTok, Mitski has come to embody the “sad indie girl” stereotype — someone to turn up after shutting the door to the bedroom and yelling into a pillow.

On tour for her sixth and most recent album, “Laurel Hell,” Mitski reckons with the trappings of para-social relationships as an incredibly private individual in an increasingly connected world.

Mitski is renowned for her eccentric, clear ruminations on love and desperation. As she began singing about spoons and the moon in “I Bet on Losing Dogs” and “Your Best American Girl,” Mitski tried to croon into her trademark melody of longing, but she seemed restrained by the physical elements of live performance.

While Mitski’s voice remained controlled, tight and in-tune, she was unable to envelop the crowd in a haze of desperation like the angst within her lyrics.

Unlike the similar crowd that drove her to renounce her role as a performer in 2019, Mitski actually seemed to draw her energy from attendees at The Anthem, crouching, kicking, bopping and flailing her head to their feedback.

After all, for this tour Mitski has incorporated studies of theater and choreography to supplement her performance, working with Monica Mirabile of FlucT and reading actors and directors alike to lend an edge to her performance.

As she gracefully collapsed after the energetic, pop-infused anthem “The Only Heartbreaker,” it was apparent Mitski was on stage as not merely a singer but also an actor and dancer. It was as if she could not even see the audience. Trapped within the narrative of her performance, Mitski dragged the microphone across her neck during “Working for the Knife” and chased paper airplanes during “Goodbye, My Danish Sweetheart.”

Yet since each lyric was interpreted in a literal manner with her gestures, the intentionality behind her movements came off contrived. Mitski is defined by the way she resonates personally with listeners; she is the voice that echoes around bedroom walls when no one is around.

Acting out the lyrics imposes a strictness of interpretation against her highly emotional outpourings, disconnecting the crowd from their personal renderings of her music.

In fact, Mitski never acknowledged the audience during her performance, abstaining from checking in on their stamina or cracking jokes, setting a fine boundary like a character in a play.

Mitski’s choreography and her carefully delivered lyrics underscored how the audience was only supposed to peer into her life, not directly engage with it.

Nonetheless, it felt indecent to listen to her voice emanate from a stage instead of from a pair of headphones, floating in and out of a dimly lit, smoke-screened audience.

But amid this distance, vulnerability was laid bare to glisten between registers. Mitski collapsed and stumbled in a trance of emotion, rising slowly and sprawling out again before beginning “Geyser” with a soft, determined, “You’re my number one.”

Enough to make throats catch, she repeated it, quivering and intense, almost a whisper to herself. This song falls flatly on the album due to its heavy, faux-movie score strings, but in person, “Geyser” grasped the audience as Mitski stripped it down to that one, raw lyric.

On the red drenched stage for “Heat Lightning,” she tasted every intonation of “I surrender,” so delicate and heartfelt compared to the removed and somewhat mainstream tone of the album. But these sweet interludes couldn’t mask the chilly, sterile efficiency of the entire show.

The encore seemed heavily rehearsed — the crowd did not bother waiting with bated breath. Mitski didn’t hesitate before taking the stage again for the slow, waltzing “Two Slow Dancers,” despite no calls of encore. Still, the witty opening lyric, “Does it smell like a school gymnasium in here?” was still met with twinkling laughter.

Mitski ended her performance by swinging open the portal-like door framing the stage and stepping through it, disappearing for the night. It was only in the brief silence thereafter that the arena truly felt like the confines of a bedroom.