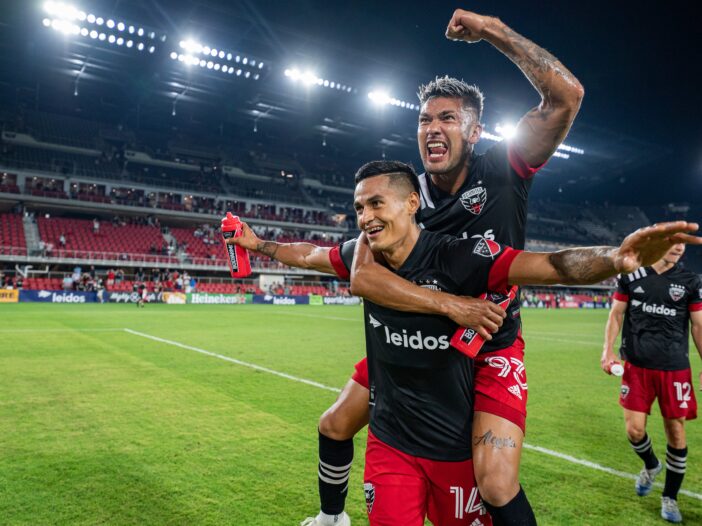 Carolina Panthers and Charlotte FC owner David Tepper has eyed a Major League Soccer (MLS) expansion team in the Carolinas ever since he bought the Panthers in the summer of 2018. After the COVID-19 pandemic delayed their inaugural season from 2021 to 2022, Saturday’s match was Charlotte’s soft introduction to the MLS ahead of their upcoming home opener on March 5. For D.C. United, 2022 presents an opportunity to compete in the playoffs just a year after they missed qualification by one point.

Fans including Nicole Gentner, a D.C. United season ticket holder from Springfield, Va., turned out in large numbers early for the pre-game tailgate.

“There’s a lot of people, it’s kind of cold and it’s the earliest start to the season that I’ve experienced,” Gentner said in an interview with The Hoya. “I’m hopeful that we’ll do really well this season.”

Fireworks shot out from midfield as the two teams kicked off the historic game just after 6 p.m. After a VAR review overturned Charlotte’s first goal in team history, D.C. United took control. United forward Michael Estrada converted a penalty kick into the first score of the night after a hand ball in the penalty area by Charlotte midfielder Brandt Bronico.

In the four minutes of stoppage time added to the end of the first half, Estrada launched one from outside the box to push United’s lead to 2. In the next period, United continued their dominance. United forward Ola Kamara scored a close-range shot off a corner kick 65 minutes into the match, propelling the score to 3-0, where it remained through the final whistle.

Under second-year head coach Hernán Losada, D.C. United has experienced heavy turbulence. Last season, excitement over the club’s 7-1 victory over Toronto F.C. was tempered by their 0-6 loss to New York City F.C. just months later. Looking back, Losada, 39, still sees a lot to build on from that season.

“Everything that you saw last year and, [at] moments, tonight is the way we want to play,” Losada said in a post-game press conference. “You can’t start better than this.”

“We’re all a bit more comfortable with each other,” Gressel said in a post-game press conference. “We know what we want, we know who we want to be and we know how we want to approach the season.”

Fans traveled from near and far to cheer on their team Saturday evening as United — one of the league’s original 10 teams at its founding in 1996 — took on the newest expansion team, Charlotte FC. For Charlotteans, particularly high school student Quinn McGuire, an MLS team in their city is long overdue.

“Charlotte is big in youth soccer, so it’s nice seeing it in professional [soccer], too,” McGuire said.

Among the players on Charlotte FC’s first-ever roster is former Georgetown standout Chris Hegardt. The 20-year-old midfielder played on the Seattle Sounders U17 team when they made history as the first MLS team to win the Generation Adidas Cup. Then, he helped the Hoyas on two NCAA tournament runs before Charlotte FC acquired his homegrown player rights from Seattle in January of 2022. Hegardt only received a few minutes of playing time at the tail end of Charlotte’s first match, but he still offered plenty of gratitude following the game.

“[I’m] so proud of this team and the fight that we showed,” Hegardt wrote via Instagram. “So grateful for all the fans that traveled to support us. We will continue to work hard for you.”

D.C. United next takes on FC Cincinnati (0-1-0) on Saturday, March 5, at TQL Stadium in Ohio. On the same day, Charlotte FC will host the LA Galaxy (1-0-0) at Bank of America Stadium in a match expected to break the MLS attendance record of 72,548 fans currently held by Atlanta United FC.