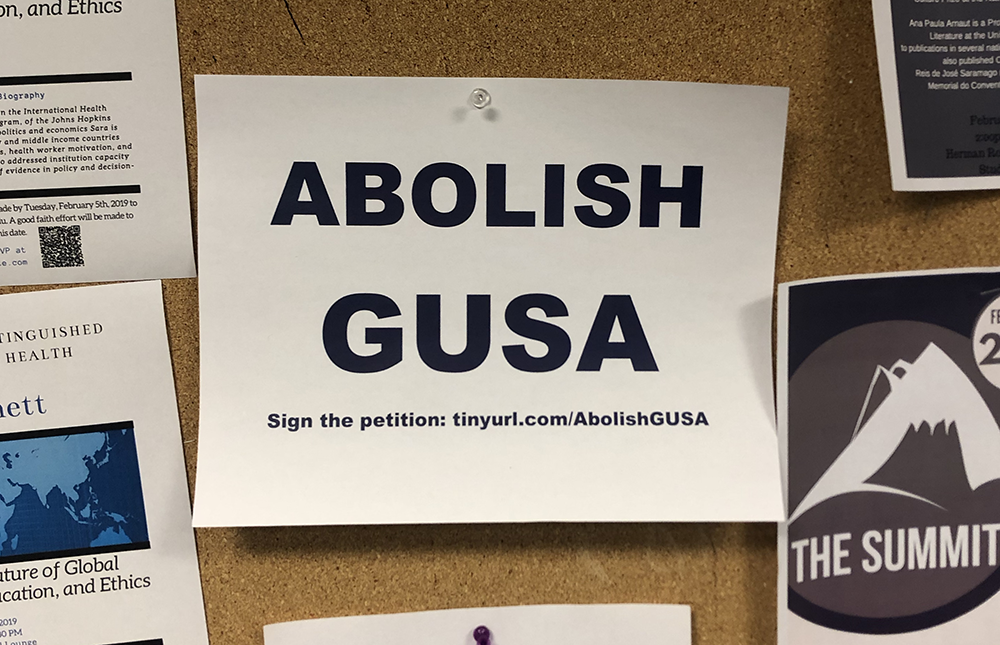 Abolish GUSA, a movement seeking to replace GUSA with a more efficient and inclusive system of student government, began distributing the posters Jan. 27. The posters include a website URL directing students to sign up to join the movement.

Abolish GUSA is acting in the interest of students and will articulate its vision for a new student government soon, according to the group.

“We are passionate Hoyas who want to see a better future for our fellow students. We are Georgetown,” Abolish GUSA wrote in a statement to The Hoya. “We are currently drafting a framework for a better system that will put the power of student government back into the hands of the student body where it belongs.”

GUSA senator and former GUSA presidential candidate Logan Arkema (COL ’20) signed up as a member of Abolish GUSA. Arkema said he hopes GUSA will be abolished and replaced with a more effective form of student government. Arkema ran a satirical campaign during last year’s GUSA executive election as Batman with the aim of encouraging students to not take GUSA so seriously.

GUSA is an ineffectual institution that benefits its current members more than the student body, according to the statement.

“We believe that GUSA’s institutional structure inherently facilitates corrupt resume-building and stagnant inaction,” Abolish GUSA wrote on its Facebook. “GUSA has proven itself time and time again to be an ineffective advocate for student voices. Students have rightfully lost faith in GUSA and its claim to be a force for good on campus.”

The group claims to have broad support across campus, reflecting student agreement that GUSA is not working properly for students.

“Our support grows by the hour and undoubtedly will continue to grow in the coming weeks. We have supporters of all class years, all political ideologies, all personal backgrounds, and even GUSA senators themselves,” Abolish GUSA wrote.

Abolish GUSA declined to comment their membership numbers, but wrote in a statement to The Hoya that it will release statistics at a later, unspecified date.

Abolish GUSA formed out of many complaints from students about GUSA. GUSA is a frustrating place to work, and many students are not adequately represented or included in GUSA, according to Arkema. There are no female senators representing the class of 2022 this year, and one female senator was elected this fall out of 14 races.

“Most of the people inside of GUSA don’t like GUSA,” Arkema said in an interview with The Hoya. “Women are underrepresented in the GUSA senate. All of GUSA, both the executive and the senate, has, at least in my conversation with folks and what I have seen and heard, been toxic, especially to individuals with underrepresented and historically marginalized identities.”

Arkema said he hopes to establish a new student government based on incorporating a diversity and abundance of student voices currently unaffiliated with GUSA.

“I want the conversations to really include and be centered around those who generally stay away from GUSA,” Arkema said.

GUSA should not brush off concerns raised by Abolish GUSA and should instead seek to understand their origin, according to GUSA President Juan Martinez (SFS ’20).

“While I don’t believe that simply abolishing GUSA is the right path forward, I do think these concerns should be taken seriously. If students are advocating for the dissolution of an institution, we need to seriously reflect on why that institution is perceived as valueless,” Martinez wrote in a statement to The Hoya.

This year’s Abolish GUSA movement comes after multiple referenda to reform the GUSA senate in the past three years. Last spring’s referendum, the only one to pass of the three, replaced the previous distribution of senators by geographic location with a new system based on class year.

The current structure of GUSA encourages officials to pursue re-election instead of the interests of the student body, according to Ajayan Williamson (COL ’21), another student who has publicly expressed support for the movement. Williamson posted a meme satirizing the upcoming GUSA election on Facebook on Monday afternoon with the caption, “Abolish GUSA.”

“The goal of student government should be to enhance the on-campus life of the students that go to our school, and I don’t think that the current structure of GUSA is one that incentivizes people to come into it with that mind,” Williamson said in an interview with The Hoya. “It incentivizes people to come into it with a more self-serving mind because they are there to get elected or to get elected again.”