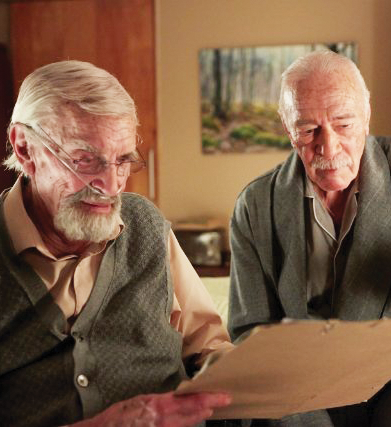 Atom Egoyan’s “Remember” feels like a number of films in one. At its heart, it is a psychological thriller complicated by a main character with increasingly worsening dementia. The story, rife with unpredictable plot twists, tells the story of 90-year-old Zev Gutman, played by the talented Christopher Plummer as he sets off on a vengeful journey to find the Nazi guard who killed his family in Auschwitz. Benjamin August’s script is complex and unique, capturing the pain, guilt and nostalgia of confronting one’s past. Nonetheless, the farfetched nature of the plot is, at times, hard to look past.

Egoyan is no stranger to the strange. His repertoire is a mixed bag of the critically acclaimed, the panned and the cult favorites. While his early films, like “Exotica” and “The Adjuster,” were sexually charged dramas, “Remember” is more in line with his more recent, thriller-based works. The story begins in a retirement home as Zev attends the last Shiva of his wife Ruth, marking a year since her death. The experience baffles the old man, whose dementia has left him with constant confusion and anxiety. The audience learns about Zev’s life as he does, through the help of his friends and family. The 90-year-old widower, father and grandfather was once a prisoner at the Auschwitz concentration camp, where the rest of his family was murdered.

At the home, Zev has grown close to Max (Martin Landau), a fellow Holocaust survivor. Max is still in complete control of his mental faculties, but is bound to a wheelchair. Together, they devise a plan to get revenge on Otto Walisch, the man behind the death of their families. Through explicit instructions, letters and financial preparations, Max guides his confused friend on a journey across the country to find and murder their enemy. However, everything is not as it seems.

In contrast to the style of his early work, Egoyan’s style in “Remember” is simple, with few flourishes or tricks. This approach is compelling, and enables the story to maintain a sense of realism throughout its many twists and turns. This is August’s first screenplay, which explains some of its naivete. Zev is able to bypass the rules and regulations of modern day society and law, solely because of his loveable old age. The story is full of unrealistic moments, but the young writer’s unique take on the often-overdone revenge storyline is still impressively engaging.

August has mentioned that he wanted to write a movie featuring older actors, who are typically relegated to supporting roles. Plummer and Landau, two of the most revered actors in Hollywood, deliver powerful performances that prove quality acting has no expiration date. Landau is unwavering in his commitment to the role; unfortunately, the physical limitations of his character limit his number of scenes. The dementia-ridden mind of Zev allows Plummer to express both past and present emotions, a balancing act that he maneuvers incredibly gracefully. Instead of viewing memories of Auschwitz via cliched flashbacks, we watch a man tackle his decades-old demons as if they were happening now.

“Remember” cannot be written off as just another Holocaust film. Here, the Holocaust’s most important role is to provide a backbone to an intricate mystery; it is as much a story about old age and memories as it is about the genocide. At times, the thrilling nature of the movie seems at odds with its protagonist. How can someone with dementia participate in such an active and mentally complex story? Although the genre and Zev’s handicap seem paradoxical, the complications make for an innovative story propelled by doubts and confusion.

That being said, this script comes with a number of moments that defy reality. The most painful plot hole revolves around a Glock pistol that Zev easily obtains, despite his obviously diminished mental capacities and the seller’s clear concerns. Moreover, Zev proceeds to carry the gun across the Canadian border unquestioned; even a police officer who confronts him has no qualms about Zev’s possession of the weapon.

The themes of mental health and the horrors of Auschwitz imbue this film with complex emotions that typically go untouched in tales of retribution. Zev is filled with doubt in every step he takes in his journey. Egoyan fills “Remember” with attention-grabbing intricacies. However, these plot twists cannot exist without suspensions of disbelief. For some movie buffs, “Remember” may be reminiscent of Hitchcock’s classic thrillers: the plot feels improbable at points, but we still can’t look away.