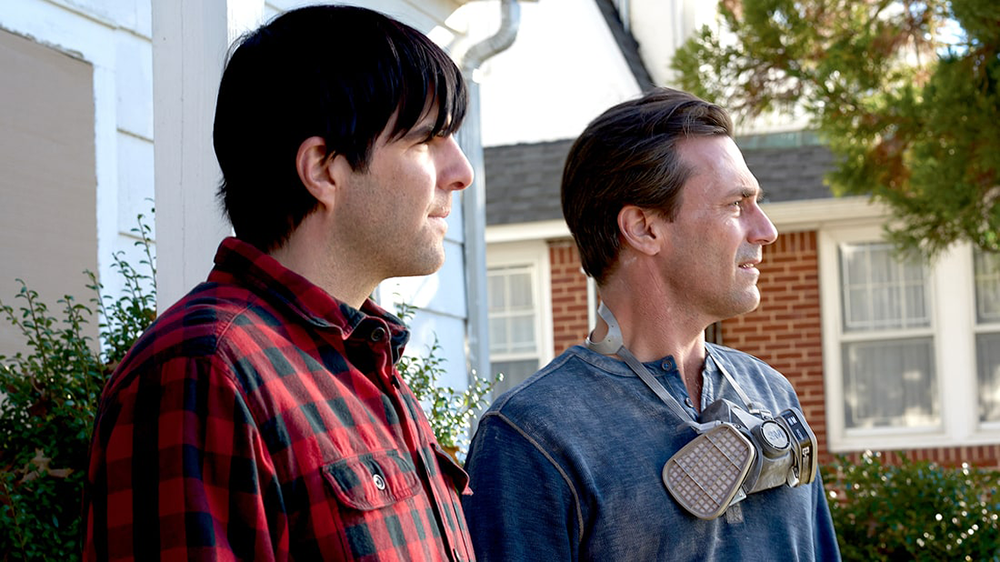 The film tells the story of Josh, played by Zachary Quinto, a deeply troubled man with some undefined “condition,” and his inept new therapist, Emily, played by Jenny Slate. When Josh’s TV-star brother Craig, played by Jon Hamm, comes back into town, he begins sleeping with Emily and appearing in the increasingly unstable Josh’s hallucinations.

Many of the film’s faults lie in Shoaf’s inexperience. This film is his first feature- length film in either the writer’s or director’s chair, and his inexperience is an anchor around the production’s neck. The script meanders uncomfortably with no real driving force and jarringly vacillates between comedy and psychological thriller.

Emily’s storyline feels like a quirky romantic comedy about a young therapist’s burgeoning relationship with her client’s brother after a series of past romantic failures — the type of work toward which Slate typically gravitates, as she is best known for her roles in “Parks and Recreation” and “Zootopia.”

Josh’s storyline, on the other hand, is a sober, stark examination of mental illness. While either story could have made an interesting movie, the tonal imbalance makes for an unnerving viewing experience, and the clashes are especially perceptible during the extended, poorly scripted therapy scenes between Emily and Josh.

Another notable weakness lies in the film’s refusal to provide the audience with any clarity with regard to Josh’s mental illness. The script references a litany of conditions that he might have and makes passing references to his “condition,” but nothing is concrete. All the audience knows of his symptoms are his hallucinations and an oft-referred-to, but never explained, breakdown during his teenage years.

Since so much of the film deals with Josh’s illness, it is strange that Shoaf takes so little care to characterize it. The introduction of Josh’s mysterious love interest, Hannah, played by Sheila Vand, who may or may not be another of Josh’s hallucinations, would be more compelling if the audience knew a little more about Josh’s past and the details of his condition.

Eric Lin’s cinematography, paired with Shoaf’s direction, provides the film with a pervasive air of discomfort, from its ambient noise soundtrack to camerawork that lingers just a moment too long on certain actors. Shoaf and Lin appear to be overly fond of close-ups where an actor speaks directly to the camera, pulling this shot out near the end of multiple scenes that highlight Josh’s instability. However, this technique only serves to further alienate and disquiet a restless and uncomfortable audience.

With very little to work with, the talented cast is left hanging. Hamm rests on his considerable charm and good looks, seemingly aware of the film’s low quality and extending only minimal effort. However, the film’s superficial character requires little more than Hamm going through the motions with the right blend of likability and distance that catapulted him into stardom in “Mad Men.” Vand similarly floats through the film on her enigmatic charm that befits her cypher of a character.

Slate does a fine, if tentative and slightly awkward, job in the more romantic comedy style scenes, but seems in over her head in the darker, dramatic moments. While some of this issue may be attributed to the deplorable writing, her performance lacks conviction, as she often appears somewhat confused. It is as if Slate is not sure how to play a given scene; viewers get the sense that she is as confused by her character’s decisions as they are.

Early in the film, there is a scene contrasting Quinto and Slate’s viewing of the same television show. While the scene is intended to highlight the differences in their characters, it ends up serving more to show the disparity in their performances. Where Slate is faltering, Quinto commits firmly. His portrayal of Josh reads true in every vacant state, self-conscious twitch, and hesitant smile. In a script that treats Josh’s mental illness as a quirk, Quinto turns the role into a fully fleshed out, achingly real person. He is equal parts enthralling, terrifying and sympathetic, none of which the script explores in as much depth as the character deserves. It is a shame that such a great performance was wasted on a movie this bad.

“Aardvark” feels remarkably long for its short run time and has little substance to fill the narrative. With a substantial lack of depth, interest or entertainment, there is little reason to waste time or money on this meandering mess of a film.