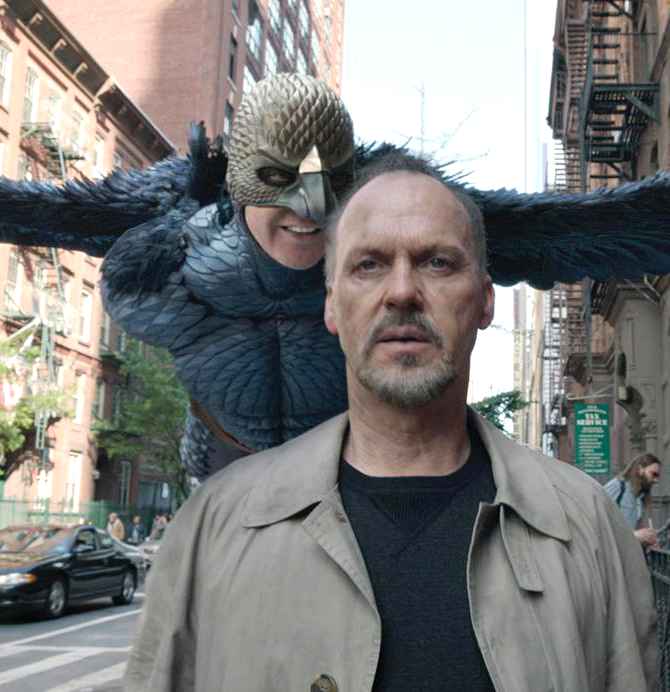 “Birdman” is the story of Riggan Thomson, a washed-up film actor best known for his role as the titular superhero Birdman, a franchise that peaked more than 20 years ago. His career has been stagnant since he turned down “Birdman 4” and in a last-ditch attempt to salvage both his acting career and his personal self- worth, he is funding, writing, directing and starring in an adaptation of Raymond Carver’s novel “What We Talk About When We Talk About Love” on Broadway.

Along with a noteworthy cast including Emma Stone and Naomi Watts, Thomson is played with aplomb by superhero film veteran Michael Keaton, who is most well-known for his performance as Batman in Tim Burton’s 1989 adaptation. And perhaps it is this personal similarity between the character and the actor that allows Keaton to bring Riggan to life so vividly, capturing the angst and drive of a man hell-bent on earning the respect he believes he has always deserved, but has never been given.

Just like Keaton has never really been able to move fully beyond Batman, Riggan is haunted by his past as Birdman. But unlike Keaton, Riggan is literally haunted by Birdman, who exists in this world as a dark and threatening voice in Riggan’s head. This specter loudly and regularly forces the main character to consider his bleak fortunes and his failures as an actor, director, husband and father. In other words, the Birdman in Riggan’s head makes him face the reality that he’s a terrible person.

When Mike Shiner, a new egomaniacal co-star (played by the ever-present Edward Norton) steps in and steals the positive public attention Riggan so craves just days before the premiere, Riggan and the voice inside his head become even more embroiled in maintaining the balance of sanity, depression, ego and the impending opening night performance, not to mention the subsequent New York Times review that will guarantee either financial success or ruin.

As a film, “Birdman” is an excellent introduction to the concept of magical realism. Popular in Spanish literature, the genre blends elements of the fantastic and unexplained into an otherwise familiar reality. Director Alejandro González Iñárritu certainly does not shy away from injecting the film with both fantastic and disorienting aspects. From the first shot, Riggan is shown to possess psychic powers — levitation and telepathy — though as the film progresses it becomes more apparent that these abilities are not real, but are rather a manifestation, like Birdman’s constant presence, of Riggan’s clearly unstable mental health. And in a particularly memorable scene, the world of his Birdman past blends into Riggan’s real world as a massive battle rages around him that looks very familiar because it could be from literally any big-budget blockbuster of the last eight years.

Iñárritu makes beautiful films, but many of his techniques are designed to throw off the audience, to make them hyper-aware of their role as a viewer and to make them uncomfortable. He does this with a technique called the “long take,” where extended periods of action and dialogue are captured in a single sweeping take. This can mean extended close ups of actor’s faces while they exchange dialogue or a frantic walk-and-talk that swings through the small backstage corridors of the Broadway theater where the majority of the film takes place. It can mean dizzyingly fluid shifts of perspective or a single shot lingering on an empty hallway for enough time to make the viewer wonder, “What is happening that I can’t see?”

This film asks some very big questions about what it means to be loved and respected, about the fallacy of both the big-budget superhero film industry and the self-congratulatory nature of Broadway and stage performance in general. One calls itself art, while the other knows it’s not even close. Neither are what they market themselves to be. The same is true of the flawed and broken people that populate the film: Riggan and the voice in his head; his daughter Sam (played by Emma Stone), who is fresh out of rehab; Shiner and his pursuit of honesty in his craft but not with his wife and co-star Lesley (Naomi Watts). Everyone who lives in the world of Birdman is a terrible person. But what’s worse: being a terrible person, or masking that with personal conviction that you are right and just and that everyone around you is a spineless hack?