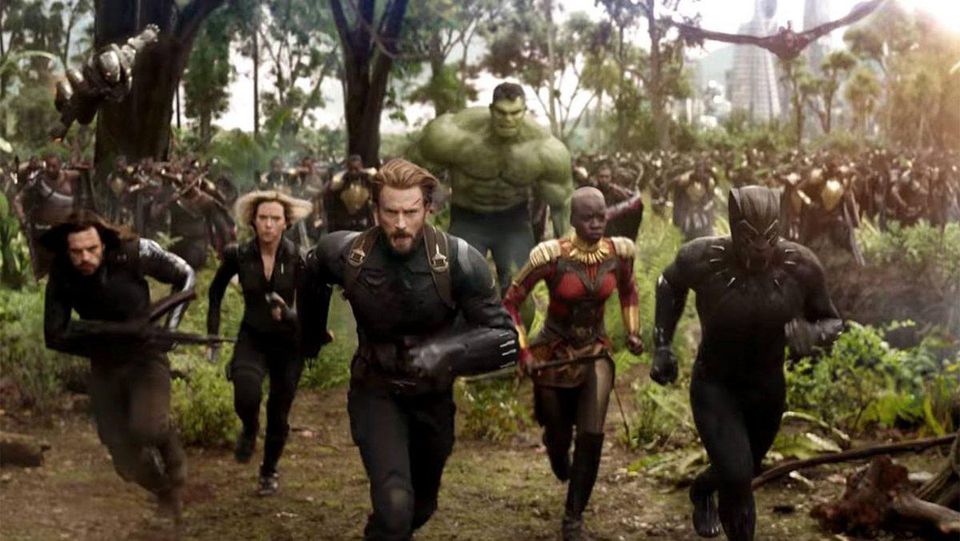 The culmination of 10 years of character development and plot groundwork through films like “Captain America: Civil War” and “Guardians of the Galaxy,”  “Avengers: Infinity War” is an epic blockbuster in which the stakes are staggeringly high. The film proves to be a thrilling crossover with fan-favorite characters of the Marvel Cinematic Universe, or MCU.

Directed by Anthony and Joe Russo, “Avengers: Infinity War” is Marvel’s most expensive and ambitious film to date, costing $321.2 million. The film gives every hero who has been introduced in the MCU’s 18-movie arc their own storyline and moment to shine. An unlikely combination of earth-dwelling superheroes and extraterrestrial renegades, the Avengers and the Guardians of the Galaxy must join forces to prevent the antagonist, Thanos, played by Josh Brolin, from acquiring Infinity Stones, which are powerful magical objects scattered throughout the universe. If Thanos finds and captures all six stones, he will be able to create a gauntlet that would grant him the power to destroy the universe.

Despite the sheer number of characters, plotlines and relationships to address in a single film, “Avengers: Infinity War” finds a way to balance it all. Along with the substantial amount of transitions between different settings and individuals, the tone also shifts depending on who is on the screen. Despite all the factors that required consideration, the movie seamlessly intertwines each character into the greater storyline.

The interactions between characters were a definite highlight of the movie as well; audiences are given the chance to see unlikely partnerships arise in the face of this conflict. The banter between characters like Iron Man, played by Robert Downey Jr., and Doctor Strange, played by Benedict Cumberbatch, as well as between Thor, played by Chris Hemsworth, and the Guardians of the Galaxy, provides a dose of humor at all the right moments. These scenes add levity that works well with the emotional and heartbreaking depths that the film reaches.

Among the star-studded cast of the film, Downey’s portrayal of Tony Stark, the playboy billionaire inventor inside the Iron Man suit, deserves admiration. “Avengers: Infinity War” is a stark reminder that 2008’s “Iron Man” is the film that marked the beginning of today’s MCU. While known for his snark and sarcastic one-liners, Stark proves to be one of the most well-developed characters in the colossal franchise, which is evident in his scenes throughout the movie. In the face of the intergalactic threat that is Thanos, Stark’s vulnerability and fears shine through Downey’s performance, highlighting the gravity of the danger.

Introduced in the final scene of 2012’s “The Avengers,” Thanos has only been a looming figure mentioned in passing in the movies preceding “Avengers: Infinity War,” but the character has been built up as the ultimate antagonist in the MCU. No hero or villain in the MCU has been this hyped-up before, and Thanos certainly delivers.

Not only does Thanos look the part of the villain with a heavyset build and a blocky, stern face, but he also proves to be more than a generic antagonist. Brolin succeeds in portraying Thanos as lethal, yet melancholy; Thanos genuinely believes killing half the universe is the best action possible for existence. Rather than believing himself to be a merciless mass murderer, Thanos is a villain who sees himself as the hero of his own story.

As the tension builds, the storylines of individual groups begin to converge with one another, until a climactic massive battle scene erupts at the end of the movie. It becomes easy to forget the computer-generated images behind each scene because of how realistic the fights seem. The action sequences throughout are visually spectacular and highlight the strengths and powers of each hero.

Behind each action sequence and emotional scene is the score composed by Alan Silvestri. Having already composed the music for “The Avengers” and “Captain America: The First Avenger,” Silvestri is no stranger to Marvel films and creates a soundtrack that perfectly underscores the emotions driving each scene.

The audience’s reactions during the screening were also a testament to the emotional depths of the film. Whether audible gasps during the intense last half hour of the film or cheers when Wakanda, the fictional African country that served as the setting for “Black Panther,” appeared on the screen, the visceral reactions of the audience enhanced the viewing experience.

With “Avengers: Infinity War,” the Russo brothers have succeeded in the difficult task of tying together characters and plotlines from a multitude of films, raising the bar for the MCU and superhero movies in general.