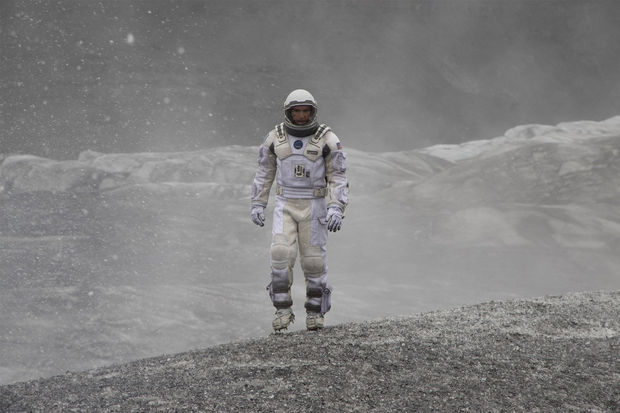 “Do not go gentle into that good night,
Old age should burn and rage at close of day;
Rage, rage against the dying of the light.”

In his newest blockbuster spectacle, “Interstellar,” director Christopher Nolan, who wrote the script with brother and Georgetown graduate Jonathan Nolan (COL’99), has created a visually stunning look at our universe and the impact of love, time, space and solitude on the human spirit.

Even though the title of the film is “Interstellar,” it takes a long time to get off the ground (literally). The first chunk of the film takes place on Earth – but not an Earth with which we are wholly familiar. After a catastrophic food shortage that wiped out huge swaths of the population, society now revolves entirely around farming and keeping humanity’s eyes trained on our own planet. But crops keep failing, and the farmer’s mantra of “next year will be better” is becoming increasingly hollow.

It’s in this context that we meet Cooper, played by Matthew McConaughey, who continues his impressive renaissance career with a powerful performance in this film. Cooper is a farmer, former pilot and single father raising his two kids with the help of his father-in-law. When his precocious daughter Murph (named for Murphy’s Law) begins to notice anomalies in her room that she blames on a ghost, she and Cooper stumble upon a secret NASA facility buried deep under the farmland, run by his former mentor Professor Brand (Michael Caine, playing the part of the old genius predictably well) and his scientist daughter Amelia (Anne Hathaway). They reveal that humanity is doomed to extinction and that its fate lies in finding a new home on the other side of a mysterious wormhole that has appeared near Saturn.

Once we finally take off and enter space… holy moley. The visuals are mind-blowing, plain and simple. There is a fitting term used in art history and theology called the “sublime.” It describes a sense of awe tinged with indescribable and overwhelming fear, of a confrontation with the infinite and the finite that approaches a feeling of divine understanding. The wide-angle images of space created for Interstellar are just that. They capture the vast, silent emptiness of space, its mind-boggling scale and just how small we are in that context. It took my breath away. I saw this film in Imax, and though it was the first time I had seen Imax outside my local science center, the picture was definitely sharper, cleaner and more precise than on an average screen. For this movie, it’s worth shelling out the few extra bucks for this level of detail. It was beautiful, and I could have watched hours of footage of the ship moving through space.

The relationship between Cooper and Murph, the bond of love between father and daughter, is ultimately what ties the entire movie together – across galaxies, through wormholes, beyond time, planets and singularities. It sounds obscenely cheesy on paper, but the relationship between Murph and Cooper and the reality of the relativity of time give every action taken by the crew of the Endurance extra emotional weight. The clock is always ticking, but sometimes it’s ticking at a different speed than the rest of our universe. Which also ties in to one of the big problems of the movie – the scientific concepts it tries to convey to a general audience.

Most of the scientific concepts that Nolan uses for the film are real theories, and he even brought on a theoretical physicist, Kip Thorne, to act as one of the film’s executive producers. But there’s a reason not many people study the physics of, say, black holes: it’s really confusing. For an average viewer, the discussions of which forces can cross dimensions – light, time, gravity – are a lot to digest and create really confusing plot holes towards the film’s conclusion.

My advice to you is, no matter what your preference, go to the bathroom BEFORE the movie starts. The movie clocks in at about 3 hours long, and that doesn’t even include the trailers before and the credits after. But this movie really couldn’t be any shorter than it is. The scope and scale of the story that Christopher Nolan is trying to tell does not lend itself to cursory glances. It’s a big story with bigger ideas in an even bigger setting, and it’s the kind of visual movie-going experience that will blow you away.