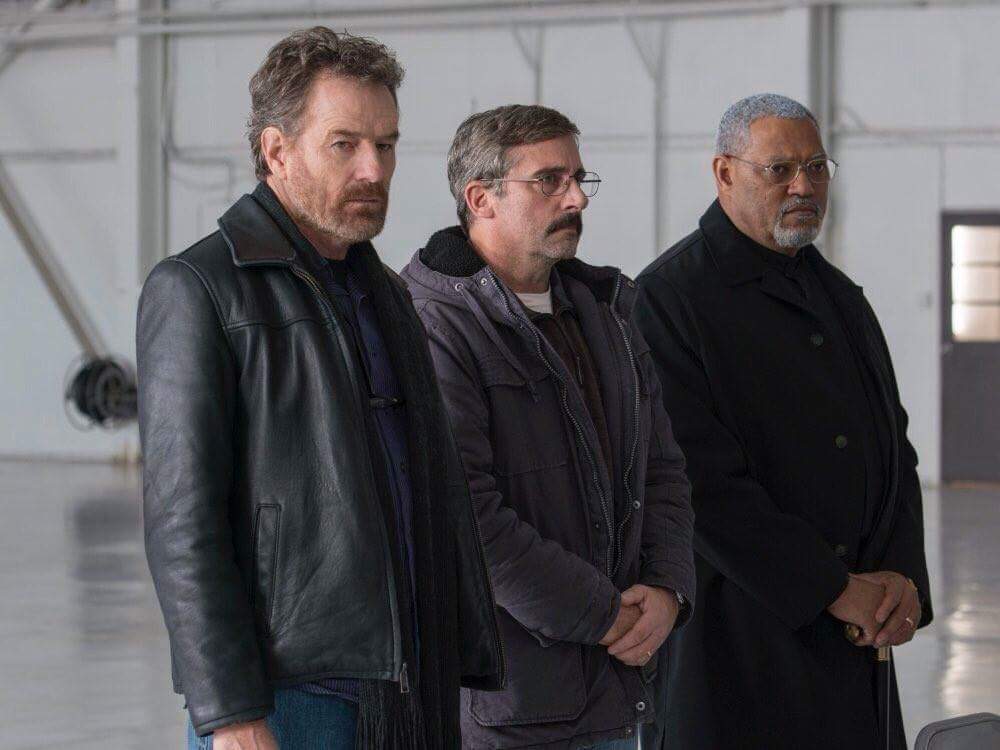 Striking the perfect balance between heartwarming and heart-wrenching, director Richard Linklater’s newest film, “Last Flag Flying,” is a must-see. Starring Steve Carell, Laurence Fishburne and Bryan Cranston, the movie explores grief, friendship and the enduring camaraderie of veterans. Based on the 2005 novel of the same name by Darryl Ponicsan, “Last Flag Flying” is the unorthodox sequel to “The Last Detail,” Ponicsan’s first novel and film adaptation. In its 124-minute run time, “Last Flag Flying” inspires laughter, tears and self-reflection.

Decades after serving together in Vietnam, veterans Larry “Doc” Shepherd, played by Carrell, Sal Nealon, played by Cranston, and Reverend Richard “Mueller the Mauler”  Mueller, played by Fishburne, reunite. Just months after losing his wife to cancer, Doc learns that his 21-year-old son, Larry, Jr., has died while serving in Baghdad and will be given a full honors burial in Arlington National Cemetery.

Grieving and alone, Doc seeks out Sal and Richard, his closest buddies from the Marine Corps, and enlists their support in putting his son to rest. The film follows the trio as they rekindle their friendship, reminisce about old times and help Doc come to terms with his loss.

“Last Flag Flying” rightfully and beautifully earns its classification as a comedy-drama. Laugh-out-loud moments are deftly woven throughout the film and manage to bring light without detracting from the poignancy of the heavier themes.

Screenwriters Linklater and Ponicsan have created a script that successfully and tactfully captures the way that difficult circumstances can lead to rediscovered and newly strengthened connections and that even during grieving, there is room for joy.

The core of the film’s power lies in the performances by Carrell, Cranston and Fishburne. Their characters are distinct, well-developed and realistic, and their interactions throughout the film span from bitter and regretful to witty and hilarious. Furthermore, the characters are inextricably bound to one another by their shared experiences. This leads to conversations that are fascinatingly colored by the intimate knowledge that these men have of each other.

One of the most compelling aspects of “Last Flag Flying” is its commentary on veterans and the lasting effects of service. The Marine Corps is the root of the plot, as it is the cause of the trio’s friendship, but it also plays a deeper role in the characterization of the film’s protagonists. Doc, Sal and Richard have been shaped by their experiences in service and they are deeply and continuously affected by their memories from Vietnam.

Richard calls the war “a dark period in life,” Sal drinks to fend off memories and Doc admits to trying to convince his son not to enlist. The discipline, respect and camaraderie that define the military are also driving forces of this film. In a humorous yet self-reflective moment, Sal even states that he has never truly identified as white, but rather classifies himself as “green,” because the culture of the Marine Corps is the only one that makes sense to him.

The lasting effect of the Corps is also juxtaposed with the experiences of newer blood. After Doc ultimately decides to bury his son at home, the military assigns an active soldier, Washington, played by J. Quinton Johnson, to accompany the body to burial. As the three veterans travel with Washington, they share stories and experiences about war, both comical and painful, and provide cross-generational insight into what it means to serve. This contributes to the deeply heartfelt and impactful, yet humorous nature of the film.

“Last Flag Flying” is a film that could have failed splendidly. It deals with death, it bluntly and unapologetically focuses on the effects of military service and it has an emotion-driven rather than action-driven plot, all characteristics that can break a film, rather than make it a success.

However, “Last Flag Flying” avoids these potential obstacles and instead shows itself to be a simple and sincere demonstration of grief, loss and friendship. Any moments of uncertainty only contribute to the film’s overall sentiment of humanism. “Last Flag Flying” breaks your heart and warms it; it makes you reflect and gives you hope; it inspires tears — both of joy and of sadness.