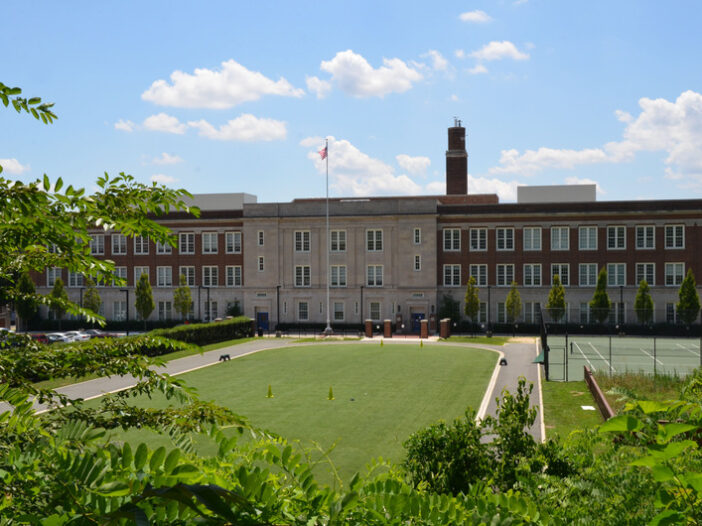 This article directly references content that is potentially upsetting. Please refer to the end of the article for on- and off-campus resources.

An unknown perpetrator has repeatedly defaced the property of Hardy Middle School in Burleith with hateful graffiti, triggering a police investigation for a suspected hate crime and widespread community outcry.

The graffiti was discovered on the 34th Street side of the school property, and on one occasion in front of the Safeway on Wisconsin Avenue. The graffiti first appeared May 17, followed by more messages May 20 and May 23, according to Eric Langenbacher, the president of the Burleith Citizens Association and a government professor at Georgetown University. The messages are filled with antisemitic tropes, references to Freemasonry and nonsensical phrases. All the graffiti has been written in chalk.

The bizarre content of the messages has led law enforcement to suspect the perpetrator may be dealing with issues of mental illness, Langenbacher said. Langenbacher was the first person to report the bigoted writings and has personally removed them. He has also met with investigators from the Metropolitan Police Department about the incidents.

“It’s pretty clear that it’s the same individual responsible because the handwritings are the same; some of the images that have been put up there are the same. It’s always kind of in the same spots,” Langenbacher said in a phone interview with The Hoya. “A lot of individuals, including the police, are of the opinion that there probably is a mental health issue involved as well. Some of the graffiti has just been weird.”

Bigoted messages on school property are frightening and are the antithesis of what the Hardy community represents, according to Martin Welles, a parent at the school and vice president of the Parent-Teacher Organization.

“Hardy Middle School is one of the most diverse, inclusive and high achieving schools in the District of Columbia. Whether the graffiti was targeted toward Hardy Middle School, or an opportunistic smear, there is no place for racist/antisemitic attacks in our community,” Welles wrote in an email to The Hoya. “Due to the school being closed as a result of the Coronavirus, school children did not have to witness it.”

Multiple instances of antisemitic graffiti have been uncovered in recent years on Georgetown’s campus. In May 2017, antisemitic messages were discovered in a Leavey Center restroom, adjacent to the Makóm Jewish gathering space. The following semester, swastikas were found painted in an LXR dormitory restroom.

In response to the hateful messages found at Hardy, community members drafted and circulated a letter condemning antisemitism and bigotry in the neighborhood. The letter has garnered over 149 signatures from residents of Georgetown, Burleith and other Washington, D.C. neighborhoods.

The already painful circumstances of the COVID-19 pandemic have made the appearance of the hateful graffiti all the more distressing, but the incident a reminder for the community to stand together, according to Advisory Neighborhood 2E Commissioner Elizabeth Miller, one of the letter’s first signers.

“It’s hard enough when the world is normal to see hateful graffiti,” Miller wrote in an email to The Hoya. “But, in these anxiety-inducing days of the pandemic when we need to be kind to each other and support our community the hate seems particularly painful. I urge our neighbors to be vigilant and if you see something, say something and report incidents immediately to the police.”