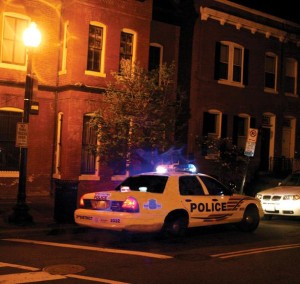 CHRISTINA BUCKLEY/THE HOYA
New D.C. protocol, effective since Tuesday, may lead to a rise in noise-related arrests by the Metropolitan Police Department.

An amendment to D.C. law went into effect Tuesday, placing harsher restrictions on disruptive noise and marking a major shift in the Metropolitan Police Department’s ability to crack down on gatherings such as student parties.

The Disorderly Conduct Amendment Act of 2010 states that making unreasonably loud noise between the hours of 10 p.m. and 7 a.m. is now an offense punishable by 90 days in prison, a $500 fine or both. The maximum fine has doubled from $250.

MPD will now arrest individuals in violation of the noise ordinance, the university’s director of media relations, Rachel Pugh, said on Tuesday. Since 2000, MPD had issued offenders 61D citations, which counted as arrests on record but did not result in detention.

MPD will enforce the law at all D.C. residences, regardless of whether they are university owned or privately leased off campus.

The university was informed of the changes by MPD over the weekend, university spokeswoman Julie Bataille said on Monday, and Vice President for Student Affairs Todd Olson soon began preparing an email to students to update them on the greater severity of this disorderly conduct statute.

“We understand from our local MPD district commander that officers may make an arrest when, in the officer’s judgment, the officer has observed ‘noise that is likely to create a disturbance of the peace,'” Olson said in the email, which was sent out on Wednesday evening.

Olson urged students to stay aware of the strict changes that lie ahead.

“Given that the law and MPD’s plans for enforcing it could have serious implications for you, we wanted to be sure you were alerted to it and to take this opportunity to remind you about the importance of thoughtful, respectful behavior in residential areas off campus at night.”

Moving forward, the university plans on working more with MPD and students to cut back on noise disruptions, disorderly conduct and possible student arrests.

“[We] will continue our many proactive steps to work with students and MPD to address issues before they become a major concern,” Bataille said.

A version of this story was originally published on The Hoya’s website on Feb 1.