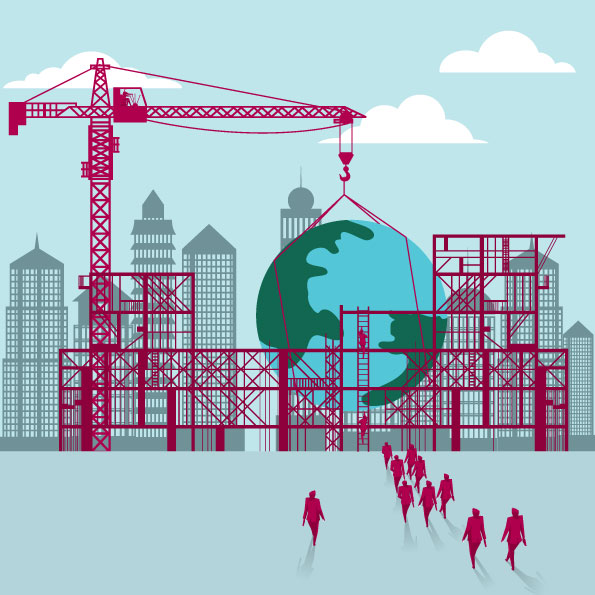 The McDonough School of Business and School of Foreign Service have collaborated to launch a year-long masters program in International Business and Policy (MA-IBP).

The master’s candidates will undergo six learning modules across three continents. In Washington, D.C. students will cover topics including global business strategy and the future of the global economy. Students will also spend two weeks abroad in Santiago, Chile and Frankfurt, Germany.

Karl F. Landegger Professor Mark Busch, academic co-chair for the MA-IBP program, which will launch in January, said one of the reasons Chile was chosen is the country is a good example of a small economy participating in the world market.

“Chile is the darling of today’s global economy,” Busch said. “It’s the beacon for what to do in a global economy as a small open market, and yet we see so few of them.”

According to Busch, Germany offers a critical perspective from which to begin addressing the consequences of Brexit, especially because it seems primed to become Europe’s next financial center.

“What will a Europe minus Britain look like? What will a Euro with a completely redone EU institutional framework look like? To see that, to get a sense for that, we thought it was important to go there,” Busch said.

The MA-IBP program is loosely modeled off the Georgetown-ESADE Global Executive MBA (GEMBA) program, in which Georgetown’s MSB and SFS partnered with the Escola Superior d’Administració I Direcció d’Empreses, a leading business school in Barcelona, Spain.

Busch said he hopes the collaboration between the MSB and SFS achieved in the GEMBA program will be further developed this coming January.

“You need the faculty to find the reasons to collaborate and to impress upon the students in the program their perspective filtered through the lenses of the other school,” Busch said. “That is something that we began with GEMBA and we will do even deeper with this program.”

“At a time when every school on earth is launching a global executive program, this has a very different feel to it,” Busch said. “When we did our market analysis of who our likely competitors would be, we were struck by how there are very few programs that take this particular tack on the global economy. We were quite emboldened by that.”

Deputy Dean for Executive Education and Innovation Paul Almeida, one of the program’s original pioneers, said the program is also special because it reflects both the pedagogy and principles of Georgetown. Almeida recalled his initial vision for the master’s program.

“Let’s design a program that’s uniquely Georgetown, that plays to our strength and proclaims to the world who we are,” Almeida said.

Almeida said Georgetown’s strengths lie in its international business and international relations curricula, which together constitute the crux of the program.

However, Almeida said he was also interested in incorporating Georgetown’s Jesuit values such as cura personalis and women and men for others. The program’s Social Action Project will allow students to use what they learn in the classroom in service to society.

“I believe Georgetown’s programs should always reflect that we are a Catholic and Jesuit school,” Almeida said. “[The Social Action Project] is where academia meets praxis.”

Students will work on their projects throughout the year, continually refining their efforts in light of their academic experience, to become internationally minded stewards of Georgetown-inspired service.

Busch said how the collaboration of the SFS and MSB allows for a more developed international perspective, and not just a simple study-abroad program.

“This is not just edu-tourism, this is a real effort to convey a mindset about globalization, and to be informed in a political economy sense as to why the global economy looks as it does, and therefore what to do about it,” Busch said.

Busch adds the program forces students to stretch intellectually and encourages them to utilize their abilities and think in a wider context.

“That requires base business school skills, but it also requires this additional layer which I think is the beauty of bringing together the School of Foreign Service and MSB. That hopefully is what the students will see starting in January 2017,” Busch said.

Zach Kelly (MSB ’16) said it is very important to make the MSB in particular a more global as well as interdisciplinary academic institution.

“I think the MSB’s renewed focus on interdisciplinary and international studies is a great thing for the university and the students within it,” Kelly said. “The MSB offers so much more than just basic finance and accounting courses, and this is a great example of their dedication to combining practical business knowledge with values that are at the core of Georgetown and the Jesuit tradition.”