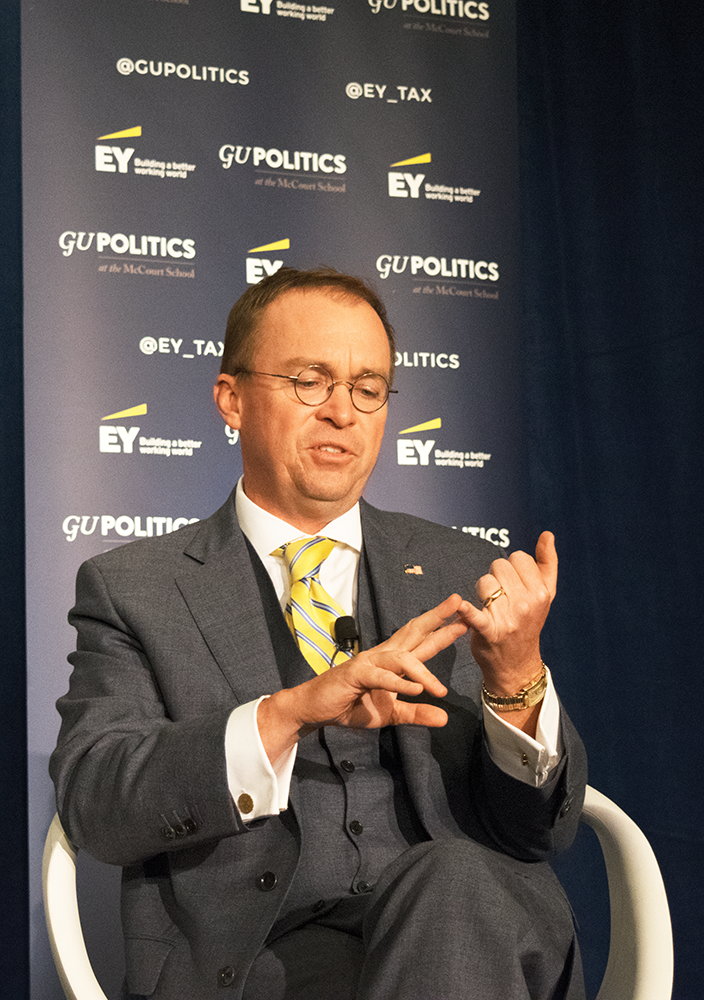 Mulvaney highlighted two pillars of the plan: reducing taxes for corporations and the middle class.

“At the end of the process, we will look at the final product with that same prism that we did going into, which is: is the corporate tax rate lower and is the middle class lower and simpler?” Mulvaney said.

Mulvaney said the administration’s attempts to rewrite the tax code will not dramatically increasethe national debt, which stands at $20 trillion.

The tax cuts provided by the policy amount to a $1.5 trillion cut in revenue, effectively adding that number to the deficit over a span of 10 years.

The nonpartisan Tax Policy Center, however, estimated in a Sep. 29 report that the bill will give the biggest tax breaks to individuals with the highest levels of income and increases taxes for those in the bottom 95 percent of income level.

“Do the rich get richer? Absolutely. So does the middle class, and so does the poor,” Mulvaney said.

In what might be the first significant legislative win for the Trump administration, the House of Representatives passed the budget bill that incorporates the tax reform policy Thursday, following the Senate’s passing of a similar bill last week.

The narrow 216-212 House vote will facilitate the bill’s passage as it goes through Congress. The bill will need a simple majority to pass in the Senate, since it is going through the process of reconciliation — a process that bypasses any attempts by Democrats in the Senate to filibuster legislation. Republicans hold a 52 person majority in the Senate.

Previously, he served as the U.S. Representative for the 5th District of South Carolina for six years. Now, as the director of the office responsible for budget implementation, Mulvaney is bolstering public support for the massive tax overhaul promised by Trump.

“What I have ended up doing now is selling [the plan] on television and to my former colleagues more than anything else,” Mulvaney said.

A former member of the House Freedom Caucus, the conservative wing of the GOP in the House, and characterized as a fiscal hawk for taking a hardline stance on spending, Mulvaney said he would raise revenues through the tax policy and limit spending. This model would account for losses in tax revenues through reduced government expenditure and greater individual spending.

“I can’t leave the status quo, then I won’t know what my numbers are. I either raise taxes and hope I raise more money like that. Or, being a good Republican, I lower taxes to raise more revenues that way,” Mulvaney said.

Mulvaney highlighted the complexity of the current tax code, specifically when evaluating the tax brackets that apply to the middle class. Mulvaney said the tax system should be simpler for middle-class earners.

The current tax code contains seven marginal brackets ranging from 10 percent to 39.6 percent. The proposed plan will reform the system of have three marginal brackets of 12 percent, 25 percent and 35 percent, according to the framework provided by the U.S. Department of the Treasury.

Mulvaney said the framework outlines the objectives of rewriting the existing tax code.

“So that ‘pay less’ and ‘pay it simpler’ is one pillar. And the other pillar is this lower corporate tax,” Mulvaney said.

The tax reform plan proposes simplifying the middle-income brackets and giving tax breaks to the highest earning families and corporations in the country to incentivize spending and investment.