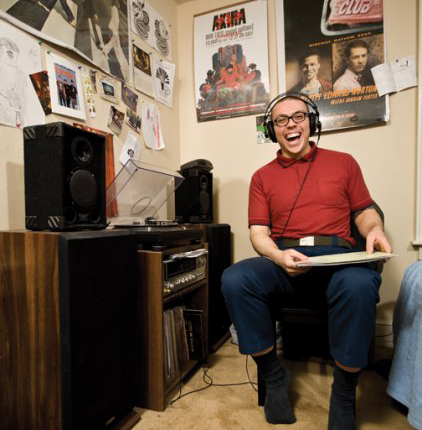 Memes are the future of the music promotion business because they help connect artists with their fans, American professional music critic Anthony Fantano said at an event hosted by the Georgetown University Lecture Fund on Jan. 25.

Fantano, who calls himself “the internet’s busiest music nerd,” launched his music vlog “The Needle Drop” in 2007. The vlog features music reviews and weekly music roundups and has over 1.2 million YouTube subscribers.

At last week’s event in Pedro Arrupe, S.J. Hall, Fantano spoke about emerging trends in music promotion and music engagement in the internet age, especially the role of internet memes, in helping musicians promote their work.

Fantano said memes and popular music both make use of memorable catchphrases and notable imagery that resonate with fans and followers.

“Music and memes share a very common virality,” Fantano said. “In the same way that a meme is shared again and again because you love it and you think it’s hilarious, that’s how people share music, if you really love a song. Music, unlike a movie, or sculpture, or painting, is so easily shareable, just like a meme.”

In recent years, Fantano said, the industry has seen an increase in the feedback loop between songs and internet culture: more memes come from songs, and more songs come from memes.

Some artists, most notably the rapper Drake, reference popular internet memes in songs and music videos, while others write lyrics aimed at making a splash online. Fantano allued to rapper Bobby Shmurda’s fame owing in part to a dance move he makes in a 2014 music video. Fantano also noted artists such as Justin Bieber, Lil Pump and XXXTentacion.

“Music has always had this portability to it that I think memes also share. So it’s pretty easy to share it with your friends, show it to your friends and, if you’ve got a sound system, show it to a large number of people,” Fantano said. “A lot of the things that end up being memes or end up becoming memetic in a way are catchy one-liners, lyrical phrases.”

Fantano said the music business’s adoption of memes can form closer relationships to fans. He pointed to the band Death Grips’ interaction with fans on social media as an example of an increased connection between the music industry and its fans.

“When artists embrace the meme, it creates these opportunities for interactions with their fans,” Fantano said.

The increased use of memes in the music industry, though nontraditional as a way to connect with fans, should be embraced and supported, according to Fantano.

“If you have people memeing, I would say embrace that fully,” Fantano said. “Share it, interact with it, spread it yourself. Take part in it, because what that is a signal of is that there’s a community out there having fun with what you do.”

Ultimately, Fantano said, the rise of memes in the music industry reflects consumers’ desires to have a greater engagement with the music they are enjoying.

“People want to have fun; people want to have a good time; people want to instantaneously create a viral thing and have an experience outside of the thing that they’re enjoying,” Fantano said. “When you’re sharing something like this and you’re contributing art and commentary and satire and jokes to a community of people enjoying a thing, in a way, it’s like taking what you’re enjoying outside the isolation chamber.”