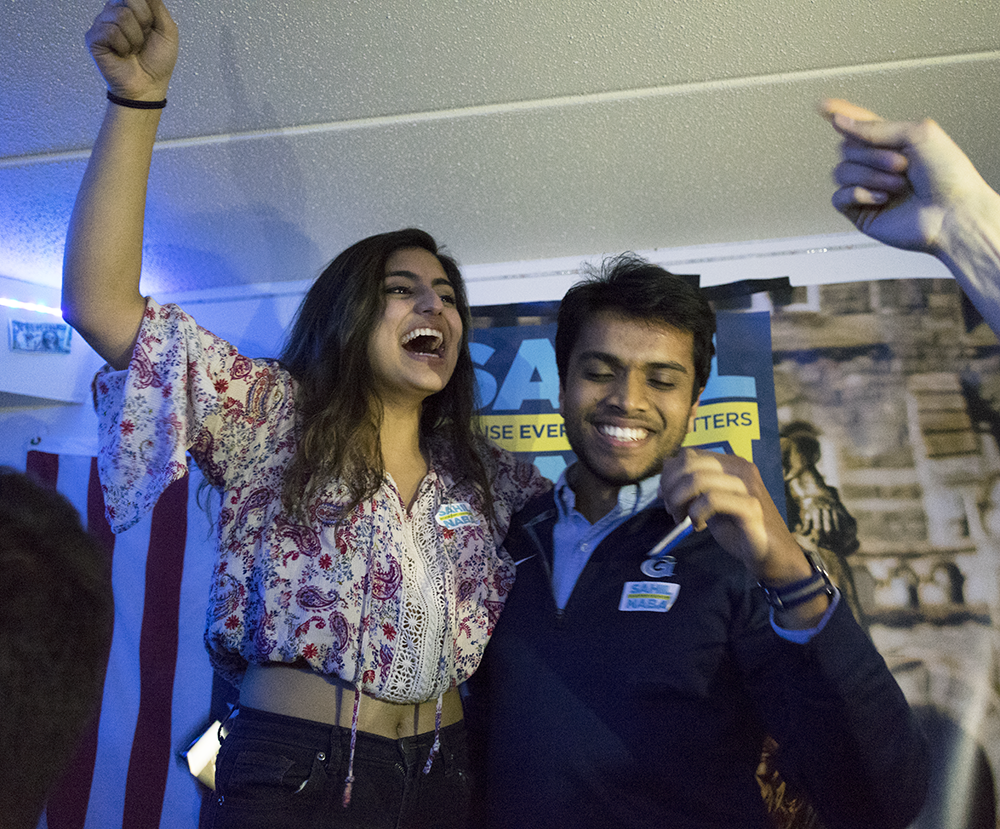 Sahil Nair (SFS ’19) and Naba Rahman (SFS ’19) have been elected president and vice president of the Georgetown University Student Association by a razor-thin margin of 36 votes.

Nair and Rahman are set to be the third consecutive nonwhite GUSA executive pair when they take office March 9, replacing current GUSA President Kamar Mack (COL ’19) and Vice President Jessica Andino (COL ’18). Before Mack and Andino’s predecessors, Enushe Khan (MSB ’17) and Chris Fisk (COL ’17), the GUSA executive had not been led by two nonwhite students since at least 1998, according to GUSA Historian Ari Goldstein (COL ’18).

Per GUSA’s single transferable vote system, if no ticket receives an outright majority in the first round of voting, a runoff takes place between the top performing tickets. First-choice votes for the least successful candidate are redistributed to the second-choice candidates and so on until one ticket receives a majority.

In the final round of voting, Nair and Rahman received 1,267 votes, marginally surpassing Sirois and Doherty, who received 1,231 votes. Nair and Rahman’s margin is among the tightest in recent memory, with echoes of last year’s election: Mack and Andino won in the fourth round last year by 34 votes after coming in second place in the first round.

Results in the election were delayed Thursday night after the second-place candidates Sirois and Doherty raised concerns with the GUSA Election Commision about Nair and Rahman, alleging Nair and Rahman exceeded the $300 budget limit for executive candidates through their social media expenditures.

Sirois said his campaign does not plan to file a formal complaint with the Election Commission. The campaign did not address emailed questions from The Hoya regarding whether they accepted the election results Thursday night.

On election day, the Nair-Rahman campaign paid for Facebook advertisements and Snapchat filters as part of their campaigning. The campaign provided documentation to the Election Commission reflecting that their expenses came under the $300 campaign limit, but the Sirois-Doherty campaign alleged they had concealed larger payments.

Aaron Bennett (COL ’19), campaign manager for Nair and Rahman, said early Friday morning that the allegations against the campaign are “baseless.”

“We’re incredibly grateful that we earned the majority of the student body’s support tonight. Many thanks to all of our supporters, as well Logan and Jonathan as well as Hunter and Richard — both of whom graciously conceded on election night,” Bennett wrote in an email to The Hoya. “While disappointed in baseless allegations, we are excited to assume leadership of student government at Georgetown and are confident that Sahil and Naba will serve this campus valiantly and effectively as Executives.”

The Sirois-Doherty  campaign released a statement on Facebook on Thursday afternoon saying “we are confident that we will be able to continue advocating for the issues that affect students without an elected office.”

“Though our campaign may be over, we will never quit fighting to move Georgetown forward. We hope that the new administration learns to value GUSA’s work as much as we do,” Sirois and Doherty wrote in the statement, which does not mention Nair or Rahman.

However, he and Election Commissioner Grant Castle (SFS ’21) acknowledged the Election Commission has always had limited capacity to investigate candidates’ finances, particularly in this case when it comes to social media technology.

“There’s an ambiguity that it is, in our opinion, impossible to determine exactly what happened with the social media technology,” Castle said. “We have to act in good faith that they are being honest about what they reported.”

Castle said the GUSA senate should now pass a bylaws resolution to prohibit the use of campaign finances for social media advertisements in future elections. Willard, who has worked on the Election Commission for four years and graduates in the spring, went a step further.

“The whole issue in general of campaign finance is something that is desperately, really really desperately broken and needs to be fixed,” Willard said. “I am of the personal belief that of all the campaigns I have seen in four years … Of the candidates that spent the maximum amount of money, there is a strong chance that some of them just didn’t report additional expenses. Because there’s no way for us to check.”

Willard added, “I’m not sure if this is a widespread phenomenon; I’m absolutely sure it’s been done. And it’s broader than this election. It needs to be really critically looked at.”

Conflicts over election results are not uncommon. The election of former executives Khan and Fisk in 2016 was embroiled in conflict long after election day, and the results of a constitutional referendum were voided by the Constitutional Council in January 2017 after allegations that the referendum did not follow GUSA bylaws.

The GUSA senate will hold a vote to confirm Nair and Rahman on Sunday.

At an election night party in Henle Village, Nair and Rahman heard of their victory in a call from outgoing executive Mack at about 2:30 a.m. Moments after receiving the news, Nair said in an interview with The Hoya that he was pleased to see their inclusive campaign succeed.

“I’m feeling exhilarated and humbled. I’m at a loss for words,” Nair said. “Georgetown made their voice heard and we proved that every voice matters. We proved that it doesn’t matter if you’re a GUSA outsider.”

Overall voter turnout was 39 percent, according to the GUSA Election commission. Rahman said the ticket’s participatory platform incorporated students who would not otherwise participate in GUSA elections.

“I don’t believe this happened, I’ve been looking forward to this moment for the longest time and it’s here and I can’t believe it,” Rahman said. “A lot of people voted for us who don’t usually vote for GUSA and that shows the power GUSA has. We are excited for the year ahead.”

The pair said their first priority in office is reaching out to as many students as possible and fostering effective dialogue.

“We want to be the people’s executive and we’re excited to do that,” Nair said.