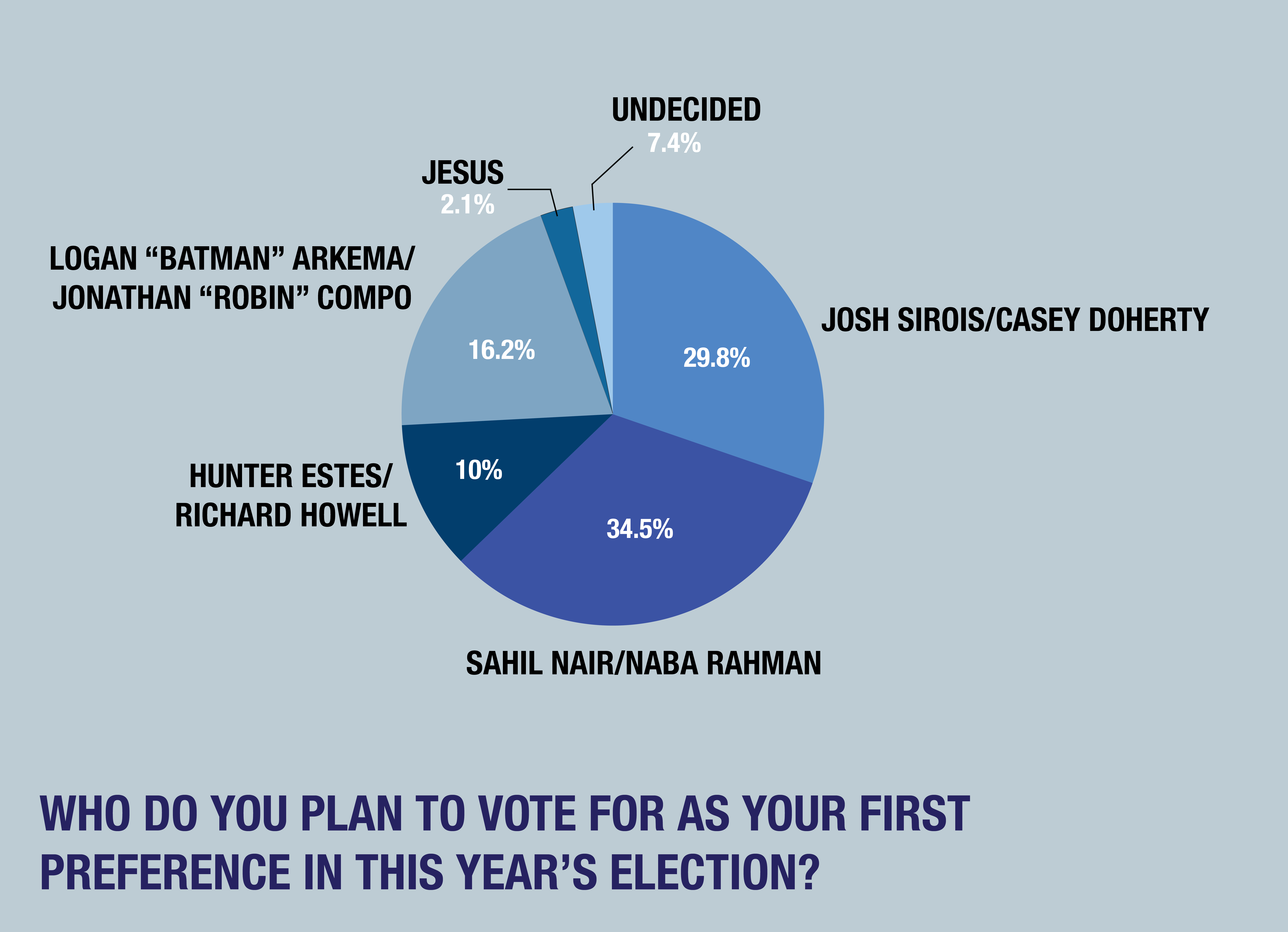 Sahil Nair (SFS ’19) and Naba Rahman (SFS ’19) narrowly lead the race for Georgetown University Student Association president and vice president, according to a door-to-door poll of 601 students conducted by The Hoya on Tuesday evening.

Satirical candidates Logan Arkema (COL ’20) and Jonathan Compo (COL ’20), who are running as the comic superheroes Batman and Robin, came third in the poll with 16.2 percent support. Hunter Estes (SFS ’19) and Richard Howell (SFS ’19) came in fourth place with 10 percent of likely voters. 2.1 percent supported Jesus as a satirical write-in candidate and 7.4 percent were undecided.

The near-deadlock poll result suggests no candidate will receive a majority of votes in the first round. Per GUSA’s single transferable vote system, if no ticket receives an outright majority, a runoff is conducted between the top performing tickets. The ticket with the lowest vote total is eliminated and their votes are redistributed to the remaining candidates based on voters’ indicated second preferences until one ticket receives a majority.

The election is set for Thursday, Feb. 22. Students can vote all day on HoyaLink or at a polling booth planned to be set up by the GUSA Election Commission in Red Square or the Leavey Center.

In past years, elections have hinged on which candidates are broadly popular among other candidates’ supporters. Current GUSA President Kamar Mack (COL ’19) and Vice President Jessica Andino (COL ’18) won by 34 votes last year after receiving the second-highest vote total in the first round. They took first place in the fourth round of voting after votes were redistributed from the third-place ticket, John Matthews (COL ’18) and Nick Matz (COL ’18), who, like Mack and Andino, pitched themselves as “GUSA outsiders.”

Before the election, the Mack-Andino ticket and the Matthews-Matz tickets had each encouraged their supporters to vote for the other as their second preference.

All four tickets have included affordability in their campaign platforms, though none more emphatically than Estes and Howell, who identified cost as the first of their three campaign planks.

Nair carried a majority of the 81 likely voters who indicated diversity and inclusion as the most important issue in the campaign: 54.3 percent, compared to 27.2 percent for Sirois, 9.9 percent for Arkema, and 1.2 percent — one student — for Estes. Nair and Rahman have promoted the theme of diversity and inclusion throughout their campaign, running with the campaign slogan “Because Every Voice Matters.”

By a 4.4-point margin, more respondents were indifferent or unsure about Mack and Andino than about their predecessors, Enushe Khan (MSB ’17) and Chris Fisk (COL ’17), according to a 2017 poll by The Hoya. 13 percent more respondents in 2017 were indifferent or unsure about Khan and Fisk in 2017 than about their predecessors, Joe Luther (COL ’16) and Connor Rohan (COL ’16), in 2016.

Although the polling method is not scientific, it was designed to reduce sample bias and provide transparency for demographics.

More than 25 Hoya staff members administered the anonymous survey Monday evening in all campus dormitories and apartment buildings and in townhouses on streets in west Georgetown selected for their high proportion of student residences. Polling began at 8:00 p.m. and was completed by 10 p.m. The schedule and locations for polling were not announced beforehand.

Read the full results and methodology of The Hoya’s 2018 GUSA poll here.