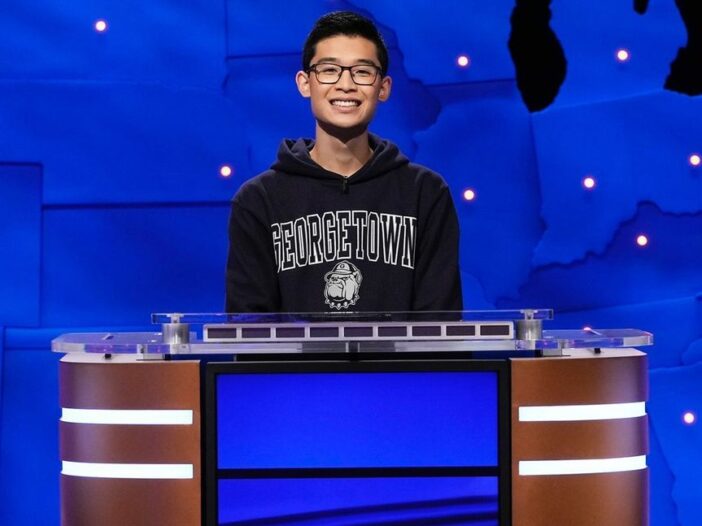 Vu won the quarter final round on Feb. 16 with a final score of $17,000 after correctly answering trivia questions about topics including Marvel, current events, literature and three-syllable words. The win advanced Vu to the semi final competition that aired Feb. 17, where he was ultimately eliminated. Vu won $20,000 as one of the eight semifinalists to be eliminated.

After his success in the initial quarter final competition, Vu said he was proud of his performance but wanted to stay calm and prepare for the following rounds of competition.

“It was definitely exciting to be moving on, but I also wanted to keep my head in the game as I knew I had a game after that,” Vu told The Hoya. “I wanted to stay as focused as I could, but I tried to give myself a little bit of a breath for a celebration to show off for the university and win a game of Jeopardy on live TV.”

The Jeopardy! National College Championship, hosted by actor Mayim Bialik, gives 36 college students the chance to compete against one another for the grand prize of $250,000. The final round will air Feb. 22.

Vu and his family are avid Jeopardy fans — his brother even competed on the official Jeopardy show in 2016 but did not advance to additional rounds — so when the opportunity to apply for the show arose, Vu took the chance.

“We used to watch it pretty much every night in high school,” Vu said in an interview with The Hoya. “I already had an idea that I wanted to try at some point. It just was more of a matter of when and where makes sense for me.”

Vu decided to apply for Jeopardy after seeing an advertisement for the college tournament in 2020. Vu said the audition process consisted of a timed test in October 2020, followed by a strictly proctored second test in January 2021 and a mock game audition over Zoom in March 2021.

Going into the audition process, Vu kept his expectations low.

“I didn’t want to get my hopes up in any sense, especially because I had idea of the sheer number of people that ended up auditioning,” Vu said. “I knew there was always a chance, as long of a shot as it was, so I just wanted to enjoy the process.”

Vu found out that he was being considered for the show in September 2021 but did not get confirmation that he would be competing until November, the same month he flew to the Culver City, Calif. set to film the show.

Vu said that he did not prepare excessively beyond reviewing authors, authors’ works and state and country capitals.

“There was definitely not a point where I thought, ‘I need to prepare for this audition in case I get on the show or to maximize my chances,’” Vu said. “For the show I prepared a little bit, but I didn’t want to psych myself out too much.”

Filming took less than a week and involved a lot of waiting around and watching the filming of other games, according to Vu.

“It wasn’t a live audience for this event. It ended up being just the other competitors and a lot of their crew,” Vu said. “It was surreal to be on that stage, or to be in the approximate area in the audience and watching that happen.”

Vu’s first game was filmed in the afternoon, which meant that he spent the morning nervously watching his competitors and waiting.

“It got more and more stressful to wait and sit on set, but during the games, it was kind of fun to even just quietly play along by myself in the Jeopardy live audience in the Jeopardy studio,” Vu said.

Donning a Georgetown sweatshirt while competing, Vu said that it was exciting to have the opportunity to represent the university at the famous competition.

“It was definitely super exciting and super cool to show up for the university specifically, but also to show up for myself,” Vu said. “Especially with how hyped-up the episode ended up and everything, I hope I made Georgetown proud.”