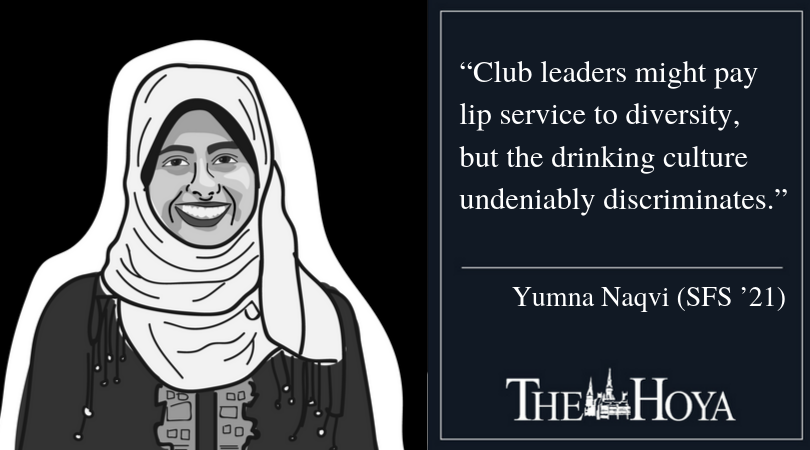 All students are welcome to apply to student organizations at Georgetown University. But in many clubs, only students who drink feel welcomed to stay.

The lack of recognized fraternities or sororities at Georgetown means clubs tend to serve as a substitute for these organizations and very often perpetuate a drinking culture.

For students who don’t drink — often because of religious beliefs — the drinking culture can be isolating and discriminatory.

Leaders of student organizations have a responsibility to ensure their members have a fair chance to participate in the cause or community their clubs boast. Club leaders should consciously examine their social events and offer various bonding activities that do not involve alcohol.

The consequences of an ingrained drinking culture are steep, driving some students who don’t drink out of the organization. Former International Relations Club member Cheyenne Martin (SFS ’21) left the club because nearly all of IRC’s bonding activities included alcohol, conflicting with her Protestant beliefs. Mahir Pasha (SFS ’21) left IRC for the same reason.

Besides pushing students to leave, perpetuating a strong drinking culture has the dangerous potential to compromise the integrity of club application processes. Georgetown University Alumni and Student Federal Credit Union rejected a qualified Muslim candidate because she might not have felt comfortable at parties, according to Cole Brown (COL ’18) in a 2017 op-ed.

Make no mistake: The drinking culture in Georgetown’s student organizations is not a harmless case of college kids having fun, but rather has bred a system that sustains its social scene by turning a blind eye to the students it isolates and deliberately discriminates against.

Student organizations were not formed merely to provide students with attractive parties but instead as a source for students to explore their ideas, career interests and hobbies. Student leaders are abysmally failing to uphold the missions of their respective organizations if talented club members are not being accepted into organizations or are quitting them because of alienation.

Although club members are quick to argue that students don’t have to drink alcohol to participate in social events, the setting can still be uncomfortable. “There was nothing to do at [IRC’s] bonding parties except to drink, and I never felt welcomed unless I had a solo cup in my hand,” according to Martin.

Moreover, some religious traditions have guidelines on the presence of alcohol; for example, in the Shia tradition I follow, Muslims are not allowed to be seated at a table where alcohol is being consumed — a nearly impossible feat at a party.

For many students who choose to remain in a club despite its drinking culture, the only solution is to avoid social functions with alcohol — essentially, nearly all of them. Accordingly, assimilating into the organization and forming friendships can take much longer than it does for members who drink, which means being disconnected from a close-knit environment.

Additionally, advancing in such an organization presents another set of challenges. Leaders in clubs are often expected to host pregames. Though other members may host instead, the unwritten expectation that leaders be present in the social life of an organization may deter students who don’t drink from seeking promotion.

Only by requiring an equal number of dry bonding activities can club leaders begin to rectify the damaging consequences of their willful ignorance and allow students who don’t drink to fully engage.

I only felt incorporated into my campus extracurricular activity after nearly a year, largely because I avoided events involving alcohol. Still, I was fortunate to serve in a section of the club in which brunch is the primary bonding activity. If brunch had not been such an ingrained, near-monthly tradition, I would have likely quit, exhausted by working in an organization in which I felt like a stranger.

Activities such as brunch or game night are simple substitutes for events at which alcohol is the primary attraction. In fact, clubs are increasingly making an effort to include dry bonding activities; GUASFCU implemented a policy in 2017 to match events including alcohol with a dry one, according to Chief Executive Officer Kuran Malhotra (MSB ’20).

Still, clubs should not wait until being criticized on this issue, or until the rare occasion that a nondrinking student makes it into its leadership, before making changes to their organization.

Drinking is an inevitable facet of college life. But the ingrained drinking culture within Georgetown’s student organizations — often overpowering the purpose of the club — is unreasonable and demonstrates a callous disregard for students who don’t drink.

Yumna Naqvi is a junior in the School of Foreign Service. Sacred Space appears online every other Wednesday.