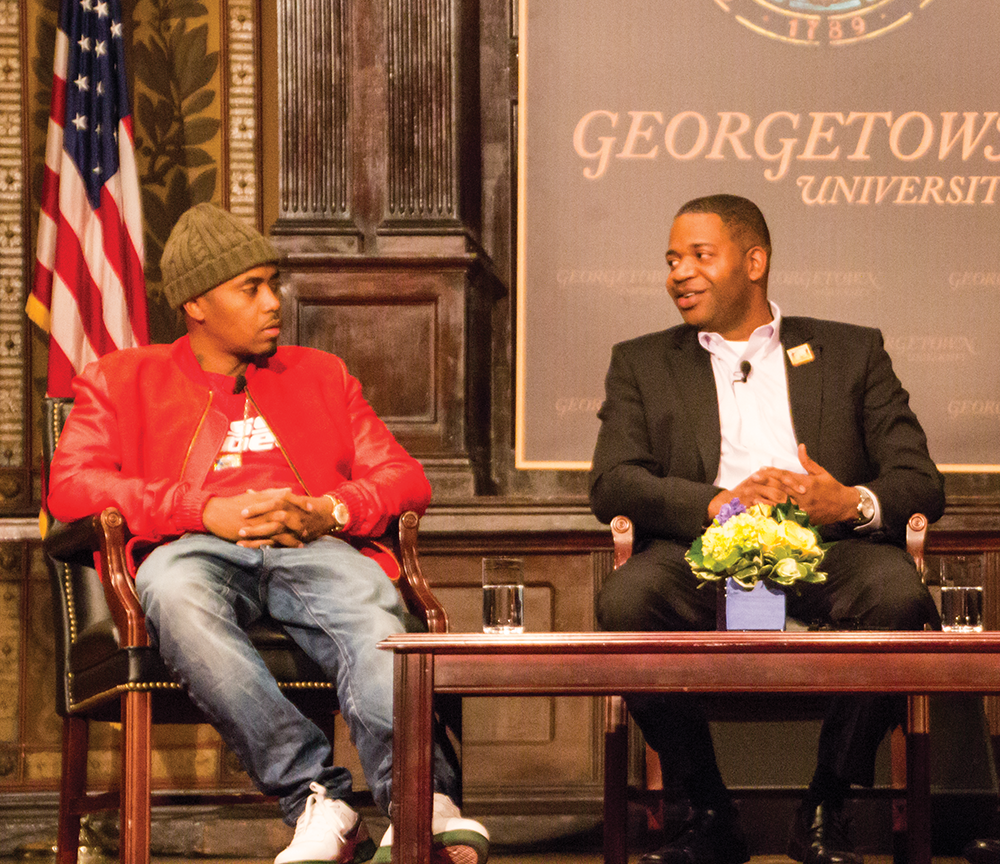 “It’s an amazing opportunity in my career to be here in Gaston Hall at this university and to sit between the greatest black intellectual of our time and the greatest emcee of our time,” Peterson told a capacity crowd.

The former was Dyson, a prolific commentator who made national headlines with the introduction of the course “Sociology of Hip-Hop — Urban Theodicy of Jay-Z” in fall 2011. The latter was Nasir “Nas” Jones, the legendary hip-hop artist from Queens, N.Y., who has sustained a career over two decades as an icon of his craft.

The three discussed the state of hip-hop and Nas’ acclaimed catalog for more than an hour, but the main focus of the night was a defense of Nas, and those like him, to rightfully appear in a venue like Gaston.

Hip-hop in academia has indeed met resistance, as evidenced by a provocative 2011 column in The Hoya in response to Dyson’s new course — Steven Wu’s (COL ’12) “Jay-Z Not a 21st-Century Homer” (A3, October 31, 2011). When asked why Nas belongs in the college classroom, Dyson argued that Nas ought to be held among the greatest artists and writers in history.

“Just as we study Hemingway,” Dyson began, listing off a series of illustrious literary names, “and just as we study Homer,” he concluded, drawing raucous approval for what may have been a subtle dig at Wu.

“We’re sitting in the presence of greatness,” Dyson continued. “Recognize.”

Speaking in his signature low, raspy voice, Nas appeared moved by the occasion.

“When I first started, I thought it would be cool to speak at colleges, but that it would never happen,” Nas said. Now, he has a hip-hop fellowship in his name at Harvard University and is performing at the Kennedy Center on Saturday to promote the rerelease of his classic debut, now called “Illmatic XX,” on its 20th anniversary.

Nas recorded what many consider his magnum opus, “Illmatic” in 1994, as a teenager. Now 40, he has maintained a reputation as what Dyson calls “a rhetorical genius,” up through his most recent release in 2011, “Life Is Good,” which received universal acclaim. Nas has released 11 albums and sold more than 25 million records, all while maintaining an artistic integrity that many during the question-and-answer period praised with nostalgia. Such regret for the downward evolution of rap led Nas to declare on his 2006 album title “Hip Hop Is Dead.”

Dyson has written extensively on the significance of hip-hop artistry and culture, and in 2011, he co-edited the book “Born to Use Mics: Reading Nas’s Illmatic,” which offers academic perspectives on what is considered to be among the greatest rap albums in history. Nas told Dyson on stage that he never finished reading the book because it was overwhelming to read such complex analysis of his own life.

Hundreds lined up for the event, many of whom were turned away despite arriving hours in advance. For half an hour before the event, those in Gaston were treated to a set of Nas classics performed by the renowned DJ-turned-Harvard-educator 9th Wonder. There was a mix of young and old in attendance; the first question of the night came from a seventh grader, while another came from a man who said he raised his children on Nas.

Kat Kelley (NHS ’14), a prominent women’s rights advocate on campus, asked Nas about his recent tweet likening feminism to the mafia. He explained that in hip-hop, “the mafia” is a metaphor for a venerable squad, with icons such as 2Pac and the Notorious B.I.G. using phrases like “the mob” routinely. Their exchange highlighted the ongoing tendency of hip-hop vernacular to be lost in translation with some audiences.

Nas and Jay-Z engaged in one of hip-hop’s most notorious feuds in the early 2000s over the right to the title of “King of New York.” In Jay-Z’s diss record “Takeover,” he famously challenges Nas’ thoughtful and introspective lyricism with the line, “Your s*** is garbage / What you tryna kick, knowledge?”

When Patterson announced the conclusion of questions, dozens of audience members pleaded to be heard. (They were somewhat put at ease when Dyson announced that Nas had agreed to return to Georgetown, next time at a bigger venue on campus.)

“It’s so crazy to hear you say I have knowledge or wisdom. I know some people who would beg to differ,” Nas replied in response to one of the final questions.

When Nas concluded his response, Dyson noted what every in the crowd was probably thinking: “Man, that was some wisdom.”