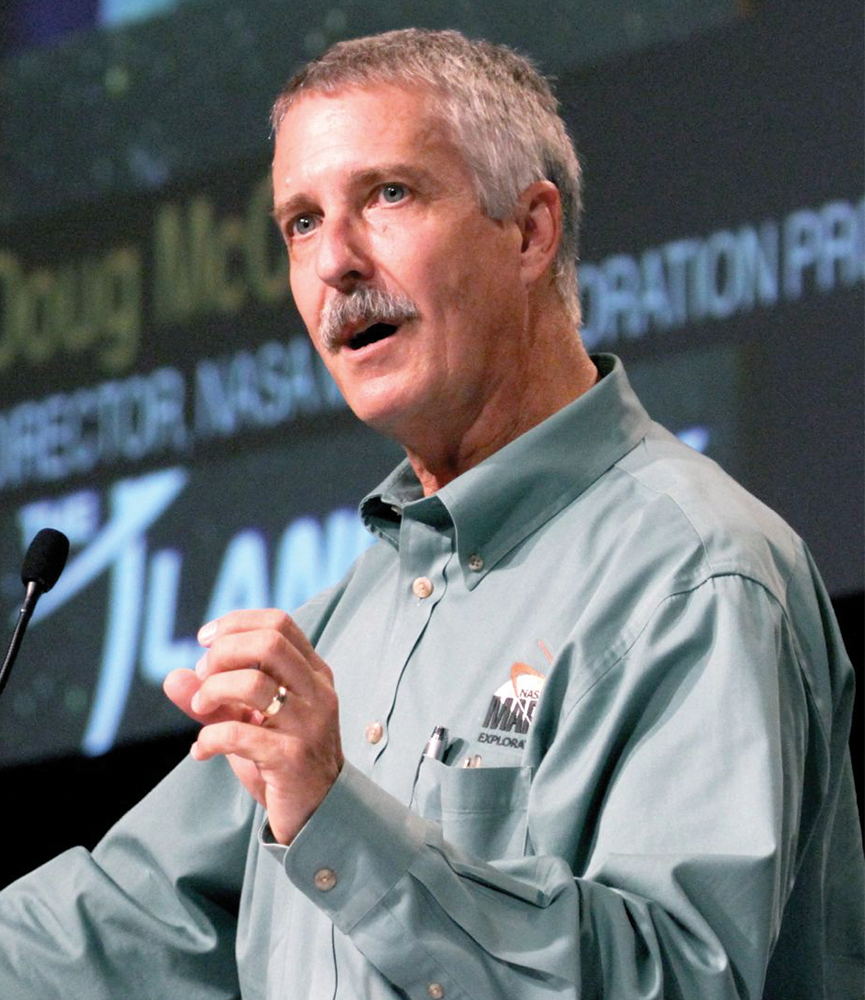 Former Director of NASA’s Mars Exploration Program Doug McCuistion outlined the historical evolution of Mars exploration and discussed its future challenges in Reiss Science Building on Wednesday. The lecture was moderated by Georgetown professor of planetary science Sarah Johnson and presented by the School of Foreign Service’s science, technology and international affairs program.

According to McCuistion, the original purpose of the Mars Exploration Program was to find evidence of running water on the planet’s surface. Scientists have long observed patterns on its surface resembling dried-out riverbeds and deltas like those on Earth.

However, it was not until last September that NASA confirmed traces of liquid water on the planet’s surface.

“Mars had an atmosphere much like Earth’s, we believe, and it needed to to be able to have water present in a liquid form on the surface. It’s lost its atmosphere and one of our big questions … is where did it go,” McCuistion said.

Many scientists theorize that the planet’s magnetic field deteriorated to such an extent that Mars’ atmosphere, along with its water, was blown away by solar winds. Some suggest that the Earth will undergo a similar process of desiccation billions of years from now.

According to McCuistion, NASA’s next program objective is to determine the existence of Martian life. He is cautiously optimistic that Mars has sufficient water to support life given what the scientific community has discovered in analogous terrestrial environments.

“We find life in the Arctic and Antarctic that comes alive during a few short, warm summer months and then goes dormant again. Sometimes you may not even recognize it except for the long-chain carbon compounds and proteins that identify it as life when it’s in its dormant state,” McCuistion said. “There’s nothing to say that stuff is not living below the surface here. The question is getting to it.”

As the study of Mars continues, existing technologies are revealing new discoveries. The most recent Mars rover, Curiosity, is the size of a Toyota Corolla, making it the largest of all Mars rovers sent up in the past. McCuistion described the final landing stage of the rover’s eight-month journey to Mars, which began on Nov. 26, 2011.

Curiosity landed within a designated 8-mile-by-3-mile oval on Mars’ surface, a dramatic improvement in precision over the Spirit’s target 93-mile-by-12-mile landing area.

McCuistion also stressed that NASA will soon have the capacity to put a human on Mars.

“We can do this,” McCuistion said. “We put a metric ton on the surface safely and accurately, and nobody’s ever done anything like that. We know how to do this.”

McCuistion explained that getting a human to Mars would require a landing mass of 60 metric tons. Despite the higher costs and risks associated with human missions, the potential scientific rewards are immense.

He argued that NASA’s future efficacy depends largely on the willingness of Congress in appropriating funds for its budget.

To better utilize its current funding, McCuistion suggested that NASA hand over the operational costs of the international space station to the European Space Agency, saving NASA $3 billion per year.

When a student asked how civilians could help NASA, McCuistion argued how the public both needs to re-engage with the excitement of space and continue to push legislators.

“Talk to your neighbors. Talk to people about the things that are going on that we’re doing and how exciting it is. And talk to your congresspeople; they’re the ones that really make the difference,” McCuistion suggested.

Deep Dheri (MSB ’16), who attended the event, said the possible evolutionary parallel between Earth and Mars is one of the most important takeaways from the lecture because it might illuminate our planet’s future.

“Mars can actually be a blueprint for what the Earth will look like,” Dheri said. “And if that’s actually true … what does that mean for us? Do we need to leave, can we adapt, can we do something differently?”

Alexander Coopersmith (COL ’19), who attended the event, said the future for space exploration is bright.

“There’s so much more to explore. We’ve done so much already, the future is amazing up there. Be excited for what’s coming next.”