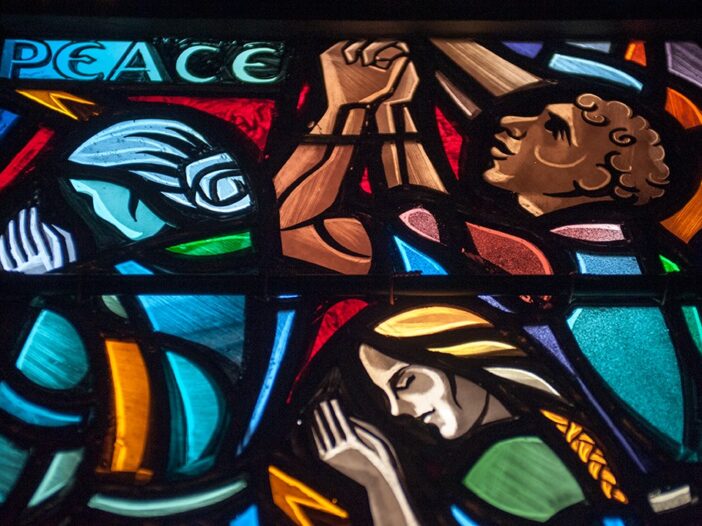 The Washington National Cathedral will install new stained-glass windows by 2023, depicting the fight for racial equality in America. The installation will be accompanied by a poem inscribed in stone, according to a Sept. 23 announcement. The new art will occupy the space once held by windows honoring confederate generals Robert E. Lee and Thomas “Stonewall” Jackson, which were removed in 2017.

The Washington National Cathedral formed a task force to decide the future of the Confederate stained glass following a 2015 shooting at a historically Black church in Charleston, S.C. After the 2017 “Unite the Right” white supremacist rally in Charlottesville, Va., the task force ultimately decided that the windows should be replaced with art that did not exclusively center on white historical perspectives, according to Kevin Eckstrom, chief communications officer at the Washington National Cathedral.

“The task force felt very strongly that they wanted to use that as an opportunity to make a statement and not just put up windows for windows’ sake but to tell a story, and to tell a richer, more vibrant story, about America,” Eckstrom said in a phone interview with The Hoya.

The confederate-themed windows told a version of American history that needed to be reevaluated, according to the Very Reverend Randolph Marshall Hollerith, dean of the Washington National Cathedral, in the cathedral’s press statement.

“For nearly 70 years, these windows and their Confederate imagery told an incomplete story; they celebrated two generals, but they did nothing to address the reality and painful legacy of America’s original sin of slavery and racism,” Hollerith said in the press statement. “They represented a false narrative of what America once was and left out the painful truth of our history.”

The task force asked Kerry James Marshall, a leading contemporary artist known for work that centers on Black Americans, to participate in the project, who agreed to design new stained glass windows that will tell a story that celebrates the history of Black America, according to Eckstrom.

“One of his animating themes is to finally represent Black Americans who have been left out of a lot of art over the centuries,” Eckstrom said. “He celebrates the average, ordinary, everyday dignity of Black America, and he does it in a really unique way.”

Marshall said his goal is to make a meaningful addition to the Washington National Cathedral through his art.

“The themes that the Cathedral committee articulated set a great challenge for me as an artist and as a Black American man,” Marshall said in the press statement. “The goal is to make truly meaningful additions to an already rich and magnificent institution, to make the changes they have embraced truly worth the effort.”

Elizabeth Alexander, who recited her poem “Praise Song for the Day” at President Barack Obama’s 2009 inauguration, agreed to write a poem that will be engraved in stone in conjunction with the new stained glass window display, according to Eckstrom.

“She has been a voice of moral clarity on this issue, and we wanted her to be involved in this project any way we could,” Eckstrom said. “Then when it became clear she was interested in also doing some poetry, it all kind of came together.”

Alexander, in addition to being a renowned poet, is the president of the Andrew W. Mellon Foundation, an organization that provides grants to individuals and organizations promoting the humanities.

Replacing the confederate windows with art centered around Black American history is only the beginning of a larger project to create a more inclusive space within the Washington National Cathedral, Eckstrom said.

“This is really the start of a much larger project to reimagine what stories are told in this sacred place where America gathers at pivotal moments,” Eckstrom said. “Ultimately, we want everyone to see themselves in the building and to see their stories told in the building so that it feels like home for them.”