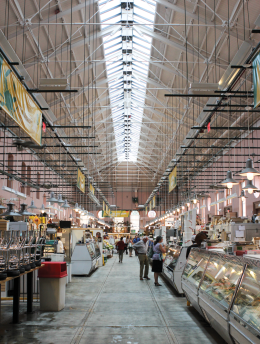 In the final section of Michael Pollan’s book, The Omnivore’s Dilemma, the well-known journalist and food intellectual writes about his attempts to create a meal using only ingredients he foraged for, produced or hunted himself. After baking his own bread, hunting down the pigs for the entree and gathering wild mushrooms in the woods, he prepared a complete multi-course dinner without the help of mass production or pre-packaged convenience.

While the labor and efforts of Pollan’s task are worth applauding, the prospect that Americans will practice this lifestyle on a daily basis is far from realistic. However, Pollan’s point was not to convince consumers to drop their credit cards and grocery bags and pick up their hunting weapons and shovels; rather, he aimed to show that, like the average fast-food meal, his from-the-earth meal is “equally unreal and equally unsustainable.”

For Pollan, the purpose of his hunter-gatherer dinner was to showcase the sources of food we eat. In today’s society, where fast-food joints exist on every street corner and processed foods line supermarket shelves, we have little knowledge about where our food is coming from, how it is produced or what it costs in terms of both dollars and our health. Identifying the true agricultural components of the food we consume each day has become an almost impossible feat.

Many remain ignorant of the behind-the-scenes life of the farms, factories and manufacturers that produce the items on our dinner plates. Fortunately, for those in search of greater food consciousness, farmers markets eliminate the middleman by allowing consumers to interact and buy directly from their food’s producers.

Over the years, the rise in farmers markets’ popularity has produced a surge in the number of markets sprouting up across the country. The nation’s capital has been no exception to this trend. Once-empty parking lots and overcrowded sidewalks have now been transformed into must-stop destinations for locavores, passionate home cooks and amateur gourmets. From Dupont Circle to the White House, D.C. offers shoppers a variety of markets not only in location but also in size, selections and seasonality. Whether one is simply looking for the ripest strawberries to layer in a luscious fruit tart or the right wine and cheese pairings for a  cocktail party, shoppers at the District’s markets would make Michael Pollan proud

Dupont Circle: Open every Sunday morning, the Dupont Circle farmers market is an affiliate of D.C.’s FRESHFARM Markets. This network operates multiple producer-only farmers markets across the District, Maryland and Virginia. Promoting the food and tastes of the Chesapeake Bay region, the Dupont market opens up at 8 a.m. in the warmer months with vendors selling a wide range of products. From artisanal gelato and yogurt smoothies to chocolate pudding and empanadas, there is something to be found for breakfast, lunch, dinner and dessert. Local bakeries display buttery croissants and crumbly scones alongside loaves of fresh bread and other decadent pastries. In addition to interacting with vendors and sampling local fare, one can observe cooking demonstrations by local chefs. Conveniently located right outside the Metro station, this market is the perfect stop on a Sunday morning.

Where: 20th Street NW between Massachusetts and Connecticut Avenues

U Street: It may not be one of the biggest markets, but the 14th and U Streets market definitely has its fair share of loyal shoppers. The market’s intimate setting contrasts with the eclectic jazz scene of the U Street Corridor, but it offers up essentials, including (among many others) local cheese from Cherry Glen, fresh bread from Panorama Bakery and ripe fruits and vegetables from McLeaf’s. After stocking up on ingredients, you can donate to local charity Martha’s Table. Although small in size, the market  has reasonable prices, and the quality of its products outshines anything at your local Safeway.

Where: 14th and U Streets NW

White House:  Since arriving in D.C., first lady Michelle Obama has been a strong advocate for healthy and local eating. With her support, FARMFRESH Markets launched another location, this time right by the White House. Not coincidentally, the market opened on the same day the USDA launched the Farmers Market Promotion Program, a $5 million-per-year grant program dedicated to helping local markets grow. Now in its second year, the market is still relatively small compared to others nearby, but a complete meal can be produced from just one shopping spree. Like all of FARMFRESH’s affiliates, the White House market provides double dollars for food assistance recipients to ensure that everyone has access to nutritious and affordable groceries.

Where: Vermont Ave NW between H and I Streets

Eastern Market: Located in the Capitol Hill neighborhood, Eastern Market is the District’s oldest continuously operated fresh food public market. Consisting of outdoor vendors touting handmade arts and crafts and an indoor food hall, the market prides itself on its commitment to supporting local producers. Many of the products sold at Eastern Market are grown or produced in rural counties of Maryland, Pennsylvania, Virginia and West Virginia. Inside the food hall, customers will find an array of products representing different ethnic cuisines. Thinking French? Then buy a block of fresh chèvre or a wedge of brie. For a Spanish flair, order some jamón serrano for a tapas party with friends. If the Greek islands call your name, then there is plenty of lamb to be bought for a satisfying Mediterranean meal. If you can, stop by Market Lunch inside the hall any weekday morning (except Monday, when it is closed) and order up a plate of blueberry buckwheat pancakes. Made fresh each morning, the pancakes are perfect for a day of shopping.