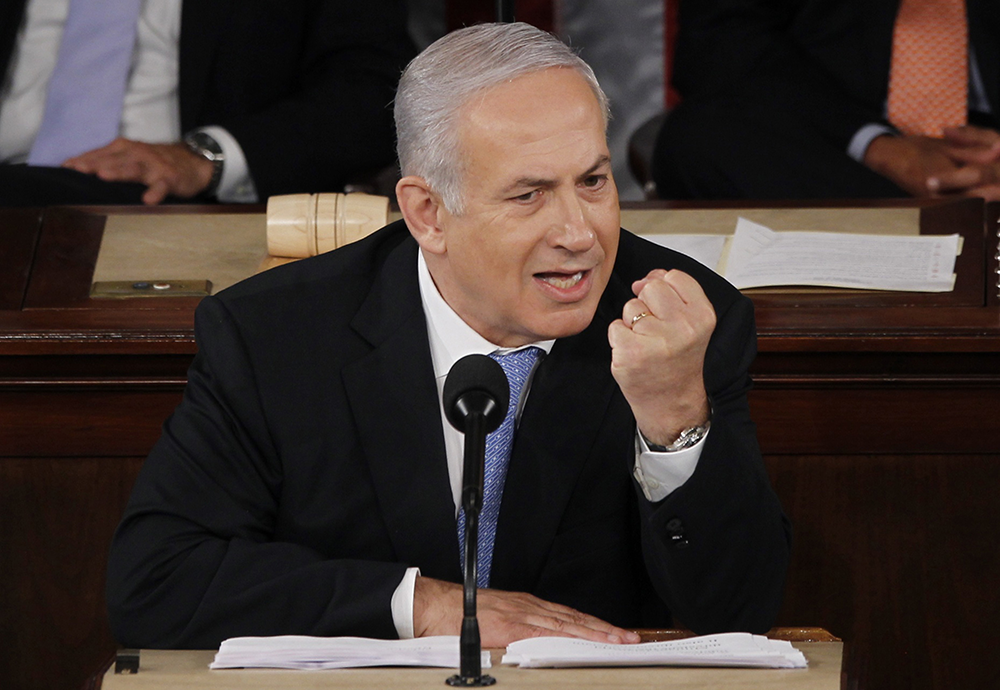 Israeli Prime Minister Benjamin Netanyahu’s visit to Washington, D.C., to speak to a joint session of Congress on Tuesday sparked a national debate about the politicization of Israel’s relationship with the United States and drew criticism from student organizations at Georgetown.

In his speech, which comes in advance of Israeli legislative elections March 17, Netanyahu will address the ongoing negotiations over Iran’s nuclear program, urging the United States to take a stronger position in the talks. Speaker of the House of Representatives John Boehner (R-Ohio) invited Netanyahu to speak in an unprecedented move, as it is customary for the president to invite foreign leaders to make speeches before Congress.

Accordingly, Netanyahu’s visit has been criticized for dragging Israel into U.S. partisan divides, particularly as the relationship between the United States and Israel has largely remained a bipartisan priority despite increased polarization in Congress.

“From a bipartisan perspective, Israel is one of the few issues that has bipartisan support in Congress and by accepting a predominantly right-wing based offer — as an individual not representing Georgetown Israel Alliance, my greatest fear is turning Israel into a partisan issue,” GIA President Harper Weissburg (SFS ’17) said.

President Barack Obama will not be attending the speech and has declined to meet with the prime minister during his visit. Forty-one congressional Democrats and Senator Bernie Sanders (I-Vt.) are reportedly planning to boycott the speech because of the politicization of the meeting.

J Street, a national organization describing itself as “pro-Israel, pro-Palestine, pro-peace,” published a full-page advertisement in The New York Times that called for Netanyahu’s speech to be postponed until after the Iranian negotiations and the Israeli elections, which will both occur in the middle of March. Molly Wartenberg (SFS ’16), co-president of Georgetown’s J Street U chapter, the student arm of J Street, noted the fraught timing of the speech.

“We would be happy for Netanyahu to come to Congress and present before them and speak to them but this moment in time it’s just not extremely appropriate essentially because there are these really sensitive negotiations occurring between U.S. officials and Iranian officials. Additionally, Israeli elections are around the corner,” Wartenberg said.

Netanyahu, however, addressed these contentions during a speech to the American Israel Public Affairs Committee on Monday, maintaining that his speech does not aim to specifically aid any Republican agenda.

“As prime minister of Israel, I have a moral obligation to speak up in the face of these threats while there is time to avert them,” Netanyahu said. “My speech is not intended to show any disrespect to Obama or the esteemed office that he holds. I have great respect for both.”

Ari Goldstein (COL ’18), who serves as marketing and external secretary for GIA but did not speak on behalf of the organization, attended Netanyahu’s speech at the AIPAC policy conference. He said that the speech did not reflect partisan issues.

“I think it sent a really strong message of unity and bipartisanship around the core interest and values which are so fundamental to the U.S.-Israel relationship, and that’s what he should have done,” Goldstein said.

Netanyahu’s speech coincides with the Georgetown Students for Justice in Palestine’s Israel Apartheid Week, an annual event held at universities around the United States that protests the Israeli occupation of the West Bank and Gaza Strip through the construction of an apartheid wall in the Intercultural Center Galleria. The week at Georgetown will run from March 2 to March 6.

SJP President Leila Shebaro (SFS ’15) also expressed discontent with Netanyahu’s invitation to Congress, although she was dissatisfied by the close relationship between the Israeli leader and the United States rather than the politicization of the partnership.

“I don’t know if you could find another leader with the same kind of record of human rights violations that consistently gets such a warm reception from American politicians,” Shebaro said.

As part of the week’s events, SJP members will gather on the West Lawn of the U.S. Capitol Building to protest Tuesday’s speech.

However, the SJP has faced criticism that the week, and especially the apartheid wall, is polarizing for the use of the word “apartheid” and its perceived accusatory nature.

“When an apartheid wall goes up on campus, it is an inflammatory symbol that polarizes the conversation, and it saddens me that it puts my club in a position to seem like we’re diametrically opposed to Students for Justice in Palestine, when we’re not,” Weissburg said. “We don’t get to say, ‘Oh, and I personally believe this about Netanyahu’s speech.’ We do not have the privilege of being nuanced.”

Shebaro emphasized that any open discussion of the Israeli-Palestinian conflict would bring up strongly opposing viewpoints but said the week would encourage honest reflection.

“I think that there is a difference between being antagonistic and simply being honest and being willing to have the physical conversations,” Shebaro said. “There’s nothing about what we do that we want to be unwelcoming to anyone. Our goal is really just to open up the dialogue so people feel they can have an honest conversation about the reality of the situation.”

Despite the national polarization of Netanyahu’s visit, J Street U Co-President Natalie Magioncalda (COL ’16) hoped that the university would be a place for finding common ground.

“There is so much rhetoric on both sides, and we are trying to find that space where people on all sides of the spectrum can find that common ground because there is a lot of common ground,” Magioncalda said. “It’s just very hard to see through it when you have these polarizing aspects.”