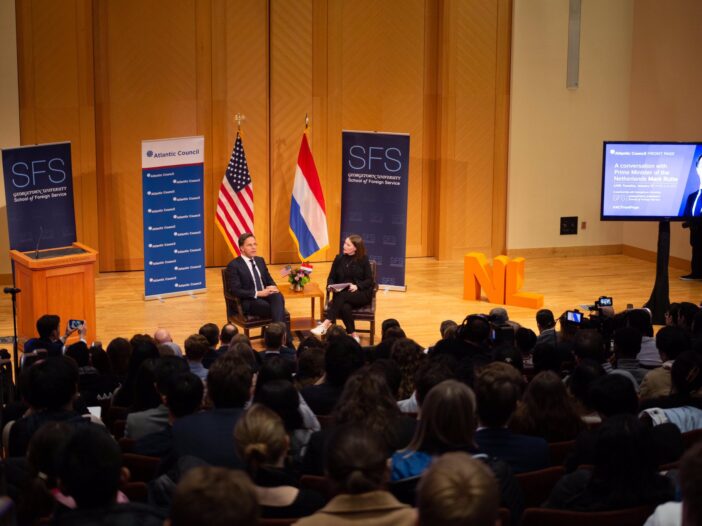 The Atlantic Council, a think tank focused on international relations and economic development, organized the Jan. 17 event in partnership with the School of Foreign Service (SFS). Rutte spoke on a few ongoing Dutch foreign policy initiatives in a discussion that explored the extent of the Netherlands’ support of Ukraine during the war, his collaboration with NATO, the legitimacy of government tribunals and hybrid warfare tactics. Jörn Fleck, a senior director with the Europe Center at the Atlantic Council, introduced Rutte at the event, which was moderated by Amy Mackinnon, a national security and intelligence reporter for Foreign Policy magazine.

Rutte said the Ukrainian cause is a top priority for the Netherlands because democracies should help protect other democracies across the world.

“What Putin is doing is running directly against our values of not colonizing another country, not force grabbing land of a country, not threatening freedom of speech and freedom of journalism. These are all sacrosanct in the Western world,” Rutte said at the event.

Much of the Netherlands’ current focus has been centered around directing financial and military resources toward assisting the Ukrainian fight for independence, according to Rutte.

Since the start of the war, the Netherlands has invested millions of euros into food, water, shelter and medical care for Ukrainians. The Dutch government recently doubled down on its financial support by committing another 2.5 billion euros in aid. Ukraine is also set to receive advanced military technology in the form of Patriot defense systems, surface-to-air missile defense systems, from the Netherlands.

Fleck said Putin underestimated the strength of Ukraine and its allies when he began his invasion of the country in February 2022.

“When Vladimir Putin ordered Russian troops into Ukraine in February of last year, he made two bad bets,” Fleck said at the event. “First, that Ukraine would quickly falter and second, that a fractured and weak West would stand idly by.”

Fleck said that over the past year, Putin’s idealized ambitions have largely fallen flat as Ukrainians have stood their ground.

“He lost badly. For nearly a year, the Ukrainian people have shown incredible courage and tenacity in fighting back against Russian attacks on their lives, their homes and hospitals. Ukraine stepped up and so has the West,” Fleck said at the event.

While Putin initially targeted population centers like the Ukrainian capital Kyiv, counteroffensive efforts have shifted Russian objectives toward the Donbas, a largely Russian-speaking region in eastern Ukraine, and the southern part of Ukraine along the Black Sea. Violent separatist movements in the region, many backed by Russia, have been occurring for the better part of the last decade.

Mackinnon said the conflict in Ukraine is not over, as new threats are on the horizon every day.

“Officials in Kyiv have been sounding the alarm that Moscow may be on the brink of announcing another mobilization ahead of a renewed offensive operation in the spring,” Mackinnon said.

In addition to warnings of increased Russian manpower, former President of Russia and fervent Putin ally Dmitry Medvedev recently warned of a nuclear attack in the event of a Ukrainian victory.

Rutte said international cooperation is critical for securing desirable results, as can be seen in Ukraine’s case.

The Netherlands promised NATO that it would spend 2% of its GDP on defense in 2014, according to Rutte.

“We followed with a commitment of five more billion,” Rutte said at the event. “We all have to do more, and the same goes for us.”

Rutte said Putin needs to be held accountable for the bloodshed he and his government continues to cause in Ukraine.

“At this stage when the Russian aggression is killing people, and again this week, over 40 people died and still 20 are missing, it’s so difficult for me to think about what to give to Vladimir so he is a bit less offended,” Rutte said. “No, he needs to stop this and his government needs to be brought to accountability.”

The Netherlands will fight until Ukraine is free, according to Rutte.