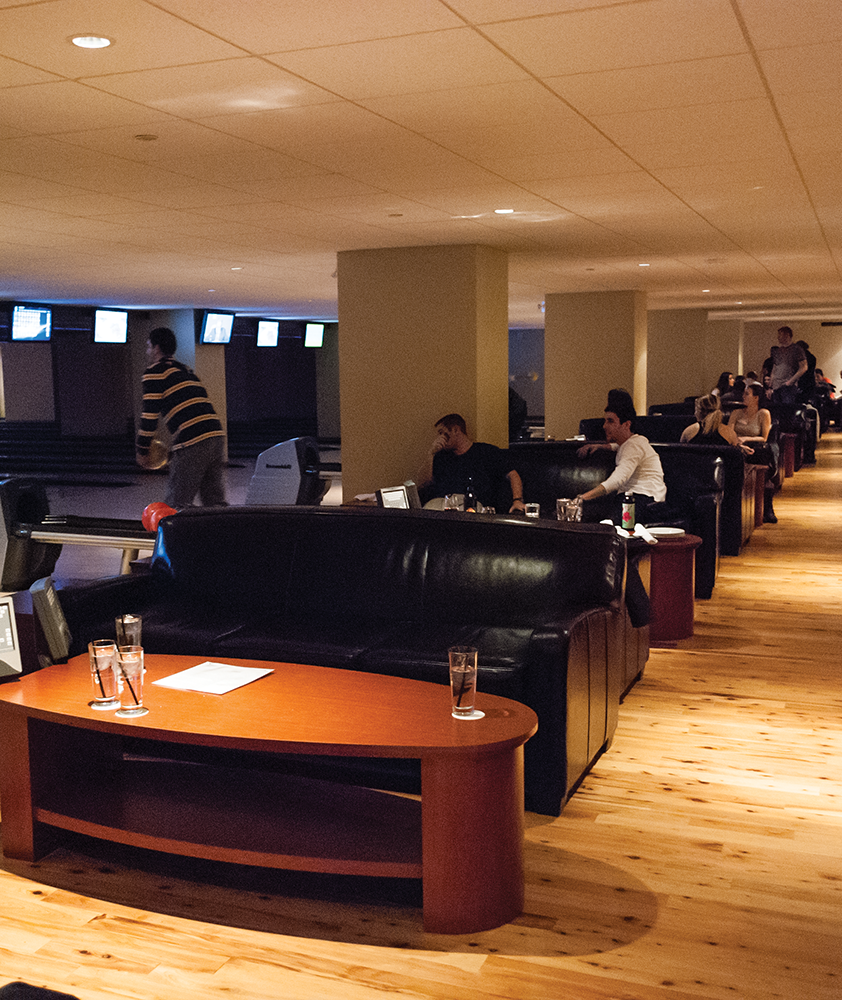 Evoking an image of luxury and class, Pinstripes, an Italian restaurant, bowling alley, and bocce club, opened its newest location in the Shops at Georgetown Park on M Street last Saturday.
Pinstripes was conceived by founder and CEO Dale Schwartz in 1987 while he was working for a venture capital firm in New York. However, the idea didn’t play out at the time and instead Schwartz moved into the biotech industry and founded his own natural pharmacy company Pharmaca Integrative Pharmacy Inc., in 2000. Finally in 2006, after immense emotional support from family and friends, Schwartz took the plunge and founded Pinstripes Inc., opening its first location in Chicago.
Eight years later, Pinstripes now has four locations across the Midwest in addition to its new Georgetown location, and another site set to open shortly in Overland Park, Kan.
Pinstripes’ M Street location was initially opposed by Advisory Neighborhood Commission 2E, whose commissioners cited concerns about noise levels near Georgetown Park Condominiums. The alley eventually won the approval of the Board of Zoning Adjustment in January 2013 after agreeing to strict sound requirements in its building code.
Schwartz says the company is looking at select markets all over the country, hoping to eventually operate 50 to 100 locations nationwide. Schwartz intends to open a handful of locations yearly until this goal is met.
Pinstripes specifically came to Georgetown to access the greater D.C. area. Schwartz added that he chose Georgetown because it is unique and gorgeous and because of its iconic Chesapeake and Ohio Canal.
Competing with other Italian restaurants in the Georgetown area in addition to the numerous other restaurants on M Street and

Wisconsin Avenue, Pinstripes aims to differentiate itself through the bowling and bocce aspect as well as its capacity to host large events.
“We can host sororities, fraternities, graduation parties, you name it. We can do events for 20 people; we can do private parties for 800 people,” Shwartz said. “Of course we can always do lunch, dinner and brunch for when students have parents or family in town. It’s a terrific venue to come and enjoy with the family.”
Having over 30,000 square feet of space makes the restaurant a prime location for events. Pinstripes plans to target public and private sector retreats, conferences and receptions in its upscale space, while also providing a unique entertainment experience.
Shwartz is confident in the success of the Georgetown location because of the uniqueness of the company’s business model.
Shwartz indicated that “the bowling and bocce is a differentiator for events” relative to other entertainment options in the area.
“Instead of just going to a hotel or a restaurant, the fact is that people can enjoy socializing with bowling and bocce during, before or after eating and drinking,” he said. “For a lot of our customers our food is strikingly good, so a lot of people come just to eat with us for lunch or dinner, but there’s added luxury of coming to eat and then playing bocce or bowling, or having a filet mignon and cocktail while bowling; it’s just a more dynamic space.”
Pinstripes aims to capture the college and young adult crowd through live jazz on Friday and Saturday nights with no cover charge, happy hour Monday through Friday, 3pm-7pm and 9pm till closing. Sunday brunch will be starting this week.
Students are enthusiastic about Pinstripes’ opening.
“I’m really excited to go bowl at Pinstripes,” Corey Hsu (COL ’16) said. “It harkens back to the days of high school and offers a new option in the already diverse scene that is Georgetown nightlife.”
In the near future Pinstripes is also looking to open locations in the Bethesda/Rockville, Md area and in Tysons Corner, Va.